The Quince Brothers are probably at their sleepiest in January.  The soft fuzz of their gentle snoozes can be heard in concert with the other snoozing trees in the garden. 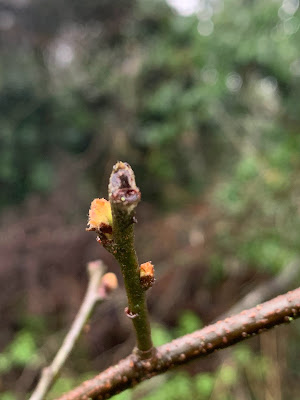 Yet whilst they are seemingly inactive there are already signs of life returning. As I stand in front of the trees, sinking a little into the rain sodden ground, the brown of the branches peppered in places by lichen are wet with the rain that has only just stopped.  There does not appear to be much going on with the trees other than the mirrored raindrops clinging to the tips of the branches.  I stand and sigh a sigh of no real meaning.  It is an exhalation in this moment of contemplation.  As I look and look more closely I realise I am focusing on the soft orange tufts that are a precursor to the new growing season.
As I stand and admire these tiny glowing amber torches I am reminded of days long ago when we used to go on holiday in our touring caravan.  I am thinking of the gas mantle lights that would light our evenings.  These fragile net-like structures gave the flame something to flare and light around.  If touched they disappeared into dust.  I loved making the unlit mantles disintegrate, their brittle frailty was fascinating.  It was also a selfish habit as it meant a new mantle had to be used.  Such thoughts never concerned me, there were always plenty more where they came from in that point of view that sees beyond the consequences of even tiny actions.
Back in the now these small glowing embers tell me that the tree is already thinking about what the new year will be. It is a sign of hope for the right amounts of sun and rain, for the hope of no harsh late frosts, and always the hope for enough bees to pollinate and so enable the future harvest of quinces.  Like a carefully knitted blanket each thread has to play it’s part to hold together the future of this year's quince harvest.  Each stitch adding its own dimension to create something more beautiful  than the sum of its parts. What these quince trees need to thrive is known, but the particular balance of how each are experienced this year is knowledge we do not have.
Will there be quinces? Will both trees bear fruit?  Will there be enough to make quince jelly?
Time will tell.
More followed trees can be found here courtesy of Squirrelbasket.
Stay safe and be kind.
For more from the Blackberry Garden follow me on Twitter Facebook and Instagram
quest for a quince the Quince Brothers tree following