The new Arcardia Garden at Chatworth

It was a busy week when I was invited to go with the Garden Media Guild to visit the new Arcadia Garden at Chatsworth House, but Chatsworth is relatively close to home and a place I have visited often over the years and I am very fond of it. 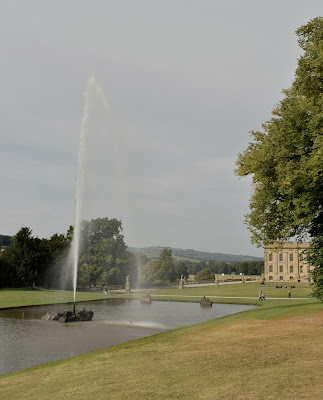 We were here to visit two specific areas of the garden, but it is against the law to go to Chatsworth and not take a photo of the Emperor Fountain, which is gravity fed from the huge lakes that supply the Chatsworth water features.  To call them a feat of engineering is an understatement. 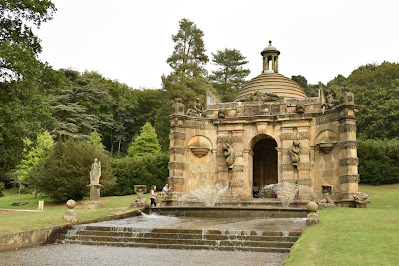 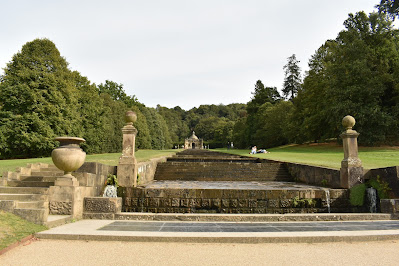 It is equally bad-mannered not to photograph the Cascade and to comment loudly that each step is engineered to make a different note of the water running over it. (oh yes, I watched Blue Peter as a child). 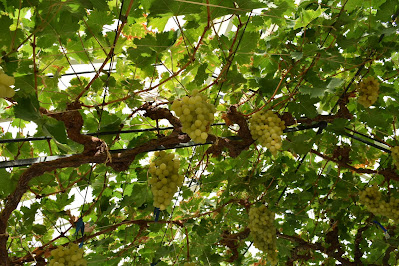 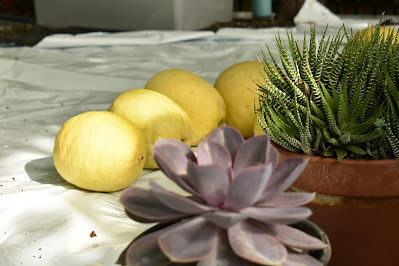 We started our visit being led by the Chatsworth Head Gardener, Steve Porter, who allowed a quick moment in the glasshouses to admire the vines and these huge lemons which are a cross between a lemon and a grapefruit.  It is hard for you to see how big they are in this picture, but they are the size of grapefruits. 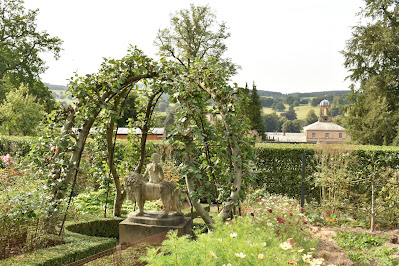 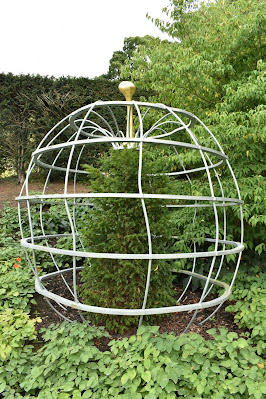 We had a quick sprint around the kitchen gardens on our way.  Is this not the finest topiary support you have ever seen? 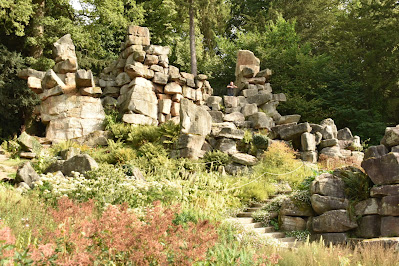 and then we strode into the three acre, newly designed replanting by Tom Stuart Smith, Rock Garden.  This garden was created for the 6th Duke following his trip to the alps with stones quarried nearby to Chatsworth. 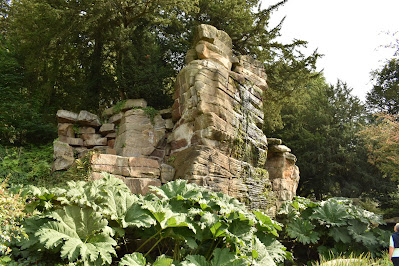 I have visited this garden many times but must confess I do not recall the planting at all, I think I have always been overwhelmed looking at the rocks.  This new planting scheme immediately balances the view by softening and enhancing the area.  Yet at the same time the planting does not look new and is gentle on the landscape. 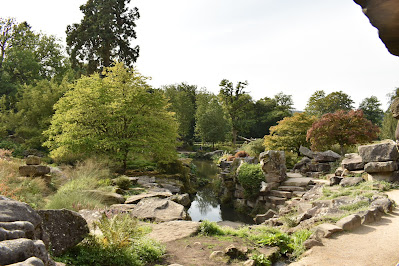 Trees were removed and new trees added and paths were reconfigured to make you wind through the garden more. 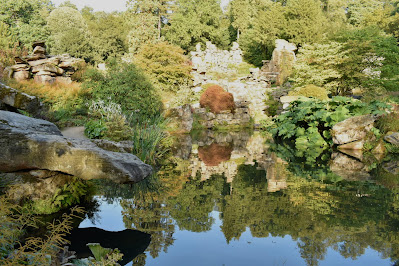 The effect is magnificent.  I think I could have spent hours in this part of the garden alone. 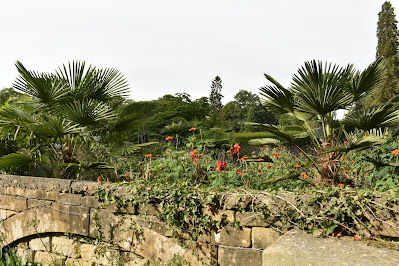 But this was not possible as we had a lot to see.  We moved on to visited the Maze, built on the remains of the Great Conservatory designed by Paxton.  This enormous conservatory took over four years to build and one planned explosion in in 1920 to destroy.  Sadly it just could not be maintained after the First World War due to the huge loss of life and impact on the economy at that time, the world had changed forever.  The low walls of the conservatory remain and now contain the maze and some wonderful planting surrounding it including some exotic planting as a reminder of its former glory. 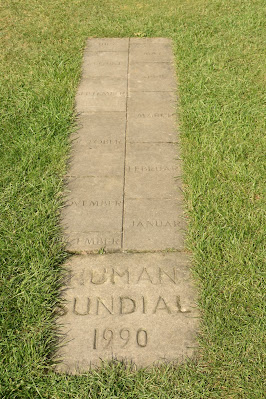 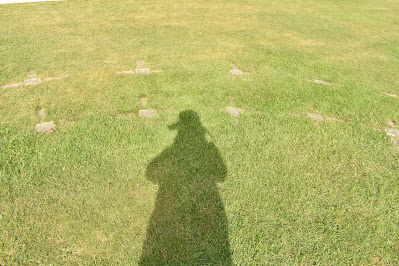 There is also the sundial which I just had to have a play with.  You stand on the stone and your shadow tells you time in relation to the semi-circle of stones around you.  I can tell you it was accurate too.
But we were here to see Arcadia and so I had to stop playing as we had to move on. 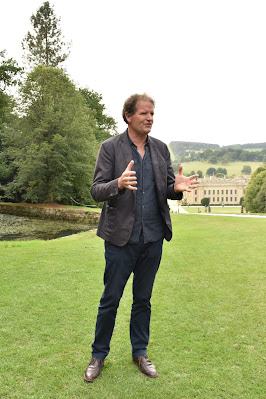 We were joined at this point by Tom Stuart Smith who was going to join with Steve to lead us through this new area. 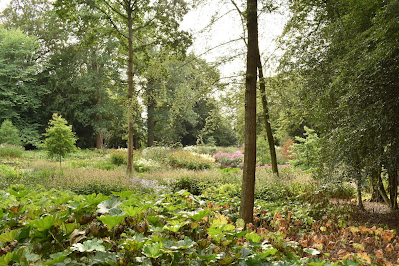 Arcadia is a sixteen acre piece of land that wraps along the top of the Rock Garden and Maze Garden.  It was the dumping ground for the soil spill for Paxton as he worked and was pretty much overlooked and as far as they know, never gardened.  Lots of trees had to be removed, but hundreds (yes hundreds) were planted.  This is the largest project carried out in the garden for over 200 years. 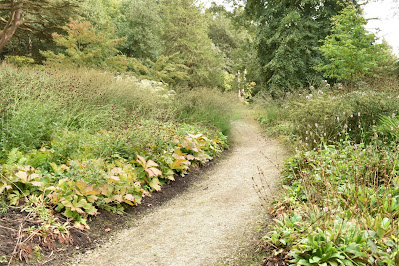 You walk along the paths that look well established, but the planting only began in Autumn 2019.  Much of the planting did not happen until the lockdown in Spring 2020, which meant that Tom had to direct from a distance.  The planting was carried out by the Estate team and the family also helped.  Whilst it is a huge Estate it is important to remember that it is also a family home, not one that bears any resemblance to my experience yet a home nonetheless.  To know that they personally got involved in the planting somehow made this thought real to me. 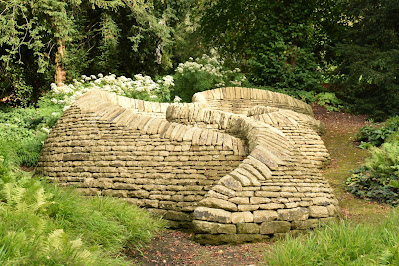 Chatsworth is famous for its art installations in the garden and these are naturally woven into this new space.  This was one of those sculptures I just wanted to put my hand on and feel, but it was roped off and we all know that we can be held at bay by a small piece of rope that you could step over or walk around without blinking. It has been so dry that there was some watering having to happen and this was from the same lake system that feeds the Emperor Fountain.  The network of underground pipes has many uses. 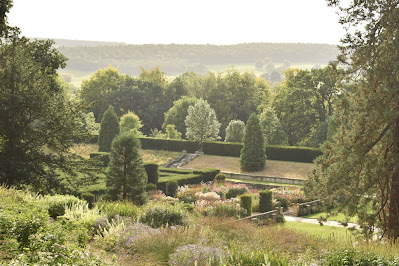 You look down onto the gardens below and it is all so beautiful.  It feels seamless. The new planting create a soft cushiony foreground to the more formal gardening below. 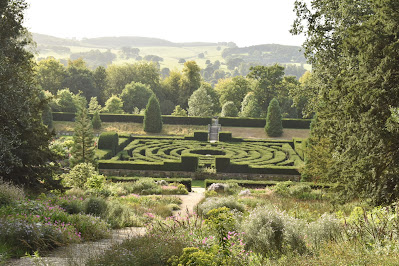 As the afternoon wore on the light decided to bathe the garden in a golden haze that almost silenced us, almost; whilst we stood and tried to photograph it in all its beauty.  We just kept saying wow as each new area of the garden overwhelmed us.  The general public has largely disappeared by this point and the sound of the birds in the trees just got louder and louder.  It was a moment to stand and breathe and just be. 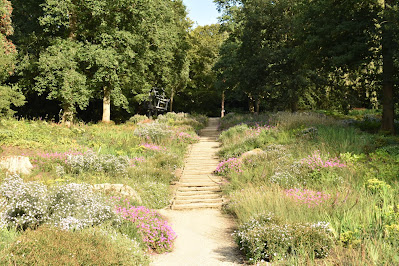 As we looked down at this point we thought about the stats about this garden which are quite astounding.  Obviously planting sixteen acres is going to take a few plants.  300,000 plants were planted, including trees, shrubs and over 24,000 perennials mainly from peat-free 9cm pots and bare-root.  This is no small project and the family were aided by support from Gucci. 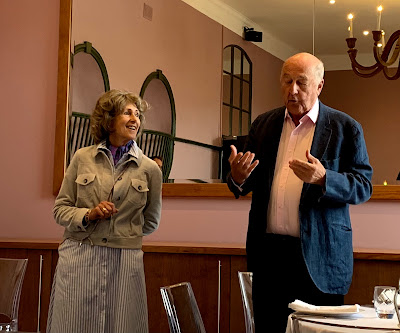 As I stood there and thought about so many plants, I thought back to the start of our visit where we had been welcomed by the Duke and Duchess.  They had explained how they had struggled to understand the scale of the gardens here at Chatsworth when they first took them over and that to them buying six plants seemed a lot, but here they needed thousands.  It is a very difficult concept to get my head around too. 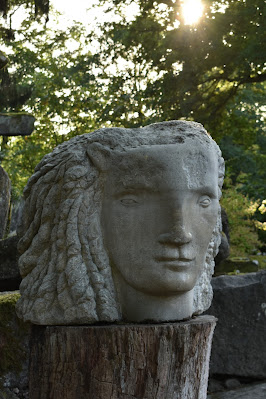 And the name?  Arcadia is a landlocked mountainous area of Greece and Chatsworth is in the middle of the country distant from all coasts and surrounded by the stunning Peak District.  Arcadian can mean idyllically pastoral – I can assure you that it is.  If you can visit then seriously you should, I know I will be returning again soon.
We had such an incredible day and huge thanks must go to the Duke and Duchess, Steve Porter and Tom Stuart Smith for their time and kind welcome.  I must also thank Redbrick Communications for organising the visit.
Stay safe and be kind.
For more from the Blackberry Garden follow me on Twitter and Facebook
Arcadia Chatsworth Chatsworth House Emperor Fountain Great Conservatory Joseph Paxton Paxton rock garden Tom Stuart Smith