"I'm sending off to New Zealand for some sweetpeas, do you want to order some too?" is the sort of question that will always elicit a predictable reply from me.  Sweetpeas were ordered.  Sweetpeas were destroyed as they entered the country, sweetpeas were resent and arrived safely. 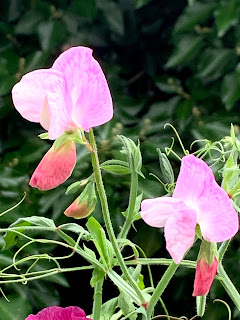 The seeds were ordered from Dr Keith Hammett who is a plant breeder in New Zealand.  Sadly the window of opportunity of buying his seeds is now closed to us in the UK as it is now too difficult to get through the customs restrictions.  We made our order just in time. I ordered/sowed three types: Enigma, Bix and Harbinger.  Of course a slight issue is that I have little idea what the climate is like in New Zealand.  I did do a bit of research and was fairly hopeful they should be ok if I grew them as I would any other sweetpea.  You can sit there thinking that this is all obvious but I could only be certain that it was obvious after checking.
I have written previously that I do not sow my sweetpeas often until quite late in the season.  I sowed a few Harbinger in March but I think mice ate them.  Luckily I rarely sow a whole packet of seeds in any one go so I had some left.  April you may recall was frosty and dry so I did not actually sow the rest of the seeds until early May.  They germinated well and soon were ready to plant outside.
They are now flowering really well.  I have grown them in a big container I used last year for growing beans.  I used peat-free compost and I have fed them regularly.  One of the joys of sowing late is that they keep flowering for longer. 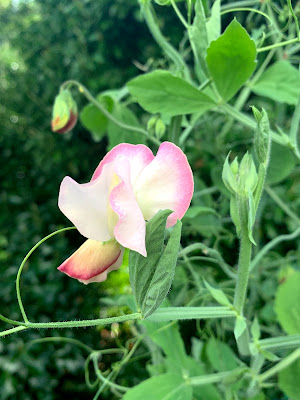 This is Bix, apparently named after the village where Keith's mother grew up. 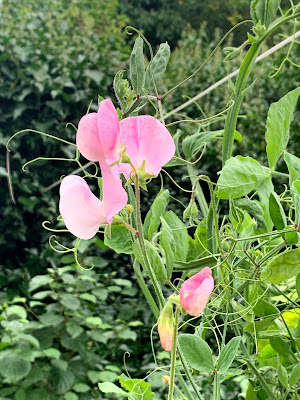 This is Engima, it has the most wonderful scent.  The stripe that is evident on the picture on Dr Hammett's website seems to be variable in the flowers: stronger on some that others.  It seems like the second set of flowers have it more pronounced than the first and they also fade into it as they age.  They fade rather prettily. 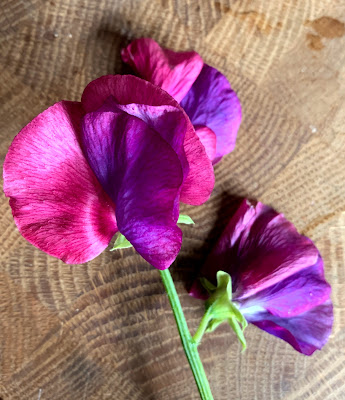 and this is Harbinger, which looks like Matucana in colour but is a larger and slightly more frilly flower I think.
This has been a fun experiment and such a shame that the door to further adventures is currently closed due to Brexit complications.  There are some very exciting dahlia seeds on the website, particularly the hybrid tree dahlias, that I would love to have a go at growing.  One day I can only hope that the doors will reopen.
I received my seeds through the kind auspices of Graham Rice who has written about his sweetpea adventure here.
Stay safe all and be kind.
For more from the Blackberry Garden follow me on Twitter and Facebook
Dr Keith Hammett Graham Rice plant breeder sweetpeas