By the time RHS Chelsea 2020 was cancelled it already felt inevitable that it could not go ahead.  I remember each cancellation of things I had in my diary feeling like another small weight being added to the already overwhelming sense of fear as the pandemic swept across the globe.  That the show could go on in September 2021 felt like a moment of hope, like some of the weights really are being removed. 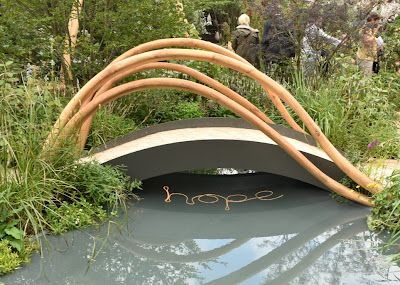 It did mean my first trip up to London in eighteen months, I have been on a train during that time but not on the underground.  I can’t say I ever look forward to going on the underground but a trip out still feels a very exciting thing and the prospect of an autumn Chelsea and what that might look like was just too good to miss.   I did my test on the day to be certain I was negative and off I went. 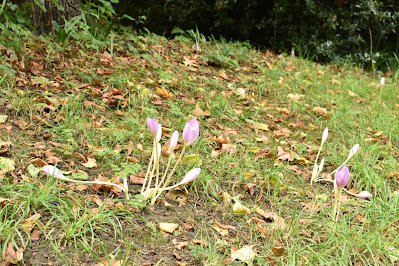 I am so glad I went.    It was interesting in itself to be walking around the grounds that I know so well in May but now with the Autumn Crocii starting to flower.  Signs of autumn were all around.  There was also a wasp nest or two to negotiate, we nearly sat on one but thankfully kind people nearby explained that the gap where no one was sitting was for a reason.
Anyhoo, where do I start…… 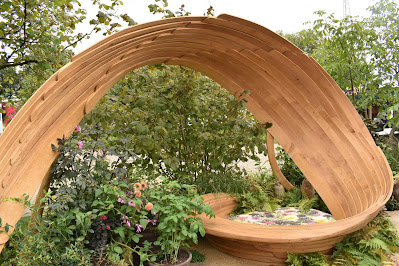 I shall start at the BBC One Show and RHS Garden of Hope designed by Arit Anderson.  Now I am going to be so bold as to name drop and say that Arit is a friend who I have known from before her Gardeners World presenting days.  I have followed her designing and presenting journey and never fail to stand and admire just how talented Arit is.  This garden is a triumph. 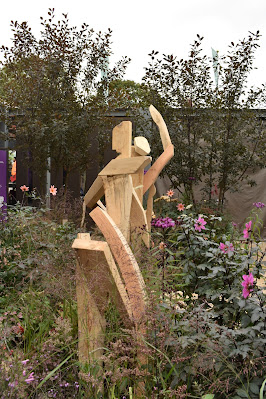 It was also fiendishly difficult to photograph as it was constantly full of people!  A sure sign of popularity.  Now I do admit to my bias, but I really love this garden.  The steam-bent wood sculptures wind through perfectly and are very tactile.  In this world of constant hand-sanitisation I could not resist putting my hand onto them. 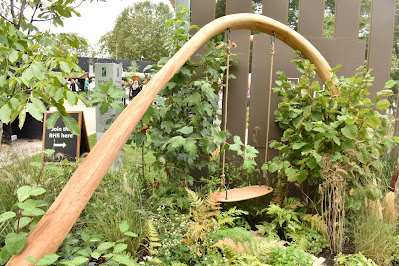 The garden will move to its permanent home after the show, the Mother and Baby Unit Rosewood. Part of the NHS Social Care Partnership Trust.  Even in the middle of this busy show ground there was a feeling of calm and peace in this garden. 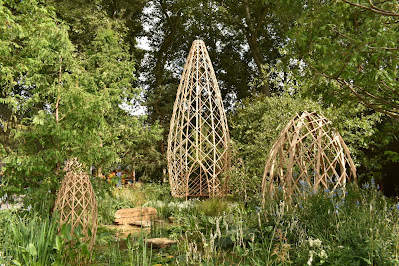 My second favourite garden, and it was a close second, was the Guangzhou China: Guangzhou Garden designed by Peter Chmiel with Chin-Jung Chen. 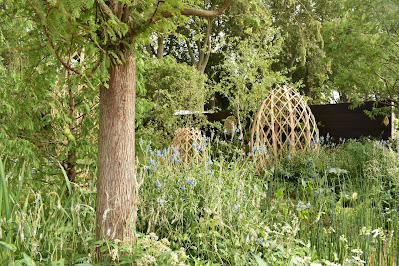 This garden has some of the most beautiful naturalistic planting I have ever seen combined with the steamed bent moso bamboo structures.  The point of the garden is about reconnecting people and nature, which seems very apt at the moment in particular .  That it won a Gold Medal and Best in Show was no surprise to me. 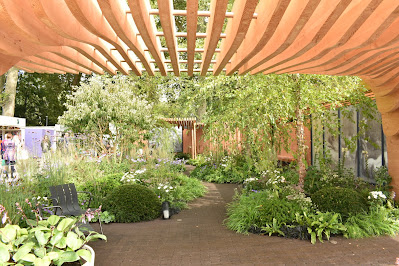 The Florence Nightingale Garden designed by Robert Myers is also a great garden. 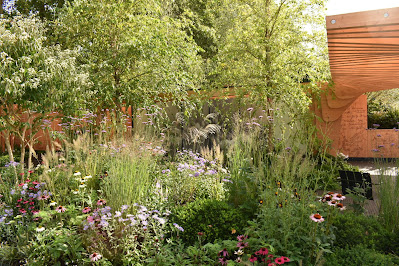 The garden marks 200 years since the birth of Florence Nightingale and is of course very poignant after the last eighteen months of the pandemic where we relied so heavily on the nurses and doctors of the NHS. 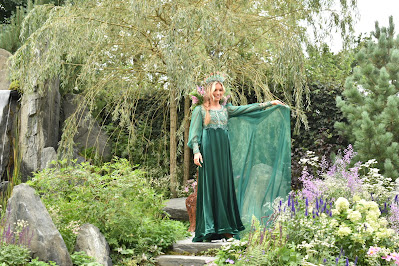 I also love the Bodmin Jail: 60o East - A Garden Between Continents designed by Ekaterina Zasukhina with Carly Kershaw. 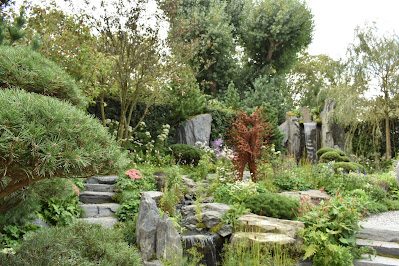 It is a stunning garden, superbly planted to make us think of the Ural Mountains - though I admit to confusion as I saw the name sometimes written as Bodmin and sometimes Bodmil, I did think it was in Cornwall at one point... 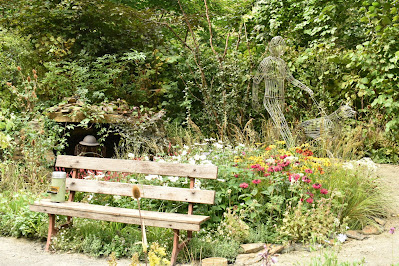 A charity close to my heart is  Guide Dogs for the Blind.  I have been sponsoring guide dos for a few years now so I knew I had to see out the Guide Dogs 90th Anniversary Garden designed by Adam Woolcott and Jonathan Smith.  It is is a thoughtful garden taking us on the journey of the how guide dogs first came to be used, the fear of sight loss and the independence that guide dogs help bring.  It is beautifully planted and constructed. 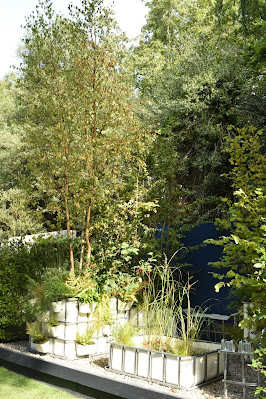 The RHS have added a few new categories to the show and Container Gardens is one of them.  I do like a good inventive re-using of materials and the IBC Pocket Forest Garden designed by Sara Edwards uses old Intermediate Bulk Containers, no I had never heard of them either but they are used to transport liquids/pastes/solutions in bulk.  So they are stackable and modular and lightweight when not filled. 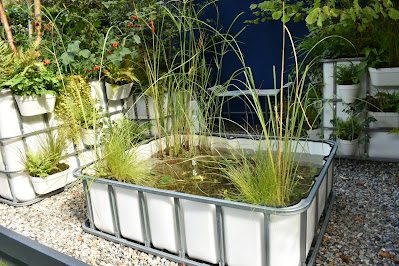 I particularly loved the pond, I think it looks good and would be so easy to make.  One of the things I love about Chelsea Flower Show is that amongst all the grand, all the glitter and all the expense there are simple ideas you can translate into your own garden.  Well, if you have an angle grinder and some IBCs of course. 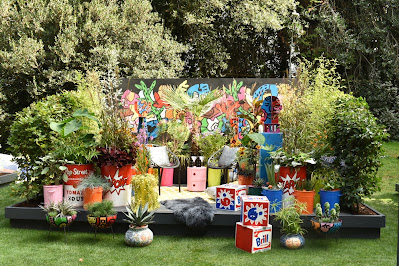 As this post is in danger of getting rather long I shall end on just one more garden for now: the Pop Street Garden which is one of the Container Gardens.  As I wandered into the show I bumped into a Garden Media Guild colleague who, after the general catch up, check how family and cats conversation was completed, said to me that this was one of the best gardens in the show.  Oh how right she was. 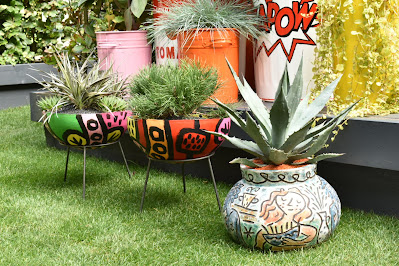 I loved it.  My Courtyard Garden is a container garden and it is such a good way of creating life and colour in difficult spaces or if you may have to move your whole garden for any reason.  This garden has plenty of life and colour.  It definitely ‘popped’!  It was designed by John McPherson of happygardens.site (and this garden is happy).  I did have planter envy for many of the planters and specifically this one with the woman depicted on it.
I shall write more of some of the other highlights in a future post.
Until then…….
Stay safe and be kind.
For more from the Blackberry Garden follow me on Twitter and Facebook
Best in Show RHS RHS Chelsea RHS Chelsea Flower Show showgardens