A return to Gardeners World Live 2021

It is so good that gardening shows are able to happen again and whilst they may not be happening in exactly the same way as they have done usually, they are happening.  Gardeners World Live was moved to take place in August this year and called 'Special Edition' and I decided that I was not going to miss it.

I have said previously that this show is the largest show that happens close to home and on the day I went I went to work in the morning (yes, went to work) and then called into Gardeners World Live on the way home.  This has two benefits: the traffic is off-peak and the show has passed peak-crowd.  I can park closer to the show itself as the car parks are also emptying.  Win win.  (that might be three benefits...)

The show was held almost completely outdoors except for the Floral Marquee.  It was smaller than usual but this seems to make the focus on the show gardens/borders and on plants.  Now whilst I always think that Gardeners World Live is about buying and unashamedly so, this focus made the show very enjoyable for me.  It meant I spent more time looking at the gardens than I may usually have done.  The garden above, the Woodland Fall Garden, was very popular as every time I went near it there were several people also enjoying it.  I really liked it too.  I liked the use of purple. It was a garden tied together with purple I thought: in the planting and the accessories.

This 'Beautiful Borders' garden designed by Kate Mason was rightly called 'Garden Envy'.   I stood and looked at it for ages.  As someone who has played for years at trying to get an Exotic Border right (to no great success) this is a masterclass showing what can be done in a small space.  The picture does not really give a sense of size, but this is not a huge space at all.  I also love the chair.  I keep looking at egg chairs and various similar chairs and I want one.  I want one but I know I would never sit in it so I sigh and save my money. 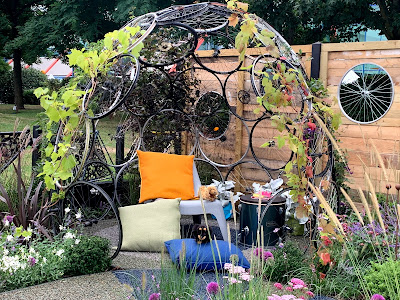 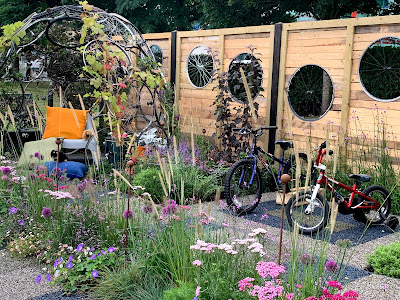 This is the 'On your bike' garden from Armstrong Landscapes Ltd and Secrets of the Garden.  As it said on the sign, "its all about recycling, upcycling and cycling'.  It was one of the many gardens to involve some form of transport and I loved the arbor made of bicycle wheels.  I would happily have one like this in my garden. 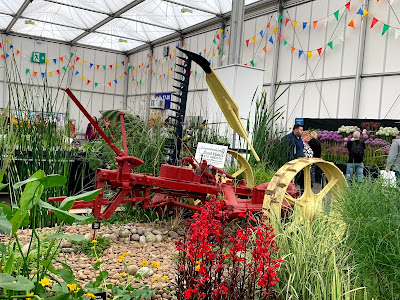 Lots of transport and machines, 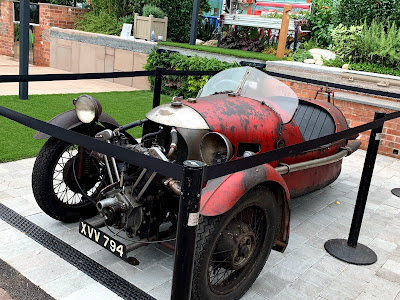 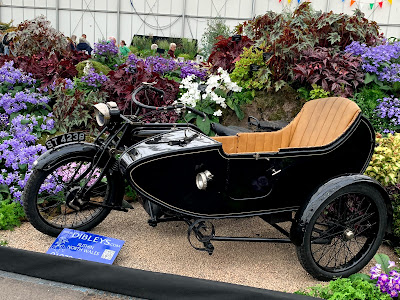 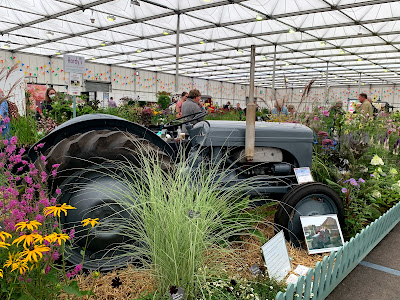 This is Ferguson tractor on the Hardys Cottage Plants display, it belonged to Rob hardy's father: Arthur and was restored by his son Peter in 2000.  Isn't it wonderful? 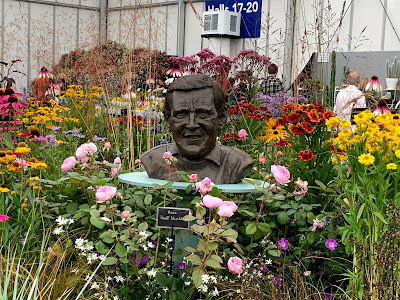 I didn't just look at machines when I went into the Floral Marquee, this is a rather wonderful bust of the late Geoff Hamilton who used to present Gardeners World and was the first Gardeners World presenter that I really watched as a regular part of my viewing week. 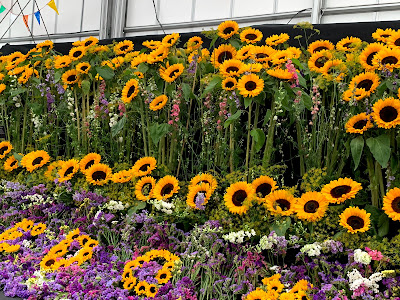 I did also look at plants. 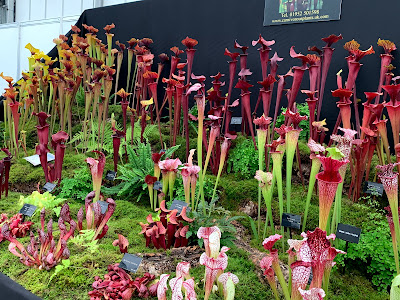 In a new twist for me, though I am always having to retract my previous opinions on plants I do not 'get', I spent quite a while starting at these sarracenias. 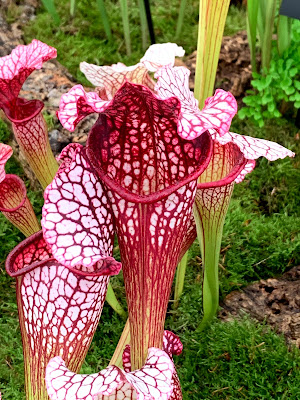 These carnivorous plants are beautiful and hungry.  I might have bought one just before going to the show, I wish I'd waited as they had some stunning ones on this stall. 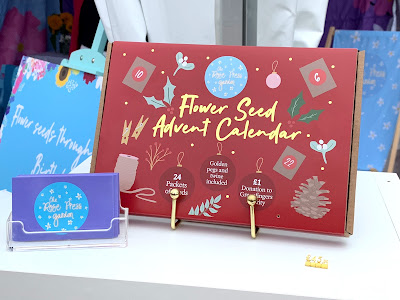 Whilst on my wanderings I found the Rose Press Garden stall and the owner, Lizzie.  Regular readers may recall that I reviewed their seed subscription service some months ago.  Lizzie has create an advent calender for the festive period.  It has 24 packets of seeds, 24 note cards with information and a special gold envelope for the 25th day.  Also £1 from every purchase is donated to Greenfingers charity. 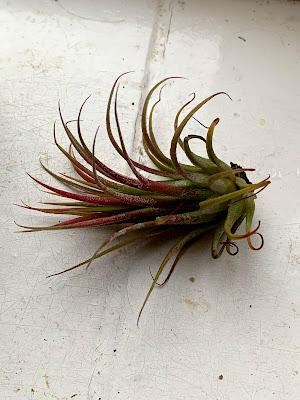 Did I buy a plant at the show?  why yes, I bought this tillandsia.  I bought one for my daughter from Tatton Flower Show.  Well of course I have fallen in love with it, it turns out that they do need more looking after than I realised and once I started having to care for it I fell in love with it.  T'was ever thus.  So if I am ever to give the one I bought for my daughter to her, I had to get my own. 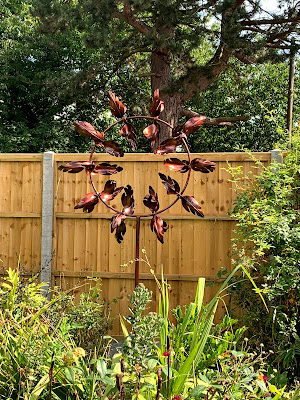 Anyone who has been to a garden show with me in recent years will know I spend more time than is reasonable standing in front of wind-spinners trying to decide which one to buy.  I look at the prices, I look them up online and decide to buy one when I get home and I never do. 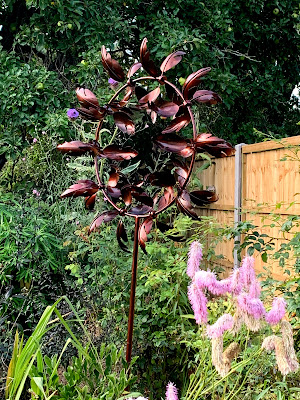 So this time I stood in front of this wind spinner and did not look at how much it might cost elsewhere, I plunged in and bought it.  Well actually I asked how bit the box was and how heavy as I would have to lug it back to my car.  I decided it was doable and then plunged in.  I am really really pleased with it, but as is the way of all things from the moment it was set up there has not been one breath of breeze.  Not one.  The washing hung limply on the washing line, the odd leaf waggled at me, but the garden is becalmed.
Sigh.
I had the most wonderful afternoon.  It was a pleasure to be outside enjoying the show.  I loved the focus on plants and that it was set out in a way that meant I did not feel too crowded or uncomfortable at any one time.  I do hope that things are more normal next year but I also hope that some of the changes are also kept.  It did feel like a 'special edition' which is a credit to the organisers and everyone who took part in making the show such a success.
Stay safe all and be kind.
For more from the Blackberry Garden follow me on Twitter and Facebook
BBC Gardeners World Garden Show Gardeners World Live NEC seed advent calendar The Rose Press Garden