The Snowdon Chronicles - the nearly weekend

and then it was the weekend when we should have been wandering up Snowdon.  The Covid restrictions meant that the organised walk was cancelled, but we could go to the cottage we had booked and we could go walking and the mountain itself would be there.  We decided we would go anyway. 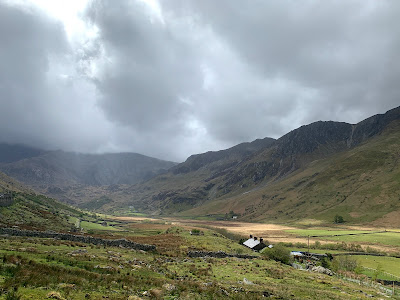 The weather was set foul for the weekend.  We had all our walking gear and were eager to test it out and rain itself was not going to put us off.  Day one of the weekend it was gale force winds on the mountain summit.  You can call us cowards, but neither of us had been up a mountain before and warnings of gales strong enough to blow us over was enough for us to think on day 1 we would wait for day 2.  I admit I was worried about being 'that person' who needed rescuing from the mountain when it was just not sensible to be making the attempt. 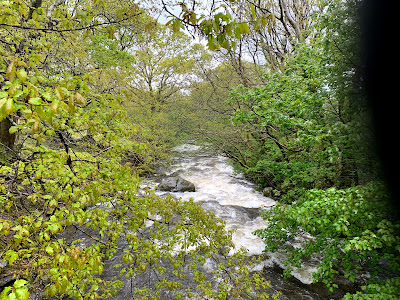 We went out walking nonetheless, exploring the locality where we were staying. 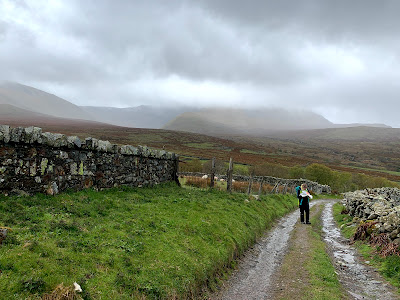 It was a bit hilly and we could see Snowdon close by.  We walked for a few hours and felt quite pleased with our efforts.  Tomorrow, we said, tomorrow we will tackle Yr Wyddfa. 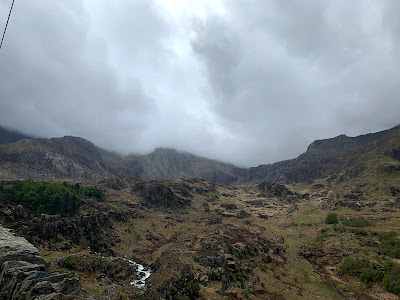 The weather was having none of it, the gales were not abaiting.  We decided it was not a great idea to head for the summit, but instead we would go for a walk that was at least the equivalent distance of reaching the summit and back. 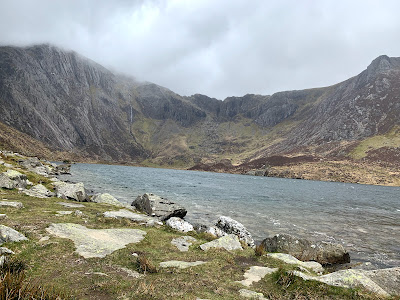 We set off for Llyn Idwal, a three hour or so walk from where we were staying.  We decided we would eat lunch at the lake then return to the cottage.  A good plan. 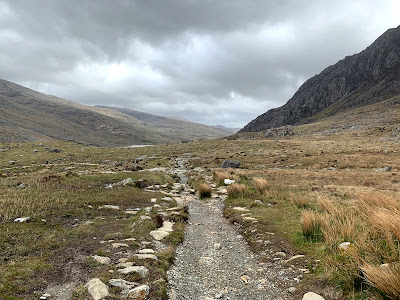 It was a good steady walk but the wind at times nearly pushed me over.  Whilst my ankle is now healed from its break I still feel a bit unsteady at times and I had brought a walking pole with me to help me walk.  It was a very wise move on my part as I would have struggled without it. 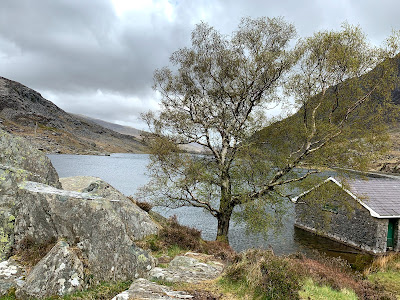 The weather was so dreadful at the lake, I mean truly dreadful we made our way back down to the lower lake, Llyn Ogwen where we sat in relative calm and finished our lunch. 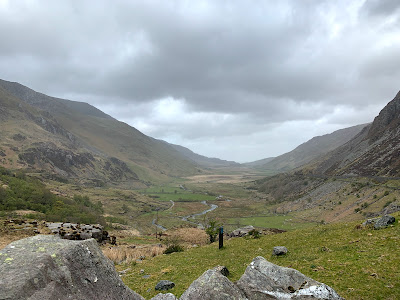 We headed back towards our cottage happy where we then discussed how our day had gone.  We had walked 11 miles which is more than we needed if we had gone to the summit and back, though we were not going to the same elevation.  Our walk had been a bit hilly but not mountainy.  We discussed how the weather had changed so often on our walk.  At times we were nearly blown over, at other times it was quite calm.  It was clear this was how the weather was differing at what altitude we were at and how it was funneling around the foothills.  We were happy we decided not to attempt Yr Wyddfa, if we had been more experienced maybe we would have, but we needed the confidence building before such an attempt.
We also noted that we are staying close to Snowdon in April next year, so we can do a practice walk before the organised fundraising walk in May 2022.  This feels like a plan.
I am going on this adventure to raise funds for Perennial, the horticultural charity.  If you would like to help me reach my target of £600 you can donate here on my JustGiving page.  (it still says the 2021 date but it is next year I am now going, it was just complicated getting the date changed!)
Stay safe and be kind.
For more from the Blackberry Garden follow me on Twitter and Facebook
fundraising Justgiving Mount Snowdon perennial Perennial Charity Yr Wyddfa