I have been doing a lot of walking recently, not sure if I have mentioned it much....  I have always walked but like a lot of people I have not labelled it as 'walking', its been more a thing that has happened whilst doing something else, often for miles.  A garden show visit will mean a lot of walking but it is not the priority aim of being there.  The last year though has prompted me to explore my locality more in a more determined fashion.  I now purposefully go out for walks that have no aim other than to walk. 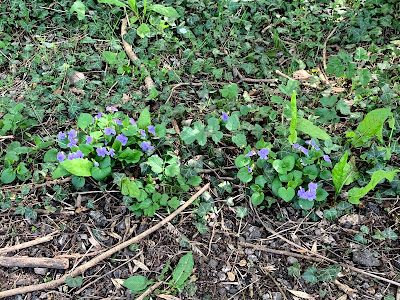 I have found many things on my walks, many paths I had no idea existed and explored new roads gazed at front gardens (one of my favourite hobbies).   I found these wild violets on a recent walk which has become a key route for me as it takes me into the green soonest from where I live.  I can wander along around the back of the houses and parallel to the ring road and motorway junction and yet I am in woods and there are violets.  These violets are a happy find, but I realised the other day there was a very special find.
I was having a bit of day of it.  You know the sort of day, things not going to plan and more stress being caused by other people than I was really in the mood to deal with.  I say 'being caused by other people' but in reality I mean I let them stress me which meant I needed to press pause.  A gap suddenly appeared in my day and I thought 'sod it' or maybe an even ruder word than that and decided to go for a walk.
I set off with nowhere in particular in mind.  I needed to walk, that was the priority.  The first decision is which way will I turn out of the drive and today I turned left. A quick walk around the block I thought, that will do it, just 15 minutes or so to clear your head.  Yet as I walked a thought started peculating in my head.  A couple of weeks ago I had taken a new route that I had not tried before.  There is a large green space just the other side of the main route into the city from where I live and I have been wandering around it for some time now; but this was a new way in I had not tried before.  I had walked down towards the dual carriageway, through the underpass, along the road and then over the wooden walkway and 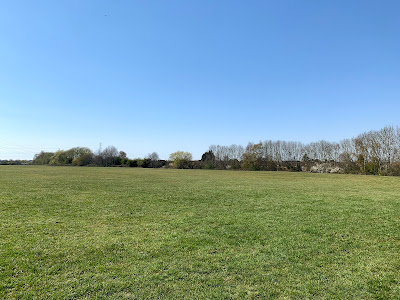 pow! I was suddenly in this large green open space.  The first time I entered this field I just stopped.  I was overwhelmed by the amount of green and the sudden feeling that time had stopped.   You can cut across the field to join the main path but I did not want to shorten this journey, I wanted to walk around the field and enjoy every paused moment.  It is not a sight of special scientific interest, it has no rare orchids or helleborus viridis, it is just a large mown grassy field perfect for playing football on, or maybe cricket.
As my walk continued on my stressy day I knew with that immediate clarity that I needed to find my green pause.  I needed to get to this field.  Maybe it is that part of me that is so claustrophic, that cannot abide feeling closed in, that when I get to this space my soul expands to fill it.
I could have walked across the field to get to the main path quickly.  But this was not the aim of the walk.  I was already way past my 'fifteen minutes or so' intention and was now in that head space called 'couldn't give a monkey's' and just wanted to keep walking.  I walked around the field and breathed.
Then I turned to join the path and walk through the rest of this space which is part playing fields, tree lined walks and part flood-meadow (or bog as it has been known as in the past).  I was soon back on the road and turning towards home.  My fifteen minute walk had become an hour, but now I was released from the knot I had tied myself in, now I felt able to return to what I needed to be doing.  I had to make up the time later but it was worthwhile and now I know next time I feel like that I shall head for my green pause button.  I shall walk, pause and breathe.
Stay safe all and be kind.
For more from the Blackberry Garden follow me on Twitter and Facebook
green space Leicestershire lockdownlife Mindfulness self-care walking