The rose garden in my imagination

There is a list, there are many lists: lists of places to visit and lists of plants to grow.  Then there are lists within the lists including the rose list.  I love roses and grow quite a few.  On Twitter pretty much every day I speak with @rosesuk who posts a picture of a rose and I inevitably add it to the list.  Which then usually sets me thinking... 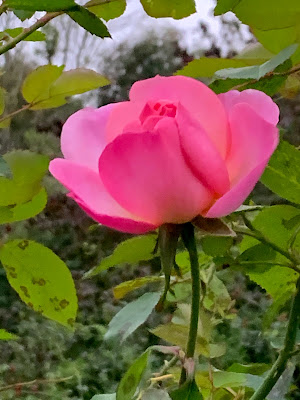 Currently there is Plan A that sites the rose garden in place of the Knot Garden.  This idea 'has legs' as they say. Even as I write this I am thinking it is a likely idea and one just waiting for its moment.  Its moment I am sure will be hastened by two words - box blight.  I have not got blight yet, but the emphasis is on yet.

Plan B is, well, more nebulous.  It does not have a physical space in my mind, nor does it have such a strong form as Plan A.  It would be in the back garden but I look at the garden and it does not tell me where it might sit.  I think I could redo an existing border.  Maybe do a 'Reverse Dixter': dig up the Exotic Border to plant a rose garden.  Currently the Exotic Border has no roses at all in it so it would be a complete change.  I think about this but it is not appealing enough at the moment.

I look around the garden and think where-else could it be?  I could re-purpose some of the Wild Garden, this would be an easy thing to do to create a new border but the shape is not forming in my mind.  I know it might sound odd but the contours of the garden tell me where things should be and what they should look like.  I feel at the moment the garden is shaking its head and saying 'not here sweetie'.

So it is a 'watch this space' moment.  Or watch that space, or find a space tell me where it is and then watch it.  and keep singing the song - you know the song - it begins 'I beg your pardon....'