I am not sure how we have got to March already, never mind having reached the end of it!  We are a quarter way through the year already and not much to show for it; well that is how it feels anyway until I wander into the garden and can see that things are happening. 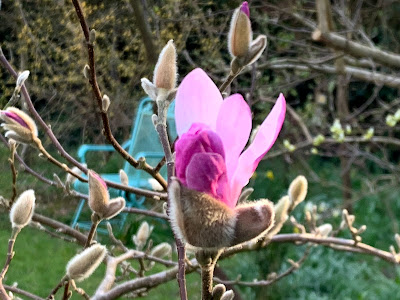 The Magnolia Leonard Messel is starting to flower and that alone is enough to make me grin broadly. 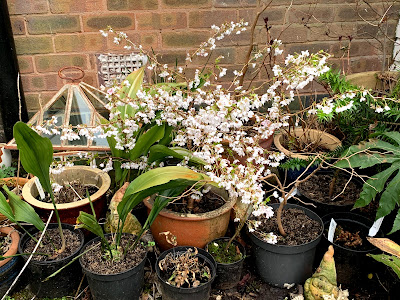 Another smiling moment is the Prunus Kojo No Mai in the Courtyard Garden.  This was a gift from a friend a few years ago and I am always pleased to see I have not killed it over the Winter.  I have killed a couple of these shrubs, but growing it in the Courtyard Garden seems to suit it.  I am tempted to plant it out now into the garden...... but what if it then dies?  Decisions, decisions. 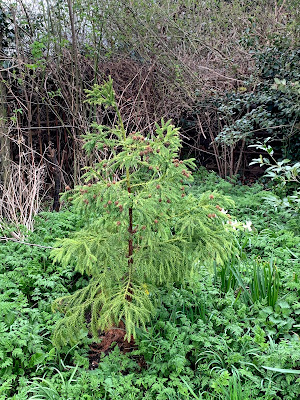 What I have planted out into the garden after six years in the Courtyard Garden is the variegated Crytomeria sekkan sugi.  This tree has now been released from its pot and planted into the ground.  It was looking like it was suffering a little.  It had got a bit dry and was in need of potting on.  I am going to have to keep an eye on it as it can get rather tall.  I will see how it goes/grows..... 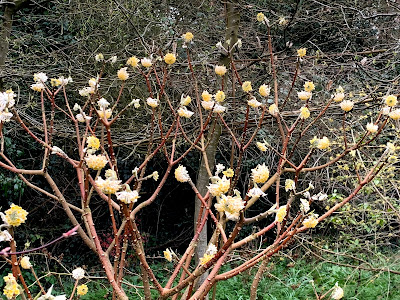 The Edgeworthia is covered in flowers this year.  This Winter has felt colder and frostier than recent years so I worried out it even more than usual.  It is now a goodly sized established shrub and my worries were unfounded, it has sailed through another Winter safely. 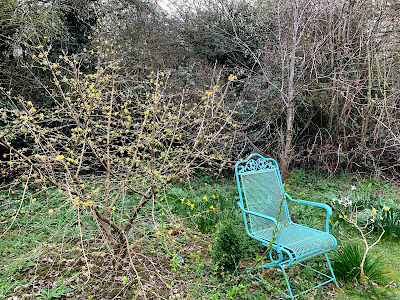 The Cornus mas has been flowering for weeks and is a wonderful froth of yellow.  This is such a good shrub, I grow it because people kept saying what a wonderful shrub it is.  They are right.  It is getting to be quite large now and I pruned it in the Autumn to reduce some of the height a bit and give it a bit more shape.  It has responded well to this. 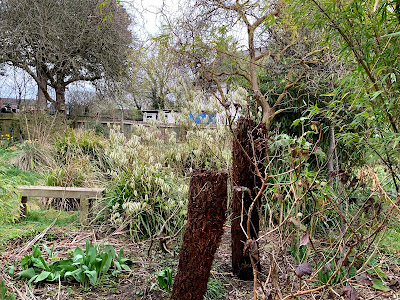 The tree ferns have been unwrapped and I have given them their first feed of the year.  They are both showing signs of life so I am very hopeful for fronds.  I recently joined a Facebook tree fern group which I am currently lurking in, it is full of very useful advice and seeing the stages that other tree ferns are in in the UK is very reassuring.  As the tree ferns are now causing me more angst than the Edgeworthia, anything reassuring is good!  Even as I write we are forecast frosts early next week which means they will don their pirate headgear again until the frosts have passed. 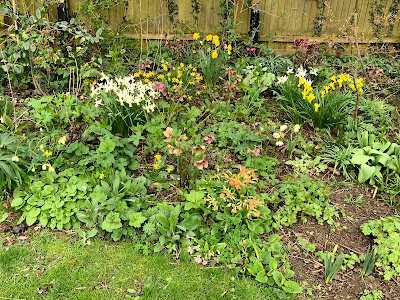 The Spring Border is reaching peak-Springy.  I love this border this time of year.  I like that it peaks in one period of time and then rescinds into the background for the rest of the year.  Not every part of my garden has to be interesting all year round, they take their turn.  I like this, it feels a realistic expectation. 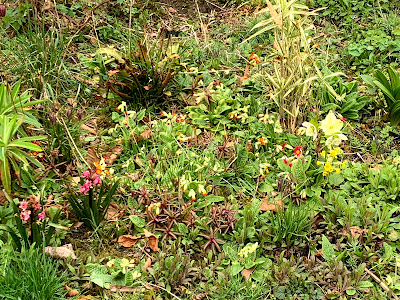 The Woodland Border/Bog Garden which is neither woodlandy or boggy is also looking good this time of year.  It does well for primulas and also the Fritilleria meleagris do well in this border. 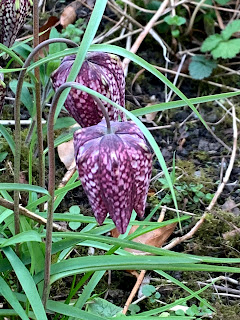 I love these Fritilleria meleagris very much.  They are opening well and I jested a little when I said this border is not very boggy, it is a bit boggy and it suits these plants very well.  They are actually starting to clump up a bit now which is very exciting. 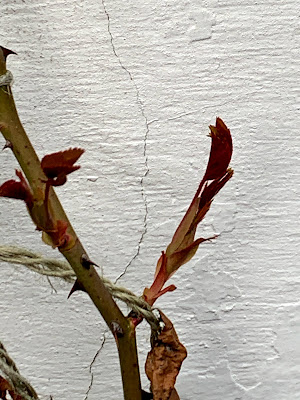 I have finished pruning all the roses and they are now starting to grow well.  I love seeing the new growth. 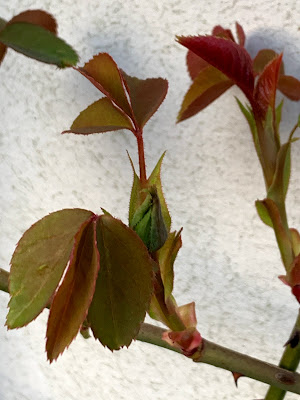 and look, buds are forming, that is hugely exciting! 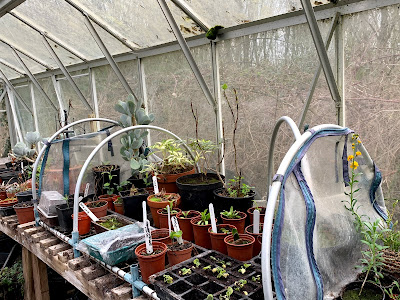 There are some plug plants rooting on and some tentative seed sowing taking place in the greenhouse.  It still feels a bit early whilst also a nagging fear that time is moving on.  We are still having a few random cold nights so waiting a week or so before sowing a lot of seeds seems sensible. 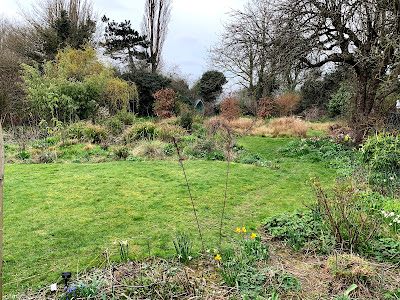 and I have given the lawn its first mow of the year.  Just a bit off the top to settle its rufty-tuftyness. 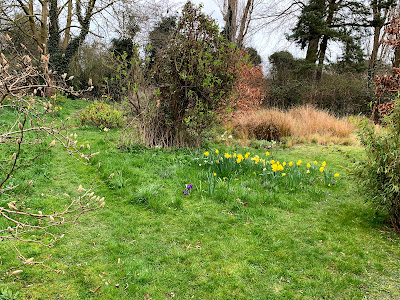 I mow around the Dancing Lawn and paths through the Wild Garden. 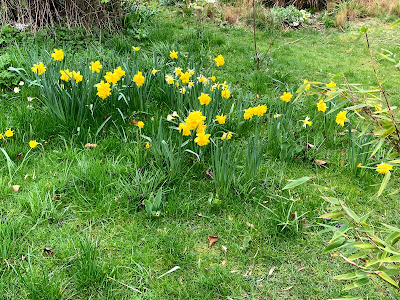 The Dancing Lawn is currently be-daffed.  When the flowers are done I leave it a few weeks to let the foliage die down. 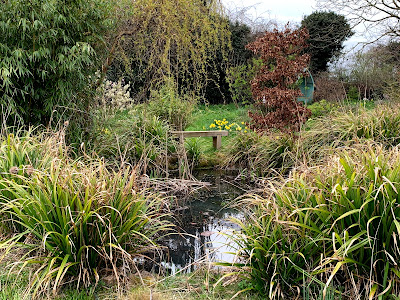 and I end with a different view of the pond from usual, this is the view from the other side.  I opened up this view a year or so ago by removing a couple of rose bushes (don't worry I have more than replaced them in other parts of the garden).  I like that I can see the pond from more than one angle now, whilst at the same time deliberately not wanting the pond to be visible from all angles.  I like some discovery in the garden.  The Carex Pendula gives a nice edging but self-seeds like a demon.  I half like it and hate it in equal measure.  The Pond itself is quite full and now has frogspawn and newts in it.  Lots of newts this year, I worry for the frogspawn.
Thanks as ever to Helen for this meme.
Stay safe and be kind all.
For more from the Blackberry Garden follow me on Twitter and Facebook
Cornus mas Edgeworthia chrysantha End of month review End of month view