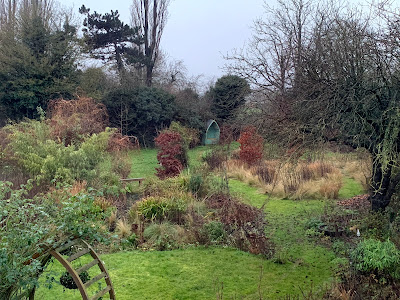 The amount of rain there has been has now reached the point where the pond overflows a little around the edges and puddles have appeared in the borders and lawns.  This is a rare occurrence in the garden, but it is not unknown.  I have said previously that my soil is generally thick clay so some puddling is not impossible.  The garden is also slightly on a slope, actually calling it a slope is exaggerating, there is a slight incline.  It is not very noticeable, it is only whilst out walking that I realise I walk uphill to get home.  I do not reach the top and starts singing as if I was Julie Andrews, Leicester is not known for its similarity to the German Alps; but there is enough of an incline to mean that water runs away from the garden.
As I wander out on to the road there is currently a small stream that runs down the road seeking to join the brook that emerges a couple of minutes down from the house.  There is a ditch to one side of the lane where people like to leave litter and flytip.  Sometimes it is a large amount that has been flytipped, but often it is a bag of rubbish here, some rubble there.  Small yet destructive amounts that damage the environment and make life harder for the urban wildlife.  At the moment the ditch is collecting and channeling the excess rain water, this is good, but the ditch is blocked at one point and suddenly the water comes up and over onto the concrete of the lane.  It runs steadily, thinly, but persistently.  I look at it and at the strength of the water.  It has already made a channel where it slips from the road and into the playing fields below.  A few years ago, down stream from me, the brook has flooded houses.  Work has been done to prevent this, but the risk must always remain to some extent.
I stand by the window and look out across the rain soaked garden whilst seagulls fly overhead to land on the nearby school playing fields.  Seagulls, I think, then I think, gulls, they are just gulls as we are about as far from the sea as it is possible to get.  I was speaking to a friend the other day, (zoom - of course, is there any other way to speak to people these days?) and we were of course talking about the pandemic.  How I long for when this is not the main topic of conversation, when it has sidled off into being a memory rather than front of mind all the time; I digress...  We were talking about the resumption of travel and how much we just wanted to go somewhere, anywhere and I said how much I wanted to go to see the sea.  Now I know the massive concerns there were last year when people flocked to the coasts and I am not in any hurry to put my health or anyone else's at risk by going anywhere.  At this moment in time of course it is not possible to travel anyway to somewhere that is not local unless there is a good reason, I get that.  But when I pause and see the gulls wintering close by I want to travel back with them to the sea when they go.  Which sea I then begin to think.  Which bit of sea would I jump into the car and drive to at this minute if I could?  Would it be the closest seaside town which I think is probably Skegness.  I have a confession I have never visited 'Skeggy'  as far as I remember (I always allow for my parents may have taken me there but I just don't remember it) though I have been to Mablethorpe which is its close neighbour.  As I think this I know there is at least one garden on my list of 'want to visit' that is just outside Skegness, a combined garden and seaside visit cannot be a bad thing.  Suddenly Skeggy is on the list too.   Today however, today in this moment of cold drizzly rain that dampens everything including my mood, where I want to visit most of all at the moment is further up that coast.  I have not been to Whitby in over a decade yet it is a place I love.  I want to wander that North Yorks coastline: to visit Scarborough and Robin Hoods Bay and eat chips.  I want to sit on the sea front and eat chips and drink tea.  I'll even happily sit in my car eating chips and drinking tea if I can see the sea whilst I do it.
For now I stand by the window and look out at the rain soaked garden.
Stay safe all and be kind.
gardening lockdown life lockdown thoughts my garden rainy days seaside winter