There is a moment when I look out at the garden and think  'we have reached peak Autumn'.  Sometimes I think this and then think it again a day or so later, but usually around and about mid-November there is this moment in time when the garden and I exhale in the joy of it. 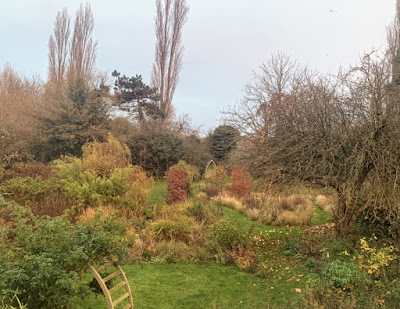 The Autumn garden is never the same two year's running and increasingly key to the declaration of 'peak Autumn' is how distinct the beech pillars are looking.  I planted them many years ago as mere twigs and over time they have become what I hoped they would become - pillarish.  Originally I planted five but two died and refused to be replaced.  With my usual 'rule of three' after a couple of times of trying to replace them I gave up.  When your garden is telling you that this plant is not going to grow here then it is wise to listen.  It also saves a lot of money on buying plants doomed to fail.
I could pause for a moment and wonder why two failed when three have succeeded well.  I can only assume there is something specific in the soil conditions on the spots where I tried to grow them, one of the spots is where I have other plants nearby suffer from wind-burn, so I wonder if it a small micro-climate all of its own?
Anyhoo, back to the surviving pillars: I prune them a couple of times in the year to try and keep their shape and not let their height get out of hand.  They look good all year around but it is in the Autumn and Winter months that they take hold of the mantle of 'key feature of the garden'.  Before I started to write this piece I had not formulated that view, but as I started the sentence to sum up how important they are to the garden, these are the words that appeared as I typed and that means they must be the right ones. 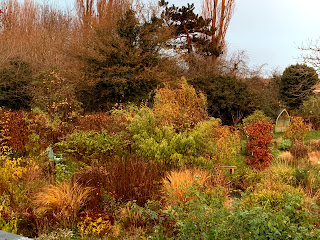 It only takes a small change in the light and the colours in the garden shift into a different gear.  These two photographs were taken about five minutes apart.  Colour seems so very important at the moment, the greyness of the short daylight hours makes me feel like colour is draining away generally and specifically.  A glance out of the window and I see that this is not so.  There is still plenty of colour in the garden and particularly it is good for me to look from the upstairs windows of the house and take the longer view.  I think I focus on the close-up individual plants in the growing season.  Autumn feels like when I take a step back (up) and consider the bigger picture.  I pause to look beyond the singular, beyond the individual and think about how the garden is bigger than the sum of its parts.  If the garden was only individual plants, each planted in isolation with no relationship or connection to its neighbours then would it be a garden anymore?  Would it not just be a collection?  A catalogue?  A list in physical form?
Except I hear this said time and again that if you buy plants with no plan, if you want the plants for their individual beauties and have not considered how they will relate with the garden itself then you are doing just that - you are creating a collection of plants and not a garden.  This always makes me think  as I know I often buy plants without a clear idea where they will go.  I don't do this all the time, but whims happen and I buy a plant as 'I have to have it' and I know I will worry where it will go later.  So with all my worries about individualism (and they go much deeper than just gardening), I wonder if this is what my garden looks like to others?
I then take a step back, a step up, look out of the upstairs window and think no, it is ok, it does stitch together.  I can see a rhythm through the planting and I can see that there is thought behind it. Now ask me if I had a definite plan that I stuck to and I will sheepishly look away.  Yet as often said the garden told me what it wanted to be.  The contours of the land shaped where the pond would be, the shapes curved and became almost without me taking any part in the decision.
and these plants I buy as a whim, you ask, do they fit in?  Well yes I think they do.  The space where they should be will speak to me and the planting happens.  It can take me a while, some plants may wait weeks, months, ok I admit it, years; but it happens and they go in the right place eventually.
The conclusion I reach, after all this pondering, all brought on from a glance out of the window is that a plan does matter.  Having a plan is a good thing; but what matters more is being open to the plan changing or the plan not forming until the constituents of a possible plan are in front of you.  The garden is not linear, it does not have to conform to notions of what is right is wrong.  The garden, if it teaches me nothing else, teaches me that it will do what it wants, it will pretend I have a say in some matters but only if they are things it is happy for me to be deluded into thinking I have a say about, and the seasons will turn whatever.
and this week, this one moment one day in this one week, I think Autumn peaked.....
unless it does so next week...
Stay safe all and be kind.
autumn autumn color autumn colour fall color garden concepts garden design garden planning long read