One of the best moments when I return from holiday is the moment when I get to reaquaint myself with you.  After I have had the moment of counting the cats and had a cup of tea then I am out in the garden.  I see what has changed and what has stayed the same.  It is an exciting moment and a moment of joy and makes all the missing you, whilst I have been away, worth while. 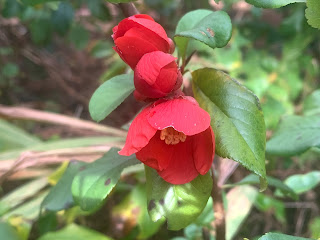 Reconnecting with you, albeit briefly, the other day gave me exactly the same experience with bells on.  As previously mentioned I recently broke my ankle.  Thankfully a stable break so it could have been a lot worse.  The first week was pretty awful if I am being honest.  The pain was constant and I was really struggling with the crutches.  Every new day is a little better than the day before and my mobility is now much improved.   I am still getting very tired very quickly so the sofa is still where I am spending most of my time but the other day I ventured outside to visit you, my garden, for the first time in nearly two weeks. 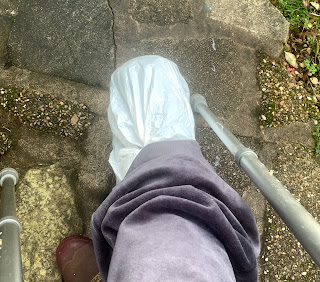 Fetching footwear was deployed and whilst I can walk short distances with only one crutch, I decided extra care was needed especially as it is a bit slippy out there at the moment. 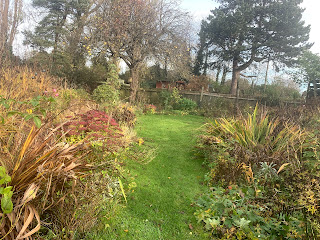 Oh what a relief it was to see you again.  I started this letter talking about holidays, but holidays are something that happens by choice and it was not my choice to be away from you.  Yes I could see you through the window, but even that was a challenge.  The Conservatory has a step down to get into it and until my mobility improved it was difficult for me to get easily into the conservatory.  Well, actually, I could step down ok but stepping up and out again was just so hard.  My morning routine of looking out at the garden from the spare bedroom window was even a detour too far to begin with. 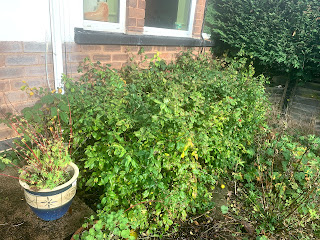 I was delighted to see the Quince Hedge looking so hedgy.  It needs a bit of a trim but it is having a bit of a flowering moment which is always a good thing. 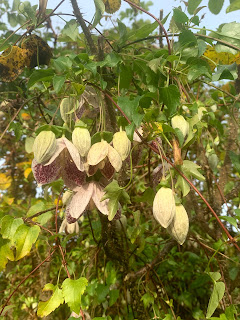 The Clematis cirrhosa which is growing up the remains of the eating apple tree has started to flower.  This plant is a must for late/early pollinators.  It is very much one of my 'must-grow' plants. 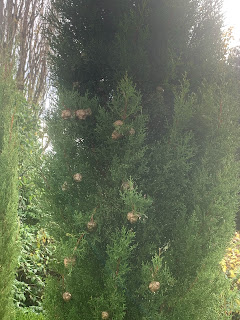 I was delighted to see that the cypress trees in the front garden have got to the stage where they have developed cones.  I say cones but they do not look like the more traditional pine cone that I would have usually thought of.  I also confess, dear garden, I had to resist the urge to rush and buy some gold spray paint and paint them to look like baubles.  I know, I know, you  are horrified at the very thought and so am I....... sort of....... I also really quite like the idea too (I never said I had any taste). 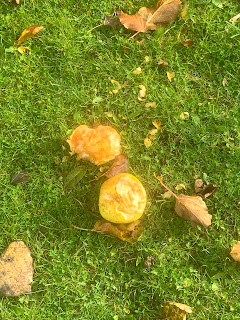 I wandered through the fallen apples from the Bramley tree.   I tend to sweep the bruised/pecked ones into a pile as a weekly task so that the birds and wildlife can continue to enjoy them.  I will not be able to sweep them up for a while and this feels like not the worst thing that could happen.  As long as the birds and foxes can still enjoy them that is what really matters.
What also matters was that on my wander around I managed to top up the bird feeders, I was worrying that they had were empty and that the birds would not understand why they were not being refilled.  This might not sound like the biggest achievement ever but for me it was a positive moment. 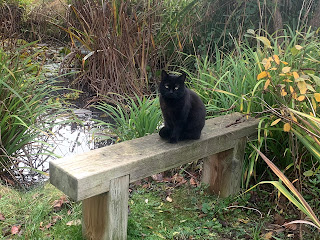 Trev kept me company on my wander.  I liked to think that if I fell he would have sprung into Lassie mode and gone and fetched help.  I also kept my mobile on my just in case.....
Dear, dear garden you are going to have look after yourself for a few weeks.  I will be keeping an eye on you of course, but my ability to do much is limited.  I would worry a bit about the amount of jobs that will be piling up but there is nothing I can do about that; que cera as Doris would say (sing).  In the meantime I am making lists of seeds I want to buy and planning things for next year.  Be afraid.......
Take care, stay safe and be kind
Your loving gardener
letter to the garden letter writing lockdown life lockdown2