It was way back in January of this year when Monty Don presented his series American Gardens on the BBC.  I had to look up when this was as I have lost all concept of time this year and it feels like it was on in another lifetime.  I remember watching the series and enjoying it hugely.  It was a series on a grand scale which was just what was needed in those grey January days.  I was therefore delighted when I was asked if I would like a copy of this new book which expands on the television series.  I said yes straight away and whilst I have not paid for this book, my words and opinions are as ever my own. 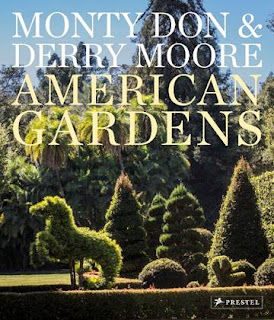 This is a hefty book and the weight of it alone makes you know that you bought something special.  The book is split into three journies along the same lines as the episodes from the series.  This is, however, as alluded to above, more than 'just' a book of the series.  This book stands alone so you do not have to have seen the series and dare I suggest, that if you had the book first and then watched the series you may (as is often the case I find when I read a book before a series/film) think that the book is better.  Key to this book though is that it is a joint venture between Monty Don and Derry Moore.  Monty explains in the introduction that whilst they often journeyed together they also travelled apart.  They did not always go to the same place at the same time and some gardens Derry visited Monty could not fit into his schedule.
Monty's quest was to find 'the' American Garden and this book charts this quest.  I will skip to the end and probably not surprise you that he found there is no such thing as 'the' American Garden, there is a plurality of gardens that embrace all the different cultures and landscapes and climates that the country of the USA is composed of. 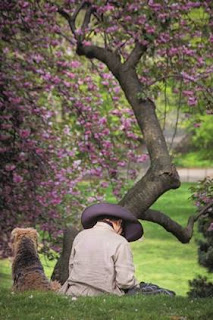 I always enjoy Monty's writing, which I find lyrical in quality.  I know I have said previously about his books that his voice is strong through his writing and I can always 'hear' him when reading.  The photographs by Derry Moore are just outstanding.  They lead you along Monty's narrative and interweave with a narrative of their own.  As I had watched the series some of the gardens featured felt like happy memories:  I remember how much I enjoyed the section on Bunny Mellon's garden so to be able to read more in depth about it was a joy.  Reading more about the excesses of James Deering's garden Vizcaya similarly reminded me of how interesting this garden is yet, also how shortlived it was in its heyday.  Whilst these created and constructed gardens are astonishing in their vision and creation, it is the more naturalistic landscapes where my heart really begins to sing in this book.  Deserts are such an alien landscape to me, sitting here in the middle of middle England.  To visit a desert landscape such as the Desert Botanical Garden in Arizona would be a dream come true.  It is so different to anything I have ever experienced and probably never will.  I look at the couple of cactii I have and whisper apologies that they will never be in such an awe-inspiring landscape.  What also made me very happy was that one of my all time favourite buildings, Fallingwater, designed to complement its natural surroundings  by Frank Lloyd Wright, is featured in the book.  Again I can only dream of ever seeing it in reality.  Such is the joy of this book, it takes you to these places, maybe only with a glimpse yet it is glimpse enough.
I was disappointed that there was not more Native American/indigenous content in the book.  The book feels that it is largely a tale of wealth and privilege and the creation of masterpieces.  I thought when I watched the programme I needed a series 2 this time focussing more on the more ordinary people and their gardens/outdoor spaces.  As said above Monty acknowledges that there is not a singular 'American Garden' and it would be fascinating to have further exploration.  I shall hope for a volume 2 of this book....

This book is a great achievement.  If you are struggling to find a gift for someone for that large festival that happens near the end of December and begins with C then I think this would delight them.  It is one of those perfect gifts as you might not buy it for yourself but you would be over the moon if someone bought it for you.