I visit North Wales frequently and Snowdon sits as the backdrop to these visits. We have discussed walking up Snowdon one day, we talk often about taking the Llanberis railway to go to the top and back, and yet none of this has happened yet. This is now going to change for I have committed to walk up Snowdon in May 2021. I am doing this to raise money for Perennial and I have a JustGiving funding page where people can donate (please donate - I'm currently at 20% of my total so I have a long way to go in every sense). 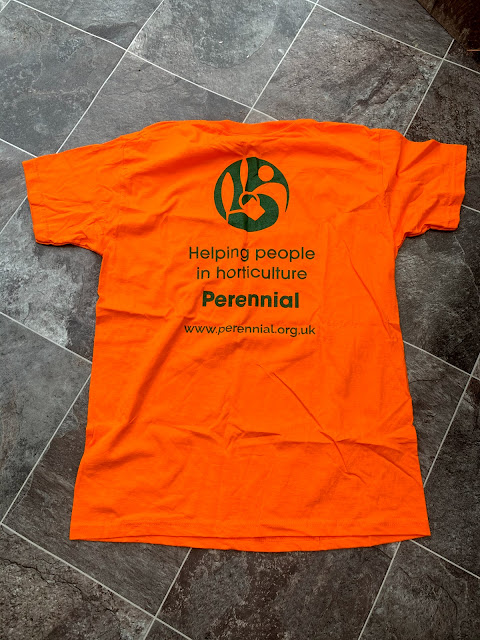 I am going on an organised trip and we are using the Llanberis path.  This is apparently 'relatively' easy and it is a long path to ascend the mountain; it is going to take several hours to get up and down again.  Oh, did I mention, this is all taking place at night too?  I have bought a head torch....  This walk is going to be a challenge for me and whilst it is 'relatively' easy it will be at least five hours to get to the summit and then several hours to get back down again.  Did I mention this is at night? Whilst it is several months until next May it seems sensible to get the kit I need together now and get training.  Not just walking, but uphill walking is required. 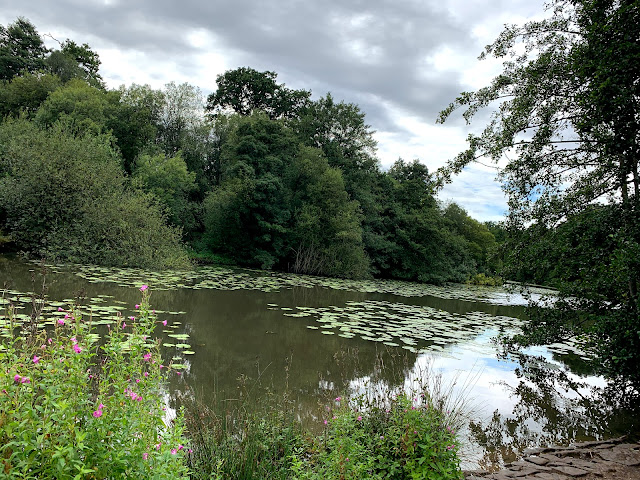 I started however on the relative flat, an afternoon of walking at Calke Abbey. I have visited Calke since it was opened by the National Trust yet I have not walked a lot in the wider park, I generally spend time in the gardens. So on this visit my daughter and myself set out away from the house and into the park. 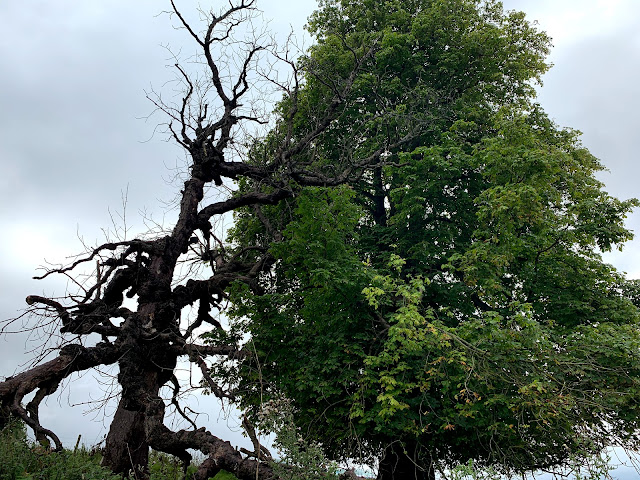 As we had driven to Calke there had been a torrential downpour, thankfully whilst the trees were still dripping, the rain held off for most of the time. We did the 'Ancient Tree' walk as it was getting on in the afternoon when we got there and would have needed more time to do any of the longer walks. Also it was my first venture out in my new walking boots. I need decent boots for Snowdon and I need to know they are comfortable before the ascent. 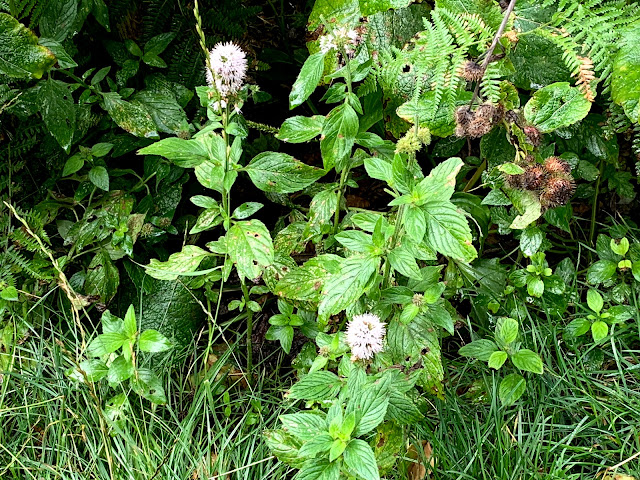 We found many things on our walk, I think this is a mint just growing wild near one of the ponds. 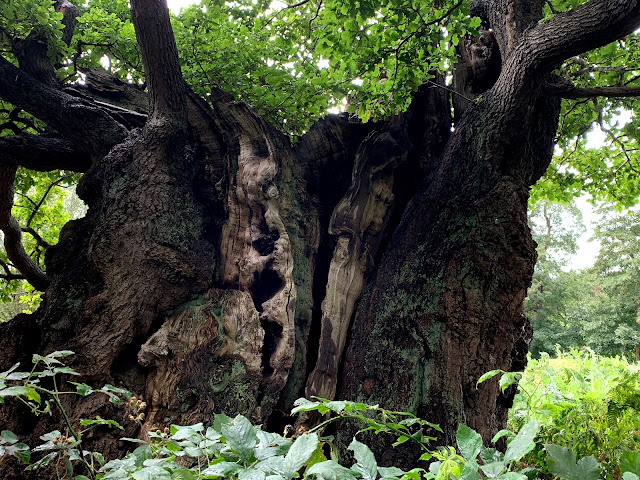 This is an ancient oak, reputedly 1000 years old.  This led to a discussion about the Major Oak as Nottingham is where I am from and where my daughter lives.  We decided we were totally ashamed that we have never been to see the Major Oak, a tree that my mother used to play in when a child (it was allowed then) and is a crucial part of the Robin Hood/Nottingham mythology.  You can expect a walk to visit this at some point. 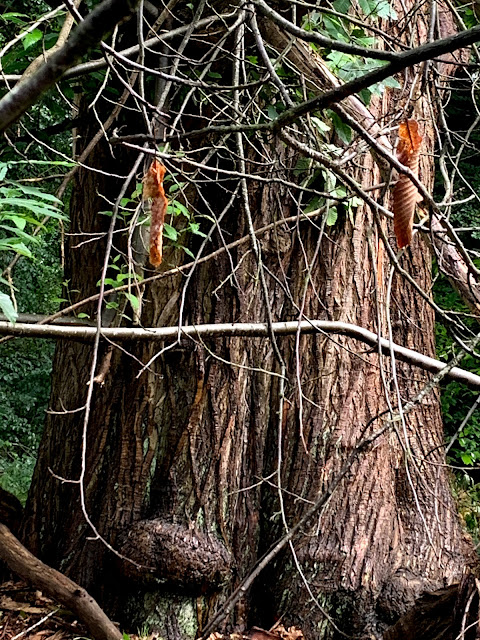 We found the sweet chestnut trees that were described as having 'latticed' bark,  which we thought was a good description. 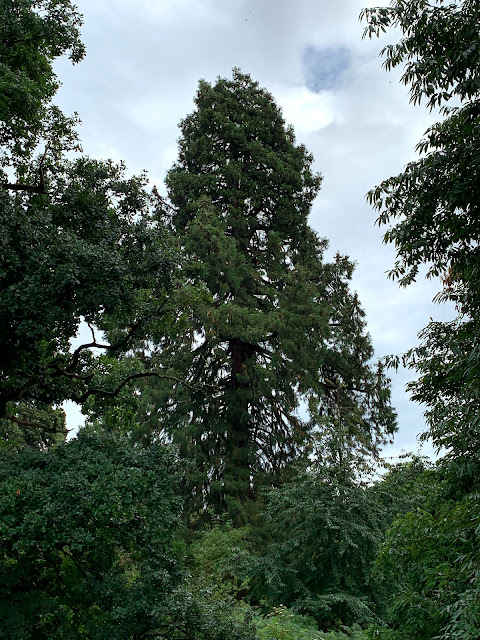 and we waved hello to this Sequoia which was standing out so tall.  We did decide it was still a baby really. 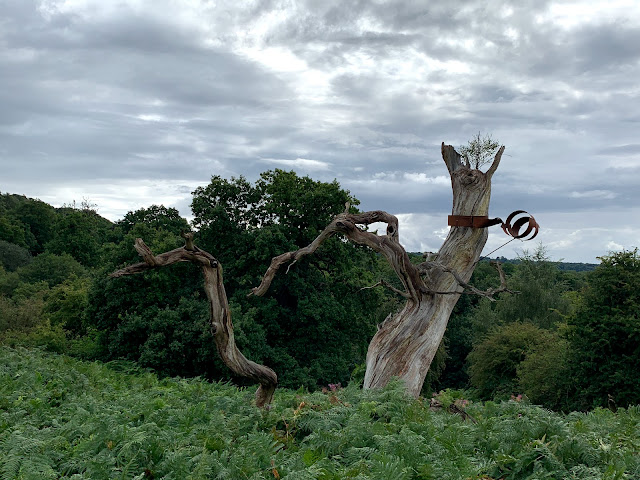 and we decided that this was an art piece that was working very well particularly against the dramatic sky. 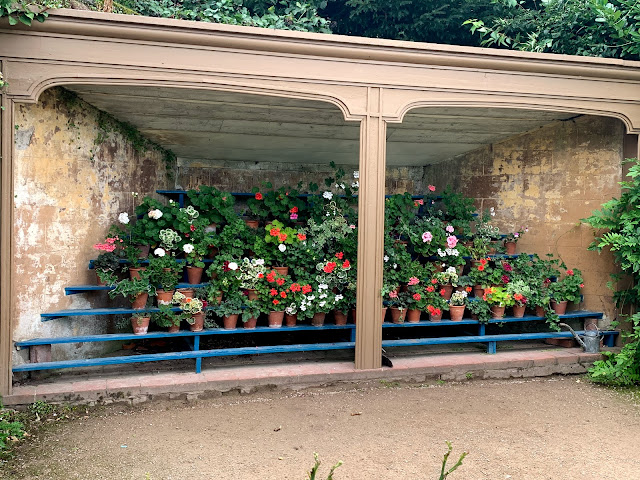 It is against the law to visit Calke Abbey and not say hello to the Auricula Theatre.  This is the first place I ever heard of such a thing and still the best example of one I have ever seen.  It did not look like this the first time I saw it, many years ago now, before it was restored. 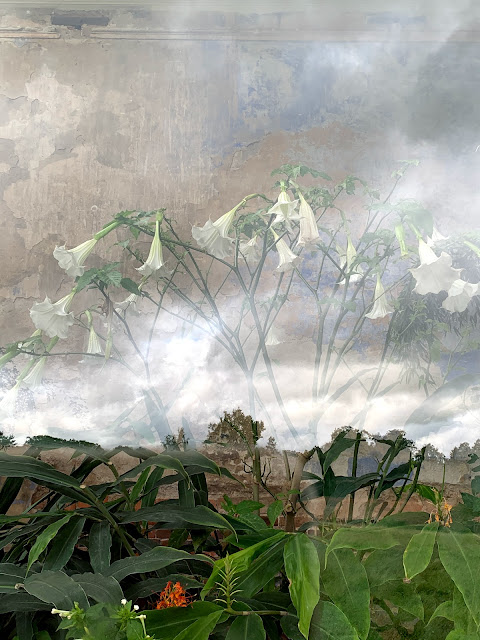 Similarly we always say hello to the Orangery, now restored but a half-collapsed wreck when we first started visiting.  We were not allowed to enter this visit so this is not a great photo, except I rather liked the ghostly affect. 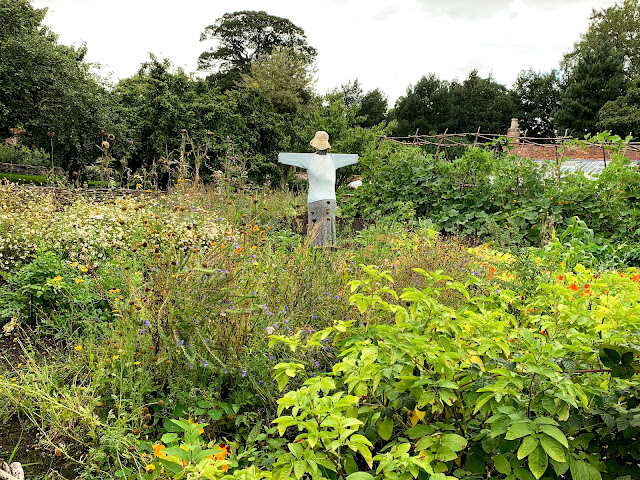 The vegetable area of the Walled Garden is always a delight. 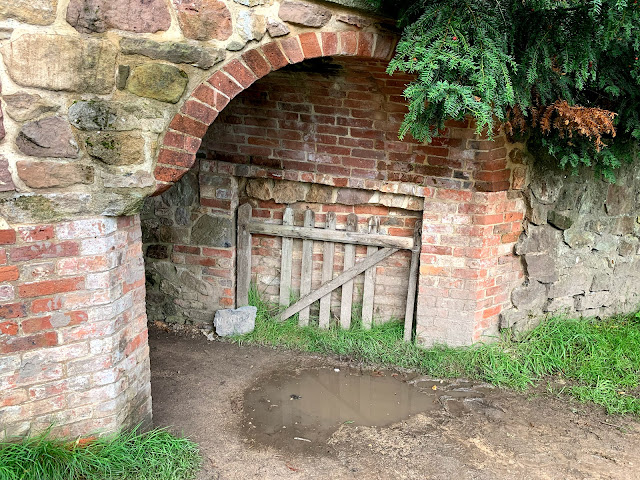 and we went and said hello to the tunnels that used to take the gardeners from one part of the estate to another without being seen by the people in the big house.  My favourite detail of the tunnels is the recess for the gate.  It is such a great attention to detail. 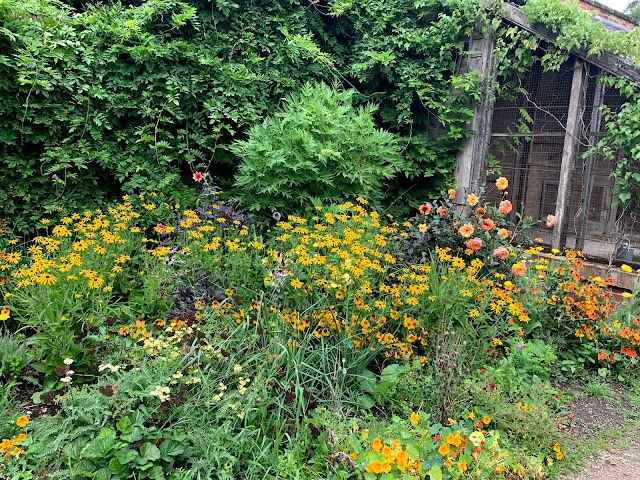 The ornamental part of the Walled Garden was very colourful. 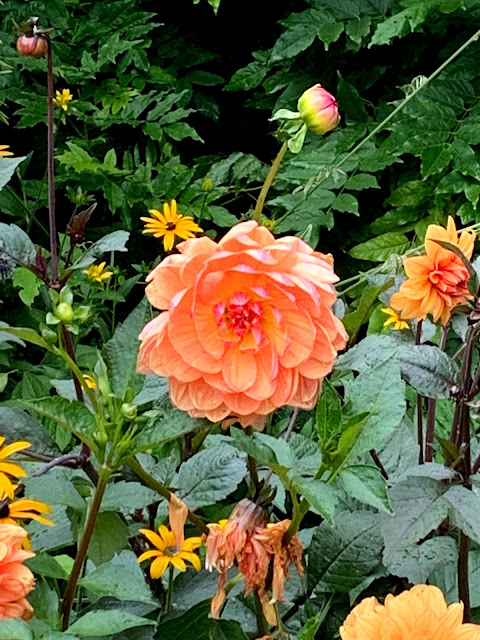 I focussed on this dahlia which I think is amazing, I would love to the know the name. 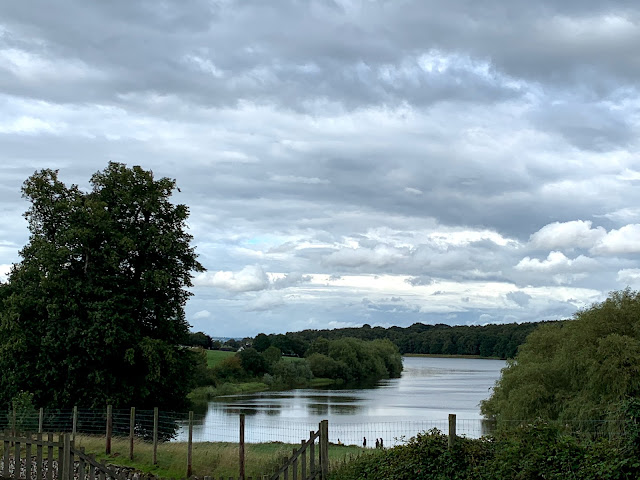 and I checked on the Staunton Reservoir level which is looking very high, much higher than in previous visits. 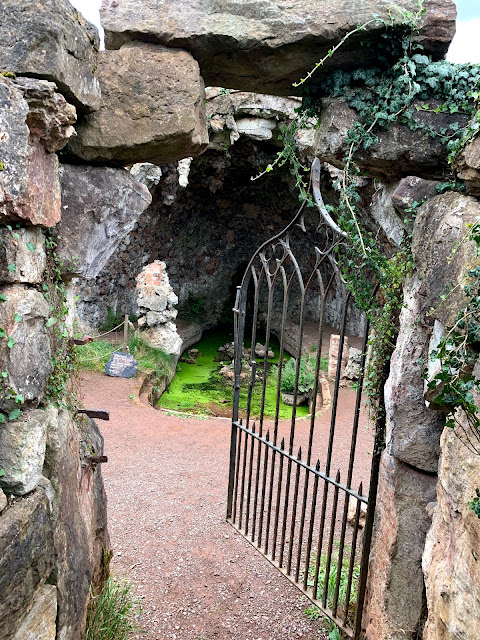 Another 'must do' for any visit to Calke is to say hello to the grotto, one of the best gothic grottoes ever in my very biased opinion.  This was a weird lumpy part of the park for many years when we first visited and now it is semi-restored state.  It is not over restored, I like that you can see its dilapidated state yet understand how it could have looked. 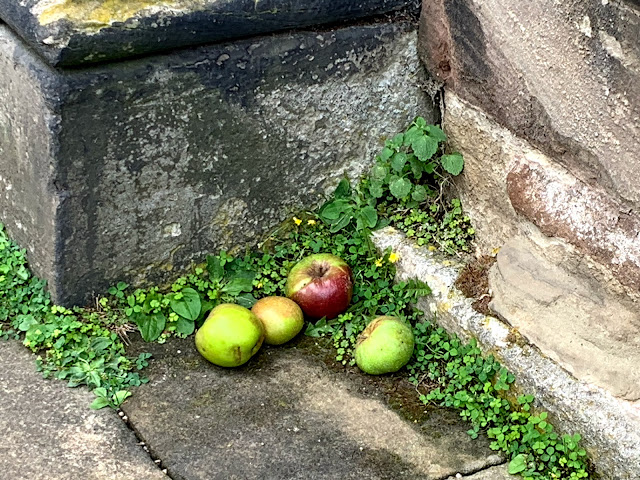 We had a really good afternoon. The car park looked full when we got there, but Calke is big and so a lot of people can be absorbed and so it felt socially distanced and safe. You have to buy timed tickets to visit so we felt we were being looked after by the National Trust.

I will be keeping you informed as to training progress.  Please do donate if you can, Perennial is such a worthy charity providing support for those who work in horticulture.  They have lost so many of their fundraising opportunities they would usually run due to the pandemic.  The call on their services has increased also due to the pandemic so every penny will help.  I need to reassure you that the trip itself is already completely paid for so every penny donated goes directly to Perennial.

Did I mention it was at night?

The full story of this quest can be found here