The Veg Diaries - ok boys, its time to move outside

May 27, 2020
Finally, finally the frosts have finished.  Phew!  That late frost in May caused me serious worry.  Now it is all systems go and my veg patch has moved onwards and outwards in the last week or so. 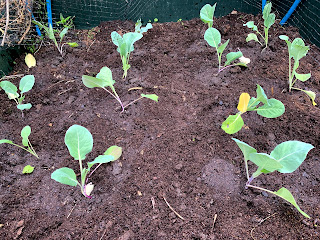 The brassicas have been planted out.  Some are in the raised bed  I made last year. 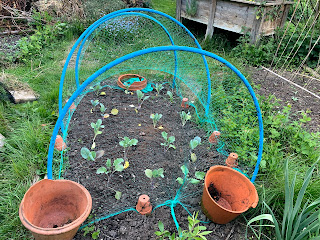 and some are in one of the old veg beds.  Please can you take a moment to be impressed that I have netted them.  Sometimes it is almost like I am a grown up.....
Earlier this year I received an email asking me if I wanted a bag of fly poo.  Ok, it might not have exactly been phrased in that way, but basically that is what it said.  A couple of days later and I got home from work to find a bag of fly poo leaning up against the front door. 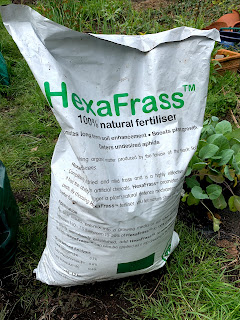 Hexa Frass is the byproduct of maggot farming.  Now I cannot imagine how many flies it takes to make this much poo, but it is a natural fertiliser and so I thought it was worth trying.  I have used this in my cabbage beds.  It is like fine powder and has no smell and quite pleasant to use and I will let you know how well it works. 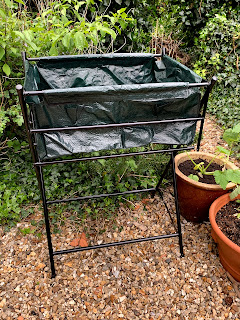 For my container garden I bought two of these containers on legs.  Dear reader, I am pretty good at constructing flat pack and putting things together.  These are not easy to construct. 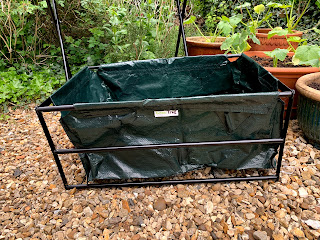 They should both be on legs, the second one was just not going to happen, it was fiendishly hard and so I decided to cut my losses and make it a ground container.  In these lockdown days returning things is just too difficult. 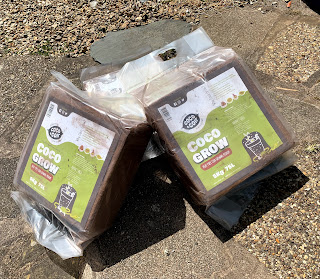 On a more positive note, my Coco Coir compost delivery arrived precisely at the time I needed it.  Last year I trialled this compost and was really pleased with it, so this year I bought some as I thought it would be perfect for the containers. 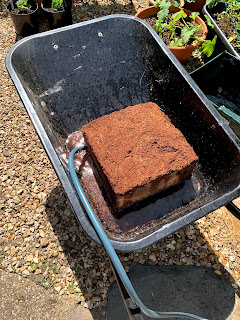 It is great fun to hydrate, 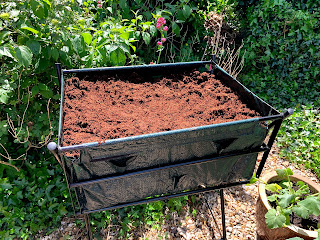 One block filled one and a half containers.  This made me very happy. 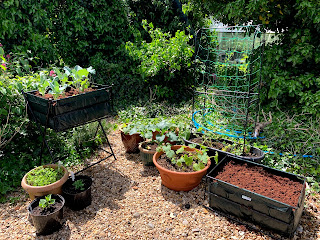 I planted out some more brassicas, sowed some more peas and beans and even sowed a 'carrot tape' of seeds that I found at the back of the seed box.  It is out of date but who knows, it might grow.
In the other pots you can see are some yellow runner beans and the courgettes. 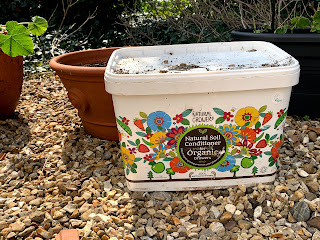 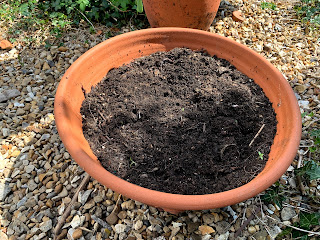 My demi-dalek pot has been turned over to courgette growing.  I reused the compost that was left in it from last year as it is a year of waste-not-want-not.  I mixed in some 'Natural Grower organic Natural Soil Conditioner I have been given to give it a boost. 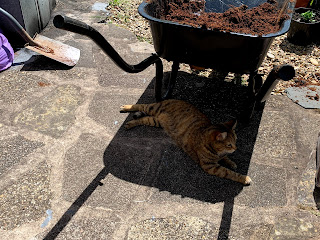 Whilst I worked in the container garden, Flossy kept me company by hogging the shade.
I soon realised I needed more containers.  I had run out of nice terracotta pots and the purpose built containers.  For a moment I thought I would need to order more, but money is always a concern and, as said above, it is waste-not-want-not.  I knew I had some old plastic pots in the greenhouse that I re-use for potting on.  I also had some large polystyrene boxes from somewhere I buy from.  I used them a lot as staging but I had a couple of extra ones and I thought they might be just what I needed. 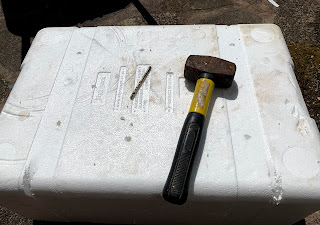 A few holes pushed through for drainage later and..... 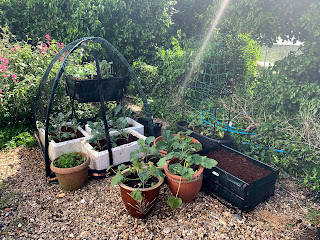 voila!  the container garden is not twee with its make-do containers, but then I am not twee.  The purpose is to grow veg and whilst it might not be pretty it makes me smile.  I also bought the rather wonderful net-igloo to put over brassicas.  (again, getting so grown up).  It has a handy zip in the front so that I can furtle around in the pots if I need to.
Finally.....
I set up the Hozelock Micro Kit I was given at the Garden Press Event to water the containers.  It was fun to put together, not difficult and it did remind me of when we had to design electric circuits when I was at school.  When I switched it on and it worked I might have given a small squeal of happiness. 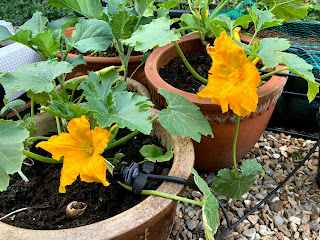 So all is good in the veg garden.  Things are progressing and the courgettes are flowering.  I have just ordered some spring cabbages and purple sprouting broccoli to overwinter.  These will arrive in August which means I have something to look forward to.
Stay safe.