May 17, 2020
Regular readers will know that RHS Chelsea Flower Show is the highlight of the show garden season for me.  I have attended every year since 2002 and would not miss it if it can be possibly avoided.  Of course this year nothing is usual and in the great scheme of things not going for a nice day out not high on my list of worries, but still I am going to feel the lack of not going quite keenly.
Thankfully the RHS have decided not to leave us totally bereft.  There is going to be a virtual Chelsea Flower Show online.  Details of which can be found here.  There are some really good things planned.
One of things I will definitely be taking part in is the voting for the Chelsea Plant of the Decade.  If you read The Garden Magazine there is a piece in there about it written by Graham Rice.  Every year I wander along to the area at the show that displays the runners up and the winner.  Now I am rubbish at deciding who should win as I go for what I think is prettiest and apparently it is not a beauty contest  (who knew!)  I decided I would tell you my top three and then as I looked at the article I broke out into a row with myself;  I could not limit it to three.  Then I thought I would rank them 1 to 10 with 10 being the least liked.  This felt rather harsh on number 10.  Then I thought how about focussing on the four on the list I have grown.  I still grow three of them but the one I no longer have I  would grow again.  It is of no surprise that all are very good plants as that, my dear reader, is the point (not a beauty contest....)  After much inward debate I scrapped most of these considerations and got straight to the point and made my selection and I shall tell you why. 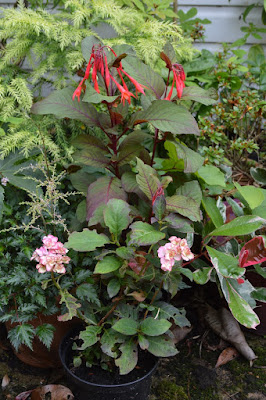 I chose Hydrangea Miss Saori (H2002), the 2014 winner as my top choice.  I do grow Miss Saori and this is a picture of it from a few years ago.  I grow it in my Courtyard Garden, an over-ambitious name that Hyacinth Bucket (pronounced boo-kay) would be proud of.  It looks a little slug nibbled here but it is a good hydrangea and flowers well.  Most importantly and the specific reason I chose it to win is that I think generally the stock photographs I have seen of it have not helped me imagine what it would look like in context. 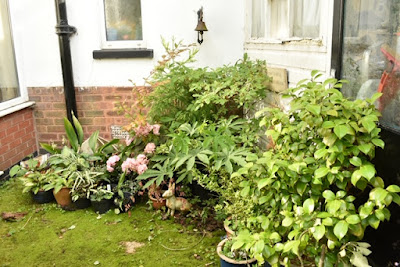 I was given this plant to trial as (if I am being honest) I do not think I would have bought it if I had not seen it flower in reality which is completely my point.  I am now trying to decide if I have still treated this as a beauty contest and added in a sympathy vote for good measure.....
The virtual Chelsea Flower Show opens on Monday 18th May to members and then to the public on Tuesday 19th May.  It runs until the 23rd May.  As well as the voting for the Chelsea Plant of the Decade there will be daily videos from well known designers, gardening presenters and experts.  There will be Q & A sessions and virtual tours of nurseries plus a daily School Gardening Club.  So there is lots going on.
There is much I am going to miss about not going to Chelsea.  I catch up with friends there, I often go with my daughter and for most of the years I have been going I go with my friend I have known for the longest.  It is always a special day. 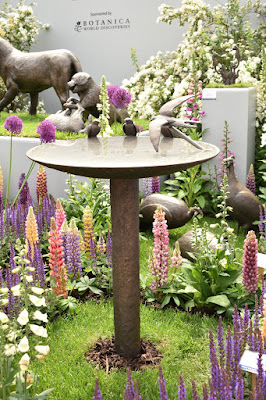 This year I will not be standing in front of this Willie Bird Bath and whispering 'She will be mine, oh yes, she will be mine'.  I shall miss this key part of my annual routine.
I will spend the next week reposting some of my blogs about Chelsea Flower Show on twitter and my Blackberry Garden Facebook page as happy memories of the times before and as a foretaste of what next year will bring.  I rolled my ticket purchases for this year forward to next year as it means I know I will have this to look forward to, at the moment having things to look forward to feels very important.
In the meantime there are other Chelsea related activities taking place also virtually such as the Chelsea Fringe.
There are also things such as  The Great British Gardening Quiz (I got four wrong ...) 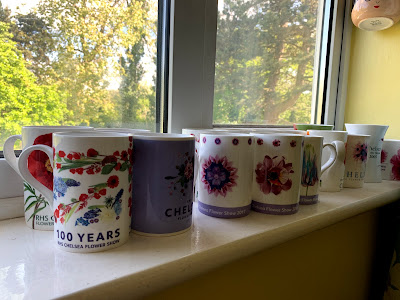 So it is chin-up and keep going time.  Not that I think this year will ever be forgotten but to definitely remind me there is going to be a covid-shaped gap in my mug collection.
Stay safe all.
Chelsea Flower Show RHS Chelsea Flower Show