April 29, 2020
April has been rather warm and sunny which has been very welcome.  We have finished the month with a bit of rain and that has come just at the right moment.  The garden has responded to the warm weather by becoming increasingly lush. 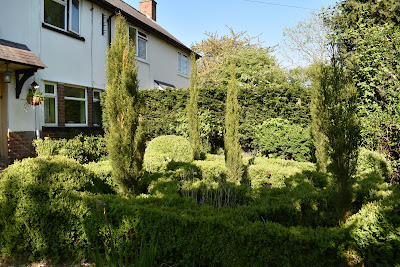 The front garden looks green.  The Box Knot Garden looks ok at the moment.  After having a real worry about Box moth last year, it seems ok so far but I am still wondering if I might have to remove the box at some point.  I have a plan B if this is the case and the problem with plan B is that I rather like the idea of it and might just remove the Box anyway.  Time will tell..... 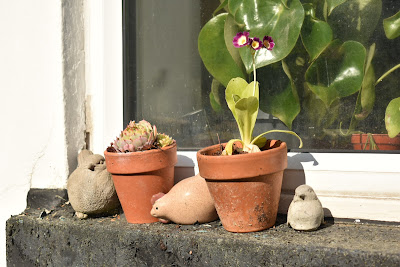 April has been a month of much thinking and enjoying the little things.  This little bird and pot moment on my kitchen windowsill firstly impresses me as it has not fallen off (yet) but also just makes me happy.  It is simple yet (I think) effective.  An 'enjoy the little things' moment. 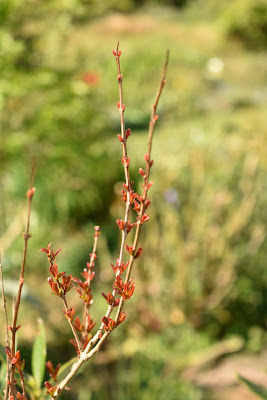 Another enjoy the little things moment is that the pomegranate is starting to leaf-up.  It took a year off from flowering last year so I am hopeful it will be back to form for 2020. 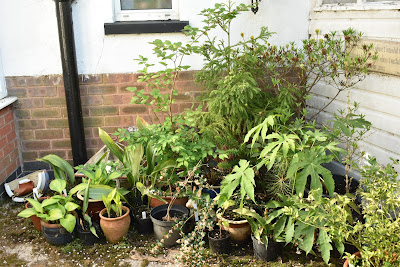 The Courtyard garden is looking wonderfully green.  The Rhododendron Lutea is about to leap into flower and then the space will be filled with scent. 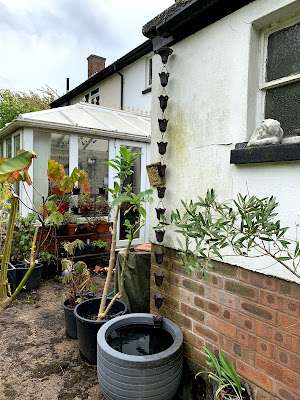 I have recently moved the rain chain, which used to hang from the corner of the conservatory to the corner of the utility room.  I realised that the wall was damp and getting a bit green on the outside and  when I looked up I saw that the end of the guttering was missing.  I also had wanted to create a dipping tub to be close to the Courtyard Garden container plants.  Serendipity took my hand and led me to relocate the rain chain to the open ended guttering and place a rather nice large plastic pot I had not used for other things yet solve three issues in one go.  The rain chain suddenly was being used properly for the purposes it was made for, the plastic pot also now had a role in life and the rain is being moved away from running down the wall.  Win, win win. 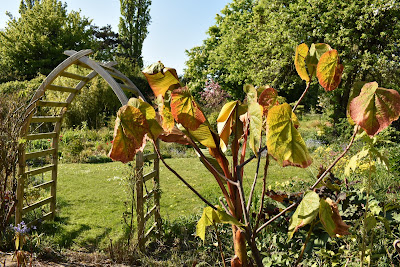 The Dombeya and Ensete maurelii have been allowed out of the conservatory now the nights are getting a little warmer.  They still have their bedraggled winter look but will perk up soon enough.  A bit of liquid seaweed will see them right again. 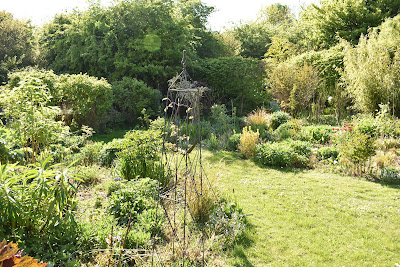 From this view, along the Coal Bunker Border across to the Pond Border, the garden all looks very green.  You can probably see some patches in the border  where there are fewer plants. 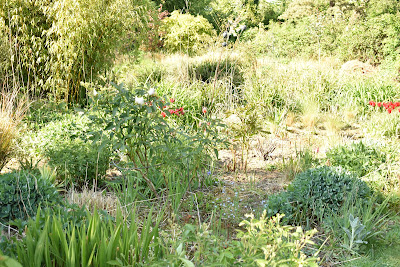 I have been busy this month removing the hoards of Spanish Bluebells and alliums I had allowed to get out of hand.  So whilst the borders do not look great at the moment, the plants have more space to breath and I have some new planting opportunities.  I know that I will be weeding out both invaders for many years to come.  I have removed a lot of bulbs but by no means all.  Just making a start on it made me feel better, it was a re-connecting with loving my garden moment despite never falling out of love with it. 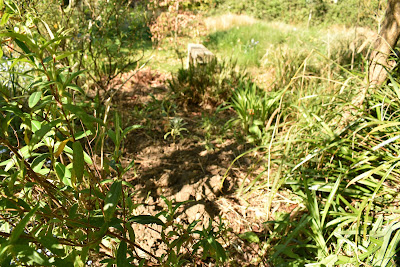 In the Exotic Border I have been removing Carex pendula.   I have to be more vigilant in keeping this under control as well. 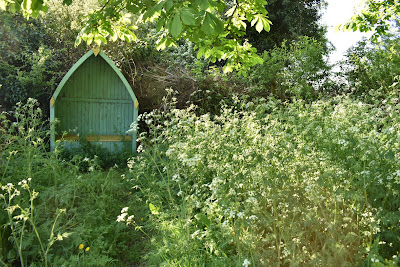 In the less cultivated area of the garden the Wild Garden is turning frothy. 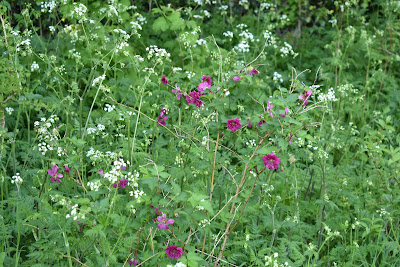 I know I am showing my age by thinking 'its frothy man'  (google it). 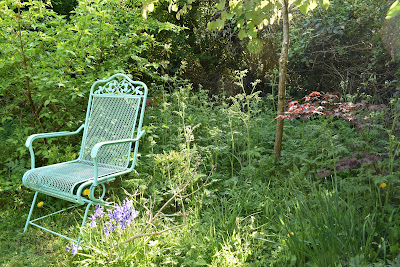 The Accidental Shrubbery, with a rare photo of the chair without Trev on it, is probably a bit more frothy than it should be so that will need sorting. 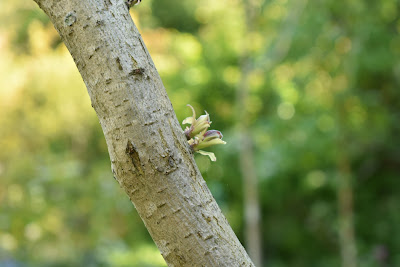 I was very happy to see my Catalpa aurea starting to show leaf.  It is always a late-to-leaf tree, but it was severely 'pruned' by the apple tree falling on it.  No sign of life from the apple tree trunk as yet, but at least this is ok. 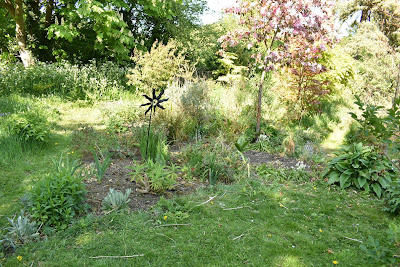 I have also cleared the Woodland Border of self-seeded echinops.  I have Prairie Borders full of echinops so the bees will not go short, but they were rather swamping this adjacent area.  I also like to have some areas with different planting in them.  If the echinops stayed then the distinction between the Prairie Borders and this area would blur.  Sometimes I want blurring, this time I do not. 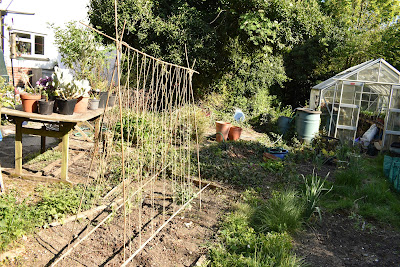 Wandering now down to the veg borders, the sweetpea frame is now in place and the first few plants planted out.  I sowed some in January this year, very early for me as I usually sow in March, and they have produced good strong plants.  Much better than my Autumn attempts at sowing which I gave up with.  I have more currently just sown in the greenhouse that hopefully will germinate soon. The greenhouse is quite full of seedlings and potted on plug plants at the moment.  I have lots more to sow but I am struggling a little to get compost.  The kindness of twitter has meant I have been advised of a local place I can probably get some from. 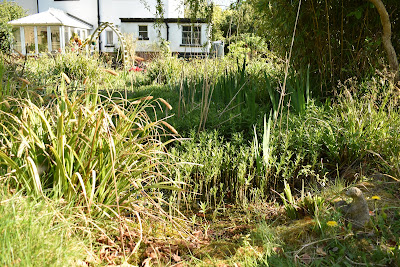 I end as usual on the pond which is, and I feel I should whisper, looking a little low again already.  I blame the drying wind, lack of recent rain and I think the overwhelming plants in it are probably drinking too much.  I seem to clear the pond of one problem plant and it just makes room for another!  Sigh.