December 15, 2019
The Garrya elliptica at the top of the garden is one of the few plants that was growing here before I bought this house.  I have to confess, they are not generally a plant I like very much and looking back through previous blog posts I cannot find where I have mentioned it previously.  After twelve years of living here and nearly nine years of blogging about my garden that is a pretty impressive record of overlooking it.  It is therefore no surprise when I say I generally find them rather dull..... 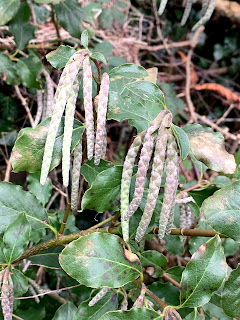 ......generally.   It is a shrub that has struggled as it did have a tree fall on it back in 2014.  It was very badly damaged and because I do not hugely care about it, I did not particularly mourn for it.  I pruned off the damaged bits and wished it well if it wanted to pull through in a dismissive 'I really don't care' sort of way.  I then pretty much forgot about it to be honest.  I sort of glanced at it every year when it tassled up if it caught my eye, but did not really take a lot of notice. 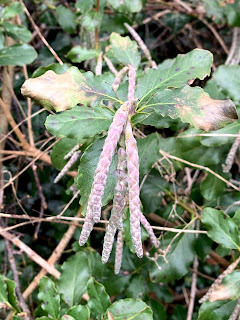 Then the other day I was doing my usual wandering inspection of the garden.  I said hello to the Gingko* that is in the top left hand corner of the garden and my eye wandered to the Garrya and... 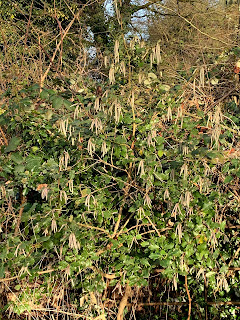 there is was shining away in the autumn sun.  It has suddenly become rather amazing.  I said nice things to it, I apologised for my (many) years of neglect and thinking badly of it.  I finally decided it was a shrub worth having for more than just covering the fence at the top of the garden.

As I walked away I am sure I could hear muttering and swearing and comments like 'More than twelve ble*ding years I have been growing here, twelve ble*eding years and now she looks at me';  comments probably (definitely) deserved.

Anyhoo, the Garrya is reborn and I am delighted with it.

*before you get too excited at the thought of a magnificent gingko tree at the top of the garden, I should mention that it was badly damaged when someone set fire to the land behind the garden many years ago.  If a gingko can be shrubbed, it was shrubbed.
Garrya Garrya Elliptica