October 23, 2019
I am having a bit of a coleus year.  I have acquired quite a few and they have relit my love of this plant.  Many moons ago when I was a teenager I started growing coleus as houseplants.  I had many.  I will probably write more generally about my coleus year shortly, but today I am highlighting, or more accurately, plant-shaming my Coleus 'Pink Chaos', or more formally (what it's mother calls it when cross) Solenostemon scutellarioides 'Pink Chaos'.  To me though, it is Coleus 'Sulky Pants' (with apologies to any plant that may actually have that name. 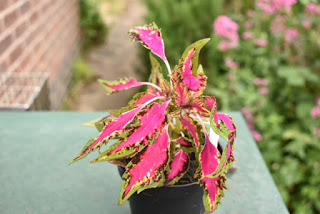 I bought this plant in June from the Chatsworth Flower Show.  It was quite small but I was happy with that, I looked forward to it growing into a fine plant.

It really sulked.  I fed it some liquid seaweed (which we all know is chicken soup for plants), it just stared at me.

I am sure it said 'meh' as a response.

I put it outside to grow on the plant table.  It shrugged.

I thought after a while, maybe it is not warm enough, so I popped it into the greenhouse to give it a bit of extra warmth/cover.

Then the temperatures started to dip into early autumn phase and I had to make a decision.  Would I let this plant just wither away as it was not delivering as I had hoped or should I try and save it. 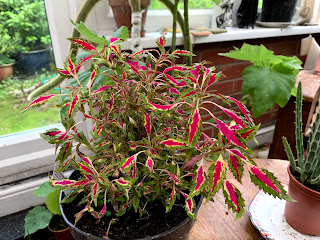 I decided to bring it indoors into the conservatory.

and what did it do as a result?

Suddenly started to grow and look like a half-decent plant.  This has left me with a curious mix of emotions that range from 'hurrah', to 'at last!' to 'what were you playing at all these months just sitting there sulking?'. 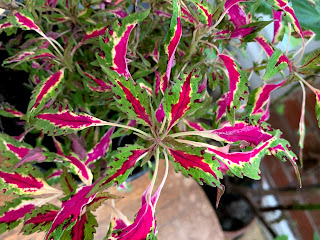 But she is rather lovely isn't she?
#IPotM Solenostemon scutellarioides 'Pink Chaos'