September 29, 2019
September has been fairly warm and fairly rainy.  Quite a lot rainy on and off, which for my garden has been no bad thing.

In the front garden the forgotten laburnum that is overwhelmed with ivy has decided to slowly keel over.  I am waiting for the tree surgeon to come and remove it as it is far too big and too skilled a job for me to tackle 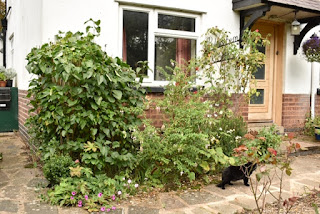 The border by the front of the house is looking about as good as I have ever seen it.  Trev also agrees. 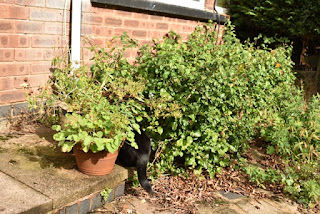 The quince hedge has also had a good year and looks very much like a hedge these days.  Trev was spider hunting, he likes a crunchy spider. 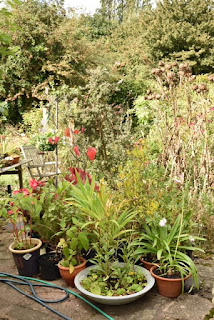 Around to the back of the house and the plants in pots collection is still looking ok. 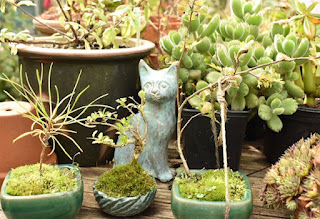 On the garden table there are my three initial steps into bonsai.  The middle tree is one I bought from Chatsworth Flower Show earlier this year.  I am very pleased I have kept it alive so far and I have also trimmed it a little to open up its shape.  The two either side are seedlings I have dug up from the garden and decided to bonsai.  One is a pine of some sort from next door's tree and the other is a hawthorn.  I can create a forest of bonsai hawthorn should I so wish.  I will let you know progress if there is progress, or I will never mention them again if it all ends in embarrassing failure. 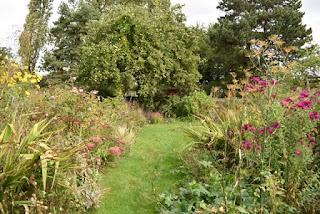 The Long Shoot is still looking quite colourful.  The garden is faring better than it did last year as the temperatures have not been so consistently high and we have had more rain. 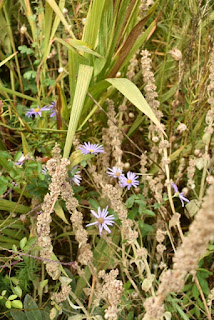 It is aster time in the garden and I love the twinkles of colour they provide. 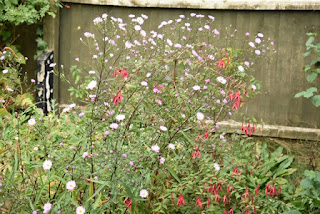 This pinky/mauve aster works really well with the fuchsia next to it. 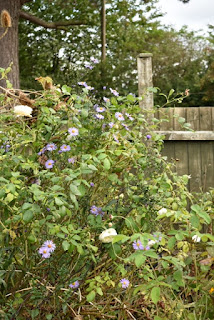 I have been training this purple aster through this Claire Austin rose, it holds it up really well and I think the colours work well together. 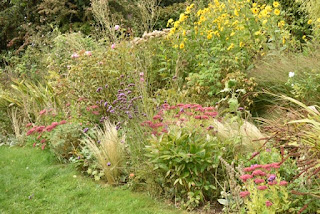 In the Pond Border the repetition of sedum always makes me happy.   I started with one plant, well actually I started off with a broken off piece of someone else's plant and now I have several throughout the garden.  They are so easy to propagate, I just pop a stem into a glass of water and a week or so later they have roots. 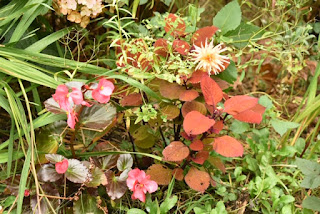 This begonia, dahlia and coleus moment in the Exotic Border makes me happy. 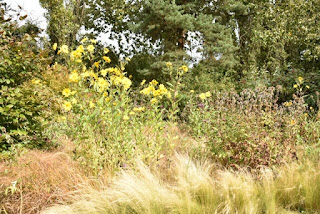 The Prairie Borders are at their blonde best.  The perennial sunflower is quite a thug, but it is a great value thug as it flowers tall and late and bees love it.  I will have to keep it thinned. 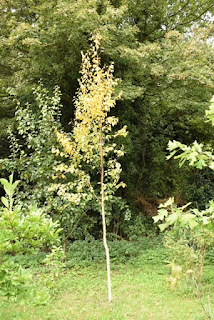 It is the time of year when trees start to take even more of a centre stage.  This silver birch is now becoming more silver and is a lovely tree. 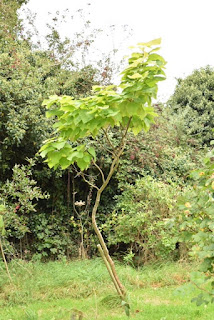 The catalpa has a bit of a bend, but is a good tree.  It was dual stemmed and I have removed the second stem in the hope that it will help it straighten up.  I know, I know, this is unlikely, shh. 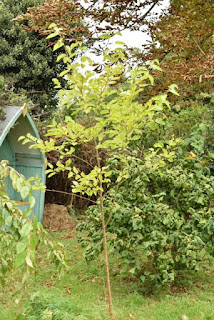 The mulberry tree planted a couple of years ago is now looking like its roots are settling in and it is growing well. 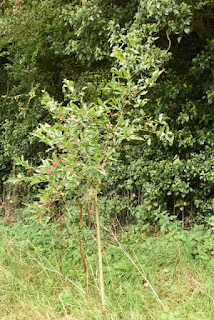 Similarly the Euonymous tree is growing well and has a lot of its gorgeous red berries this year. 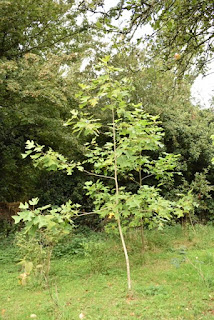 The tulip tree is just a delight.  I love this tree so much.  i think I will prune off the lower branches over the autumn, just give it a bit of a lift.  It is getting quite tall now and I still wait for the day that it flowers.  Apparently it can take about twenty years so I have about another ten to go. 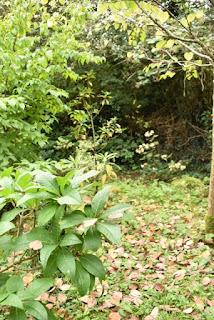 As I walk down the garden I say hello to the Secret Shrubbery, a new part of the garden that hides behind the Katsura tree.  In previous years I have let this be part of the Wild Garden, so it was full of nettles and a dark unused part of the garden.  Now it is lit with hydrangeas who seem to thrive in it. 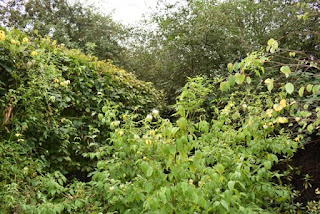 On the edge of this garden is the Cornus Mas, the Clematis Bill McKenzie has decided to romp across it which is no bad thing. 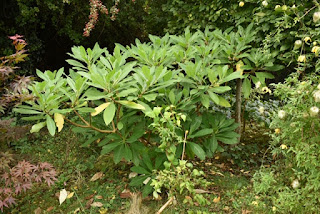 Just the other side of the pleached hornbeams is the Edgeworthia, which is now a rather large handsome shrub.  Every winter I worry that it might get too cold for it, but so far so good and I hope as it gets larger it gets more resilient. 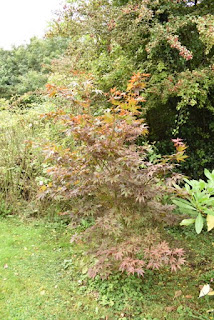 The Carol Klein Acer is now also reaching a good size.   I have no idea how old the tree is as I did not purchase it, but it has been in the garden for a good ten years and prior to that it had been kept in a pot.  I like to think how happy it must now be to have its roots free to delve into the earth. 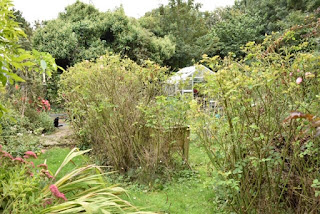 I have given the Rose Hyde Hall hedge a bit of a trim.  It was getting very tall and flowering more at the top.  I will probably reduce it down further over the autumn ready for next spring. 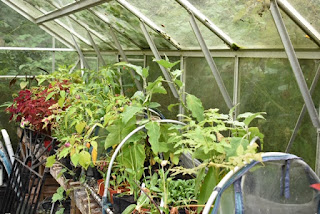 The greenhouse is quite full and this is before I have started to put things in to over winter.  I have been harvesting the aubergines, chillies and red peppers and this has made me very happy.  There are still quite a few left too so I hope they still have time to ripen. 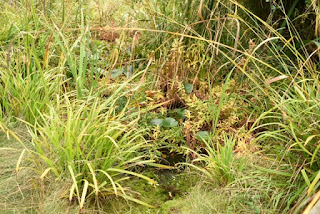 I end as usual on the pond.  I will be clearing it over the next few weeks as it is very overgrown.  The water level is much higher than usual for the time of year as we have had quite a bit of rain.  I am hopeful that it might completely refill over the winter as it failed to do so last winter.

Thanks as ever to Helen for this meme.
Edgeworthia chrysantha End of month review End of month view Praire borders