September 01, 2019
August decided to be quite a month for weather with blistering heat and torrential rain.  The garden, as ever, took it all in its stride and carried on. 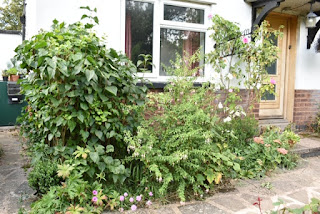 The border at the front of the house is always a bit problematic.  It is quite narrow and in the lee of the house and so often quite dry.  Add to that a huge handful of couch grass and it is a constant annoyance.  This year it is not looking too bad,  The pale fuchsia has grown quite large and I now cut it back from the path.  The anemones are starting to flower and you can see the pale pink of the sedums just starting to open. 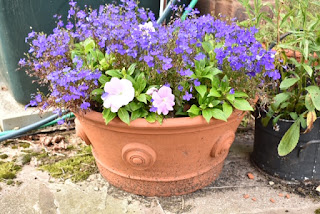 As I walk around to the back garden the 'half-dalek' pot greets with its abundance of blue lobelia and some pinky-mauve impatiens.  Pollinators love blue lobelia, I had no idea until I started growing it this year what a good long-lasting plant it is.  I am a convert. 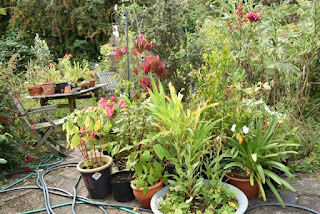 Further around to what I suddenly realised is a health and safety nightmare of tangled hose pipe (it has been sorted - promise) and the plants in containers are all doing well.  The recent heavy rains have helped keep them going and there has been regular watering as well (hence the tangle - shh). 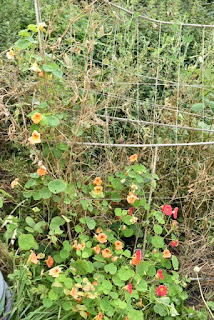 In the veg patch and this joy of nasturtiums is also where the sweetpeas are growing.  Where? where? I hear you say.  I had just picked this week's posy for the kitchen table but they are coming to the end of their life now.  Growing nasturtiums with them as worked well and the flower shapes and colours have gone together well.  I may grow this combination again. 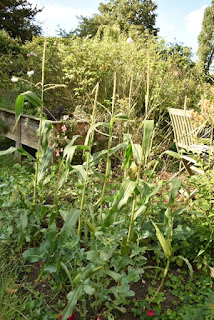 The sweetcorn is just about ready for harvesting.  It has done very well this year, heat and rain suits it. 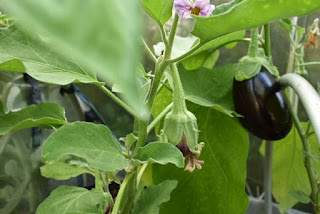 In the greenhouse the aubergines are doing very well.  I have been really pleased it them.  I bought them as plugs and I shall do so again for next year. 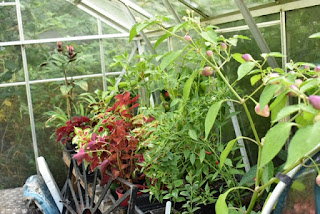 As I look down the greenhouse it is an ebullience of peppers and coleus, a fantastic mix. 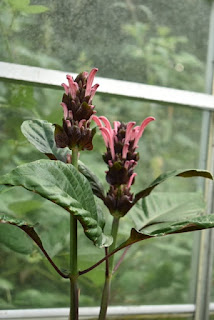 One of the Justicia carnea cuttings is starting to flower. 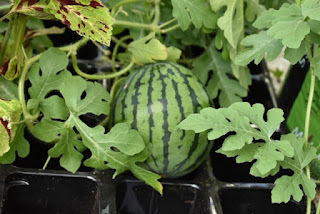 and the accidental watermelon is getting huge.  There were two, but one got burrowed into and started to rot so I have removed it.  I have saved the seeds from it, I may accidentally grow them again next year. 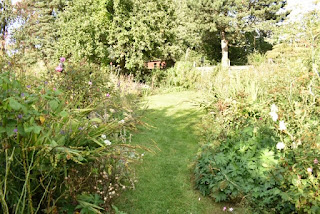 Back into the garden itself and the Long Shoot is looking good at the moment.  It's still got quite a lot of colour and generally I have been pleased with it this year. 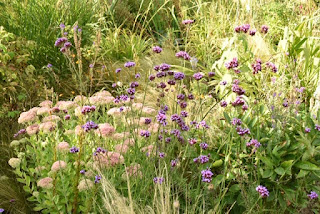 This sedum and Verbena 'bananarama' (some call it bonariensis...) combination really makes me happy.  The Verbena has self seeded itself into a little clump and it works well.  Sedums are one of the stalwarts of the Pond Border as it moves into Autumn and then Winter.  It has such good colour and structure, I think it is an excellent plant. 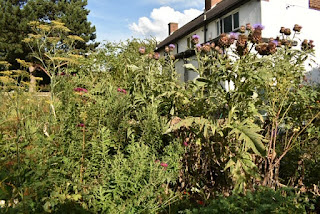 The Coal Bunker Border is rather tall from cardoons, bronze fennel and asters. 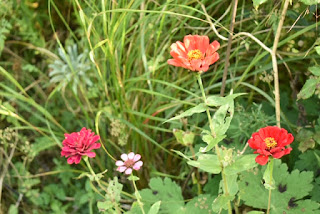 There are also small pockets of happy zinnias.  Always such a good annual to grow.  These were also bought as plugs, it just takes the pressure of faffing around with them as seeds. 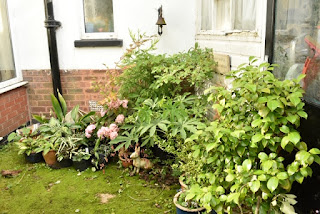 The Courtyard Garden has got mossy earlier this year than usual due to the wet weather.  I will de-moss it at some point. This area is all container planting and it has worked well this year.  The aspidistras have given it their approval as have the hostas.  The pink hydrangea (Miss Saori) has been flowering for weeks, I am very pleased with it. 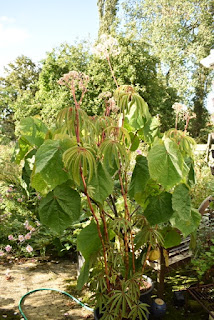 The Begonia luxurians and Dombeya rotundifolia are also doing very well.  Yes there is the tell-tale loop of another hosepipe in evidence, not a tangle though..... 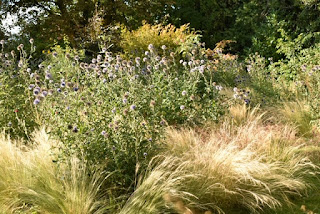 The Prairie Borders are full of bees enjoying the echinops. 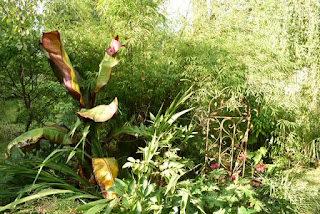 The Exotic Border looks lush from all the rain.  The Ensete maurelii is getting really quite large.  It has fared better now I keep it in a pot all year round.  I feed it regularly and I think not disturbing the roots by planting it and digging it up to keep it frost-free has helped it.  I just plonk the pot into the border where the rest of the plants grow up and hide and it and all is good.  I stood for a while looking at this border and at the Phyllostachys nigra which when I bought it, probably fifteen years ago, certainly before I moved to this house, was a small straggly bit of grass.  It has now formed a huge clump.  It does not run at all and is rather magnificent, but I did stand and consider just how big it now is. 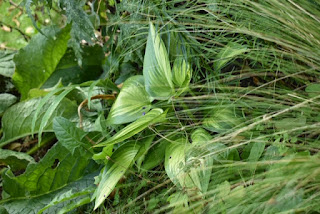 Up in the Woodland Border there is Hosta June.  This is really a wonderful hosta which was given to me by my friend June.  This ensures that I will not forget its name as I usually call plants after the person who has given them to me.  The leaves are virtually unnibbled and this is with no protection of any sort.  I am impressed. 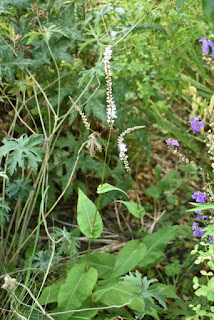 This pale persicaria is also in this border, it is also a joy.  Nice green good shaped leaves and punches of pale strips of flowers that create light. 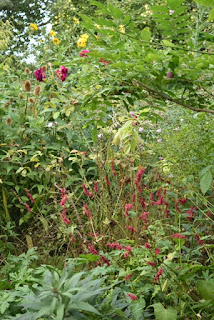 I have this red persicaria in several places along the Pond Border.  It is also a very good plant.  It is bulking up well and the spikes get quite tall. 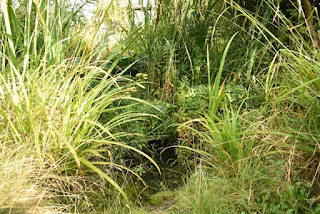 I end, as is traditional, on the pond.  Yes there is a pond in there, it needs clearing as usual.  This year it has not been a parrot weed issue, but some other plant that I have not kept in check.  It is a constant battle.  It is, however, relatively full of water.  Certainly more full of water than it was at this time last year.  So whilst I keep grumbling it has never refilled properly from last summer, I now temper this with the knowledge that usually it is much lower than this at this point in the year.