September 11, 2019
Regular readers will know that I am very fond of Easton Walled Gardens.  I always enjoy visiting and  they have some special events that I try very hard not to miss.  The Autumn County Market is one such event. 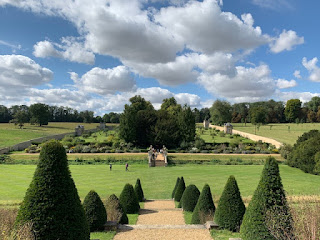 This is probably my favourite viewpoint of the garden.  I stand here and pause, the walled garden set in the distance makes me think of Alice Through the Looking Glass and the layout of the story as a chess board.  The sky often obliges by being pretty when I stand here, Lincolnshire has good sky. 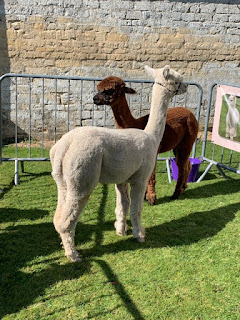 The fair this year was  an eclectic mix of local based products.  There were foodstuffs from local farms and crafts.  You could buy alpaca wool, wine, cheese, antiques and tea.  You could learn about bees and watch people grind corn all with a background sound of a steel band. 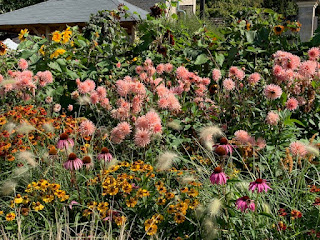 and of course there are the gardens themselves.  They were looking stunning.  This year there has been a bit of a change around as the sweetpeas were moved the vegetable garden.  This meant the Pickery was a riot of colour from dahlias and rudbeckias, echinaceas and heleniums.  This border in particular is just breathtaking.  I loved the salmon coloured dahlias and how well the grasses bound the border together. 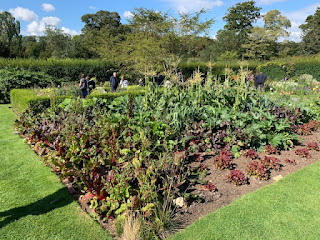 There was also this wonderful vegetable border, looking so beautiful and also so functional. 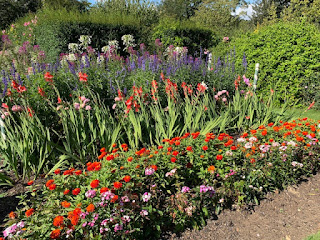 The September sun made the colours shine. 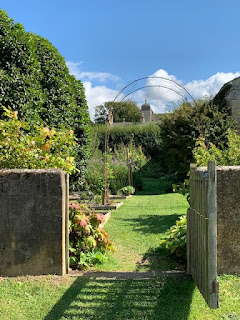 and even though there were many (many) people there, there was space for everyone to spread out and enjoy the grounds peacefully. 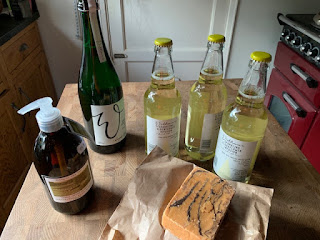 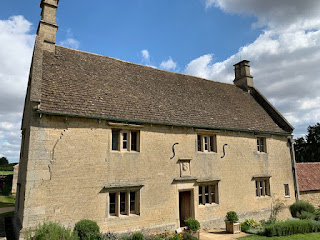 There was a small detour on the way home to Woolsthorpe Manor, the home of Sir Isaac Newton who it might be safe to say is one of the most important scientists certainly that England has produced if not the world.  Many people know of the story of him sitting under an apple tree and inventing gravity (no? you mean it existed prior to the point that the apple fell and he then  formulated a theory - oh, ok......)  Newton contributed much more to our scientific knowledge, including the principles of the laws of motion. 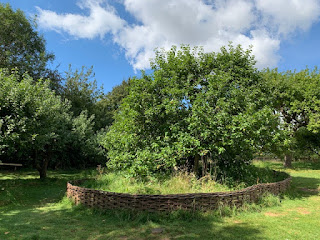 This is allegedly 'the' apple tree in the story, except it might have been an apple tree at his Cambridge college, Trinity College.  Whichever is true, and probably only Isaac knows, the one at Woolsthorpe is definitely 'an' apple tree even if it is not 'the' apple tree and he probably would have sat under it at some point, so it is close enough. 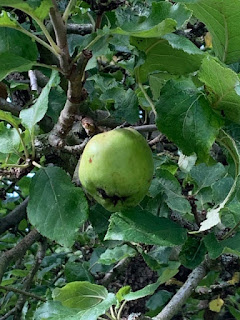 It is clearly a very old tree and it is still bearing apples.  Rather misshapen ones, but they are apples nonetheless. 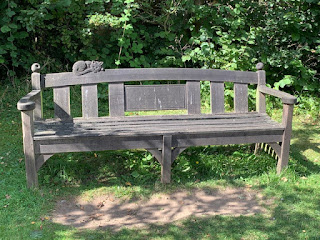 In the garden was also this adorable bench, placed here in the memory of Marian Woolerton, a previous occupant of Woolsthorpe Manor, the bench was made to celebrate her 100th birthday in 2003.  I love the cat perching on the back. 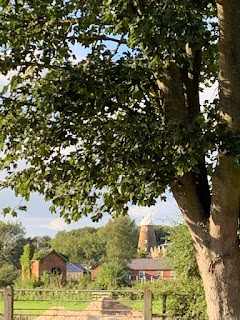 and on the way home I found a windmill.  It was a happy day.
Autumn County Market Easton Walled Gardens Isaac Newton Woolsthorpe Manor