Irritating Plant of the Month - the Yukka

July 24, 2019
When I sat down to write this post I thought I would check when I bought this plant.  It turns out I have had it four years.  This is the Yukka gloriosa 'Bright Star' which up until this winter been a good plant.  It has been very hardy being out in all weathers and I have been happy with it. 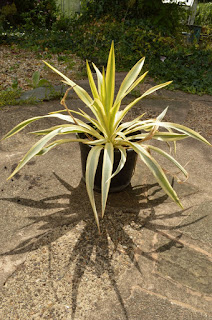 For avoidance of doubt, this is the 'before' picture....

Until this Spring when it suddenly went a bit dead on me.  This was very annoying.  Every time I looked it was a bit more pale, a bit more wambley (techincal term) and just looking on death's door.  It looked distinctly like it was rotting away.  By the time it got to mid-April I had little hope of it surviving so I dug it up. 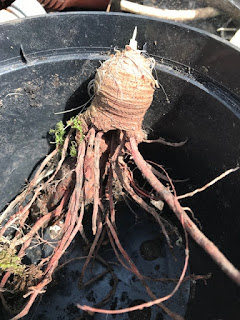 In my head all I could hear was it whining 'I'm dying , I'm dying' in a voice like the Wicked Witch of the West from the Wizard of Oz (yes I know she melted, but the plant is not).  As I got it out of the ground I noticed there was just one tiny spike of life left.  I potted it up and waited to see if it would recover. 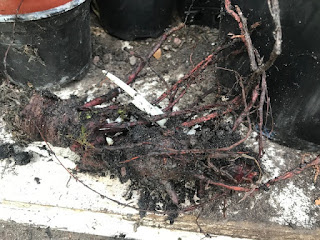 I am not known for my patience.  The plant, somewhat irritatingly, decided to carry on dying.  In June  I could not even see the tiny little spike so I decided to chuck it.  If thine plant offends thee, chuck it out!  I tipped it out of the pot and lo and behold there was a lovely spike of growth coming from quite a long way down.  The upper tuber (is it a tuber?) felt soft and rotten but underneath seemed rather healthy.  I removed the softer upper bits and repotted the plant. 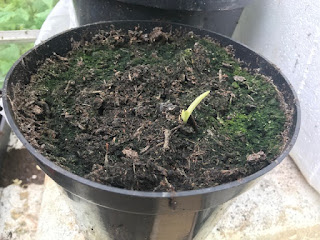 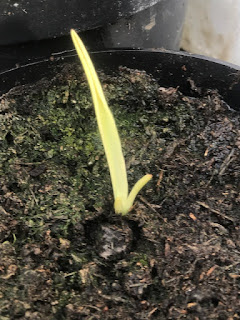 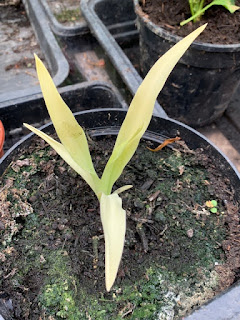 The Yukka has now reached the stage of a few leaves.  The compost needs refreshing and I will be feeding it to get more of its original colour hopefully to return.  It is a bit irritating that it is this pale and fairly uninteresting colour, but I am hopeful that it will recover to its former glory.

If you want me I'll be skipping down the garden skipping along a yellow brick road............ that looks not unlike crazy paving from a distance....
#IPotM Irritating Plant of the Month Yukka