July 21, 2019
There I was, going to Norfolk for the Garden Museum Literary Festival.  When first planning the trip  I had looked on a map and realised that it was close to where I spent many (and I mean many) holidays when I was a child.  I think we spent most of the 1970s in weekends and holidays in a static caravan in Hunstanton.  I have to confess that we went there so often that, cheerful teenager that I was, (ok not that cheerful) I grew to dislike Hunstanton rather a lot.  My memories are a curious mix of happy times and resentment that are generally the way of the teenager. 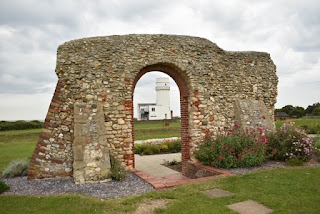 On the second day of the Literary Festival I had some time before I needed to be at Houghton Hall and I woke up wondering what I would do with that time.  I knew I needed to pop to Kings Lynn to buy something for lunch but then I had an hour to do with what I wanted.  Suddenly, as if from nowhere, the memories of Kings Lynn being a key moment on our childhood journey to Hunstanton came into mind.  Once we reached Kings Lynn we knew we were nearly there.  Before I knew what was happening the sat nav was set for Hunstanton and I was on my way.  At first I thought I would just drive through, but my mind turned to the lighthouse and the destination was decided.

I drove past the caravan park where our caravan was sited and I thought of my grandmother who often stayed with us when we were there.  I drove through the town and out towards the lighthouse.  As children we played on the lawns around here a lot.  My parents walked along the cliff paths and we used to go down to the beach to play and all the time our huge Old English Sheepdog used to bounce around like the good-natured idiot that he was. 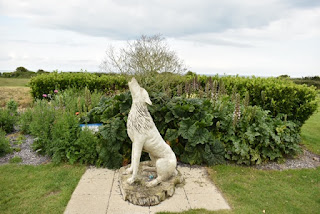 The dog sculpture was new to me, it could have been there thirty years but to me it is new. 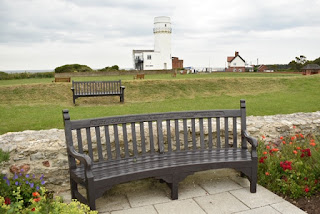 What I really wanted to see was the bench dedicated to Edith Cavell.  I remembered my parents telling me about her and how fascinated I was with her story.  This small garden close to the lighthouse is dedicated to her.  In my memories this garden used to be bigger, but of course I was smaller. 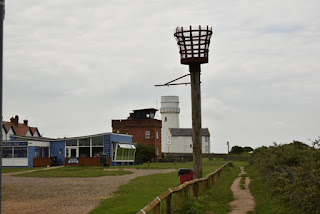 I walked down past the lighthouse.  Hunstanton was still waking up at this time, there were a few people walking dogs but not many people around at all. 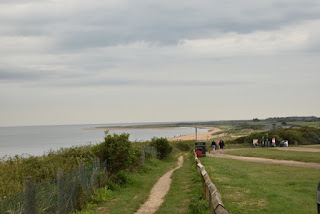 I did not go quite as far as the beach, but I stood and remembered the curve of the bay.  I remembered my younger brother digging in the sands. 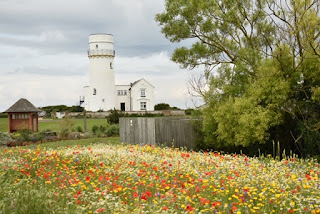 I then wandered up along the road a bit; my eye had been caught by this glorious wildflower display and I wanted to check it out.

Then I got back in the car and drove along the roads of my childhood.  I remembered the long drive to Norfolk.  The places we stopped for lunch, the names of the towns on the way.   I remembered that my gnome Sam came from the journey to Hunstanton, we used to drive past the place that sold gnomes and other concrete garden ornaments.

Many of the roads were lined with red poppies.  I loved them, I noticed them all the time.  They fascinated me as I could not believe that someone had spent all that time planting them.  It was explained to me that they were wild flowers and had seeded themselves; it was a key moment when the magic of nature was becoming apparent to me.  I was told that poppies love soil disturbance.  We talked of why they were the flowers of remembrance for the two world wars.  We talked about how they can remain dormant for decades before waking up.  I remembered all this as I drove along.  I remembered the Monet picture of poppies that I bought at that time and that I still have. 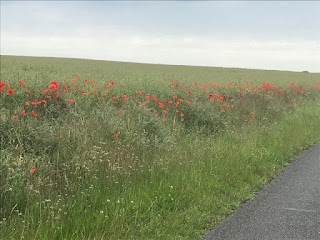 I remembered I remembered.  I stopped on the side of the road to photograph the poppies and I drove on happily.  It was a moment of deep retrospection.  All these years of disliking Hunstanton yet I realised in that moment that without going there I might not love poppies so much.  Hunstanton was the start of it all.  A nugget of warm happiness glowed and the seeds of affection for this seaside town germinated. This time-filling aimless drive had fulfilled an important purpose.
cornfield poppies Hunstanton memories wild poppies