June 30, 2019
June has been a month of quite a bit of weather.  It has been dry and then the rain arrived, lots of rain.  It has been mild, it was been warm and then it became very hot.  This means everything in the garden is growing at 300 mph, especially the weeds. 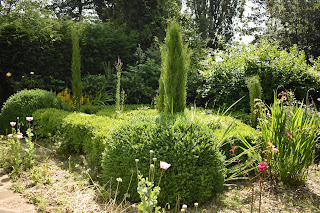 In the Knot Garden there has been a small resurgance of poppies.  The somniferum poppy can wait for decades before the right conditions occur for it to germinate.  They love soil disturbance so it is not surprise that where I have removed the lavender edging has resulted in some popping up.  When I first created this knot garden over ten years ago, the first year it was a sea of lavender poppies.  I am just so soppy I could not remove them as the effect was stunning.  Please focus on the poppies, not the weeds.... 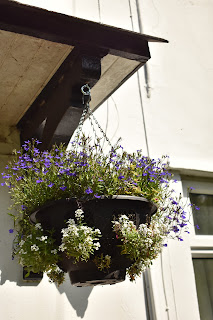 Please also do not laugh at my hanging basket attempt.  I keep saying it will all knit together and hide the black plastic, but I wish it would do so.  I have had this basket for several years so I wanted to reuse it rather than buy a new one as I feel if I already own the plastic it is better to use it then just throw it away.  Anyhoo, you can see it is a sixties retro vibe of blue lobelia and white alysumm.   The lobelia is clearly the more vigorous at the moment.  I keep it watered and I am feeding it weekly.  The bees love it.  There is also a trailing coleus in there.  It is not trailing a lot yet but I live in hope. 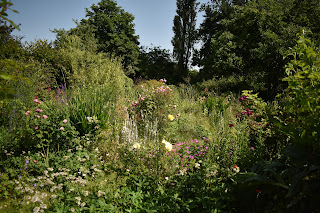 I walk around to the back garden and the first view it looking differently from recently.  I have not been able to show this view for a couple of years as the Manx rose had grown too large and filled the space where I used to look through. 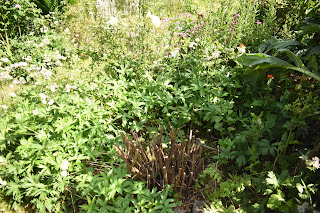 So I have cut it right back to the stumps.  This is a very vigourous rose, it will recover, honestly.  I had let it get too big and I need to be more careful with it going forward.  It is such a good rose I have no intention of losing it. 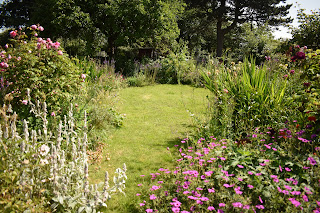 The Long Shoot is showing how much growth the garden is putting on.  The start of the path is almost lost under the stachys and geranium who are reaching out to meet each other. 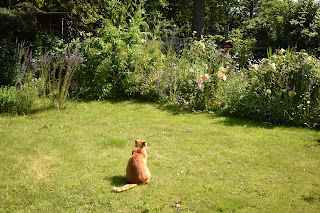 His Gingerness, the wonderful Bruce, sits and checks that the Conservatory Border meets with his approval. 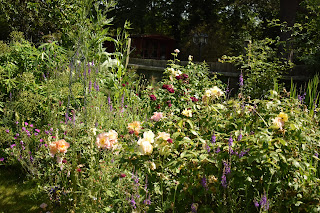 It is looking very rosey at the moment and I am generally happy with it. 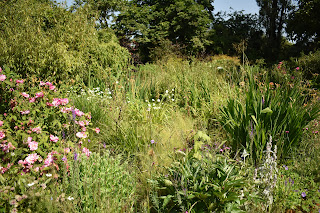 The Pond Border, which now has the 'hedge' of Rosa Claire Austin removed looks rather green but now gives a view across the pond.  What Pond? I hear you ask,  it is a little overgrown..... 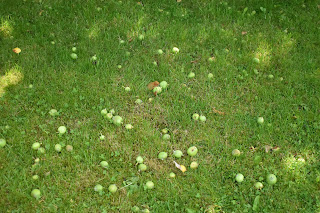 I was walk around the garden the evidence of the 'June Drop' makes the walk very bumpy.  I sometimes worry that so many seem to fall but there are always plenty left. 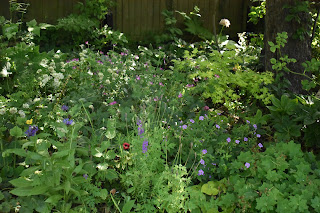 Under the Bramley Tree the Spring Border has now morphed into Shade Border.  The hellebores are dying back and geraniums and small acer are coming to the fore. 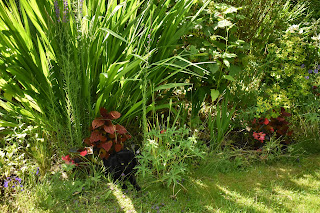 The Exotic Border has seen a small outbreak of coleus and begonias.  I like both very much and I think they have made good punches of colour into the green. 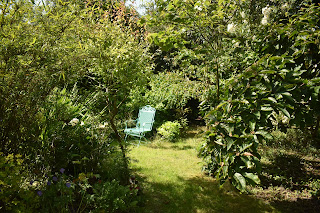 As I walk past the Exotic Border I get a nice view between the Prunus Ben-chidori and the Medlar Tree towards my new shrubbery area.  This area has just been part of the Wild Garden previously but it is a nice sheltered spot for various shrubs and I have been developing it over the Spring.  The main real difference is that I have been mowing the grass here when in previous years I did not apart from in the Autumn.  This keeps it easier for the shrubs to establish and thrive. 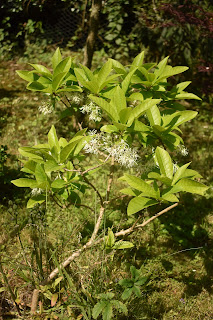 By the side of my rocking chair, this pretty little tree is a Chionanthus virginicus, which I have had a few years now but has been a bit underwhelming so far.  It is one of the plants I dug up to possibly relocate with last year and when I replanted it I put it in this new location by the shrubbery.  The soil is better here, it is well drained but also has moisture.  The tree seems to love it and has rewarded me with its fringy flowers. 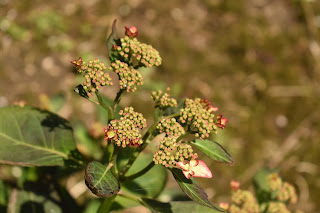 Also in the shrubbery is this very nice hydrangea that is just starting to open.  I will show more of the shrubbery as it develops in a separate post so that you get more idea of what it actually looks like. 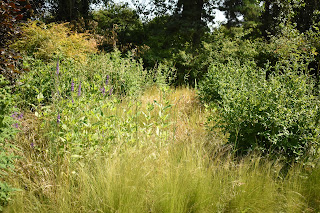 Meanwhile the Prairie Borders are chock-full of weeds but the grasses are growing well.  I really do need to give it a good determined weed. 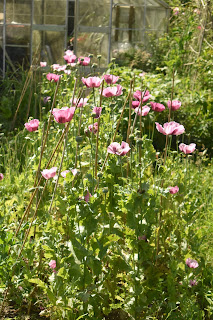 Did I mention I was soppy when it comes to poppies?  This is one of the veg borders.  It is full of self-seeded poppies that are a haven for bees and hover-flies.  They are attracting so many much needed pollinators into this part of the garden I cannot pull them out yet.  Let's face it, they just look so pretty too. So do not grumble and tut at me too much.  This is my Three Sisters planting this year.  There are runner and borlotti beans, some yellow courgettes and sweetcorn.  The odd poppy is in there too - oops. 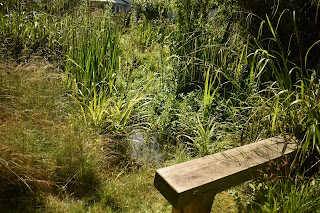 I end, as is traditional, on the pond.  Yes it is very overgrown this year, it feels like when I manage to control one invader another takes its place.  You can actually see a tiny puddle of water which shows it was refilled quite well by the recent heavy rains.  It still has not reached full, it has not been full all over the winter so I am watching the level carefully.  I may have to break my rule of never adding water to it if we get a drought like last year.

Thanks as ever to Helen for hosting this meme.
Chionanthus virginicus End of month review End of month view Exotic Border Knot garden