May 01, 2019
Surely it cannot be the end of April already?  Well yes it is (and don't call me Shirley as a wise person once said).  What a month it has been!  There has been warm sunny weather and surprise frosts, there has been a stormy day of Storm Hannah but what there has not been is enough rain.  There has been some rain, but not a lot of rain.  I might be (am) obsessing a little about how little rain we have had. 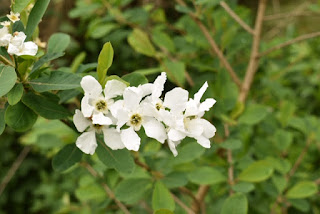 Let us start in the driveway, the Exochorda 'The Bride' is flowering really well this year. 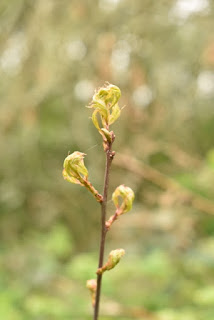 and one of my all time favourite trees, the Pin Oak, is coming beautifully into leaf. 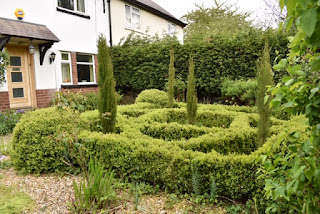 The Knot Garden is looking green and lush (despite the lack of rain).  The removal of the lavender edge has been universally approved by various delivery people, whose comments have made me realise what an awful mess it was looking before I made the change. 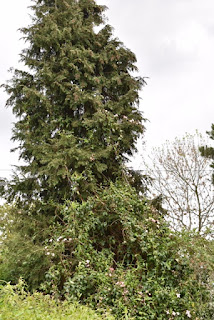 If you look carefully at my neighbour's conifer you can see that my pink clematis has climbed a long way up it.  This makes me smile.  The neighbours have never complained so I assume it makes them smile too. 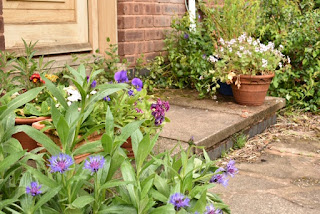 The front step is looking rather colourful at the moment.  This too makes me smile. 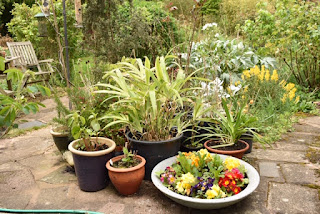 In the back garden Spring is in full swing.  The majority of the daffodils are over and the tulips are in their final throes. 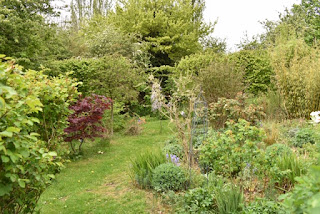 I love this view past the wisteria tree that is just coming into flower.  I like that the eye is led along the grass, through the pleached hornbeans and beyond into the Wild Garden. 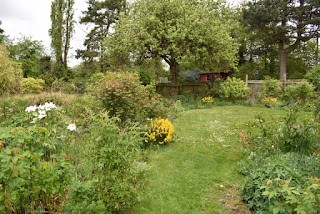 If I turn 90 degrees and look along the Long Shoot and I am equally pleased.  You can see the splash of white tree peony and the yellow of Erysimum Harpur Crewe.  There is also the dandruff of daisies along the lawn. 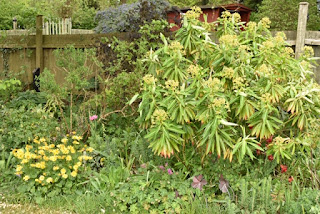 If I step a bit closer you can see the Euphoribia mellifera in all its glory.  The scent of honey from this shrub is just outstanding.  I have never noticed it as strong previously, but it is now becoming a sizable shrub which must have some impact. 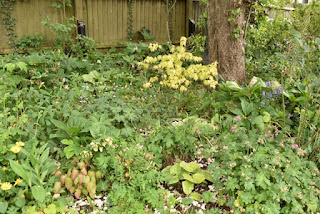 The Spring Border is starting to get more green now.  The small acer Orange Dream is very slow growing and works well under the Bramley Tree.  This year it has flowered, it seems like all the acers have flowered this year, I think it may well be the mild winter causing this. 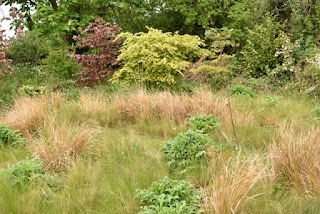 The Prairie Borders are starting to regrow well now from their spring hair cut.  Stipa tenuissima is very forgiving and will soon be at its best again. 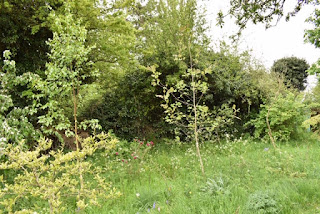 In the Wild Garden I keep realising how tall the trees are now getting.  They were all planted as mere twiglets but now are getting to be, well, tree-like. 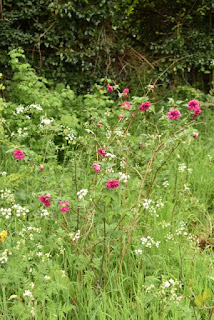 This is Rubus Olympic Double, shining pinkly in the emerging cow parsley.  I bought this shrub some years ago and it always flowers well.  It also likes to sucker but so far has been doing this fairly politely so I am letting it be. 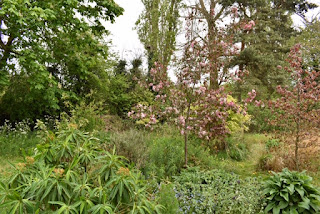 The Malus Rudolph is in full blossom and dominating the Woodland Border/Bog Garden. 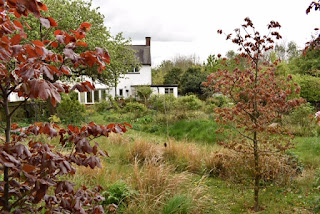 Whereas the beech pillars are slowing unfurling their leaves, one tree at a time.  They must be showing how the sun works down this part of the garden. 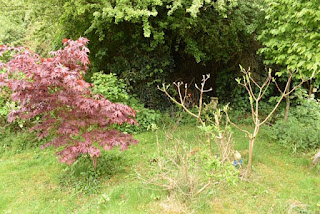 The Four (five) sisters are doing well.  The Carol Klein Acer has flowered this year and it getting to be quite large. 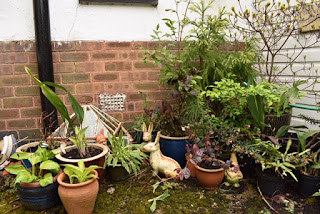 The Courtyard is becoming the aspidistra and hosta corner.  I have popped a few of my aspidistras outside as they are very hardy really and I think they will prefer being outdoors to being held prisoner in my lounge.  The Hosta Stiletto I bought the other day is keeping the other two potted up hostas company.  They seem to survive slugs a bit better if kept in pots in my garden and I like how they look in pots. 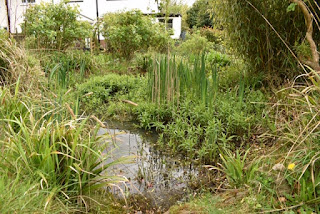 I end on the pond as is traditional.  I think not one tadpole survived the newts, which is a real shame.  It is also getting a bit full of plants so I will have to think it out.

Thanks as ever to Helen for hosting this meme.
End of month review End of month view Hosta Stiletto Hostas Rubus Olympic Double