Irritating Plant of the Month - Aspidistra-shaming

March 24, 2019
Regular readers may recall that back in September I commenced a small binge (a binge-ette) of aspidistra buying.  I have a total of eight at the moment, not all different varieties but a nice collection that makes me happy.  Although they are called the 'cast iron plant' allegedly because of their robust nature and happiness to be neglected; I of the opinion that they are happy to be neglected in a very particular way and react badly to other forms of neglect.  I think I have learned to water them sparingly but sufficiently and I have hopefully just resumed a careful feeding routine. 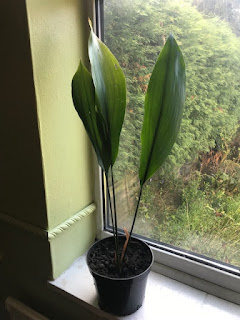 I bought this Aspidistra Asahi in October last year from a plant fair.  It was and is a fine healthy plant, though it did rather alarmingly lose a leaf or two when I first got it home.  I think that was my fault (see above about giving them the right sort of neglect).  It has since settled down well and generally makes me happy, except.......

All of the other aspidistras, and I do mean all, have started celebrating spring by putting up new leaves.  There is something very exciting about a new leaf on an aspidistra, they are slow to grow so each new leaf is a celebration.