A snowdrop wood in Normanton 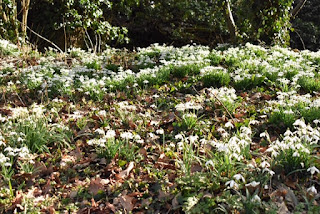 There is a reason why snowdrop gardens are so important and it is shown above.  There is something about the glinting of winter sunlight through snowdrops that gladdens the heart.  For me it is impossible not to stop, breathe and smile at this sight. 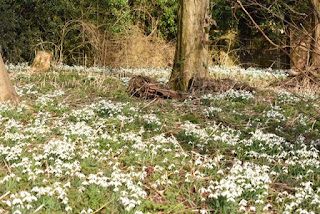 This is not a large wood, but there are many snowdrops.  I noticed that many were the double flore pleno type, they appeared to be the majority in the wood.  I was fascinated by this.  Obviously the snowdrops have been here a long time and so whoever started the planting must have planted them.  Maybe they preferred them?  Maybe they spread faster than the single nivalis?  I do not know, but I have never seen so many of this type in one place previously. 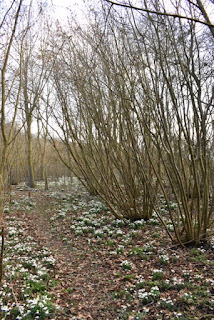 It was quickly obviously that we were walking through coppiced hazels.  You could see that these hazels have been coppiced for a long time as the base trunks were large. 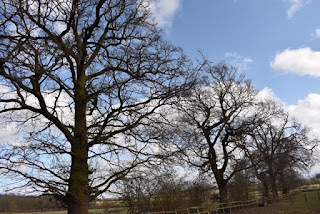 We walked on, out of the wood and stood looking out across the fields.  This line of impressive oaks stopped us for a moment.  To stand by such trees is to stand and ponder all that they have seen.  Who else has stood here for how many generations?  Who planted them and did they imagine all that the trees might witness? 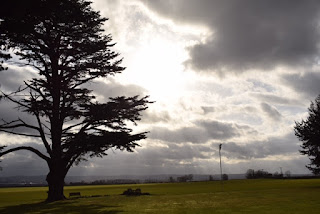 Around to the front of the house and there is this impressive cedar tree.  You can see by the change of sky that it was a changeable day, mainly sunny but for a brief moment the clouds threatened to take over. 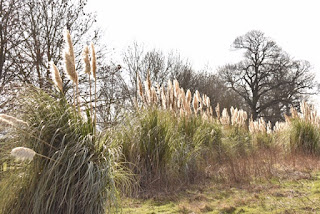 and to the side of a field was this boundary of pampas grass, glistening in the sun.  The pampas grass probably created more debate than anything else we saw on the day.  Like many people I associate pampas grass with front gardens, usually inherited from a previous owner and just so difficult to remove.  Yet here as a boundary hedge they looked magnificent, I was in awe of them. 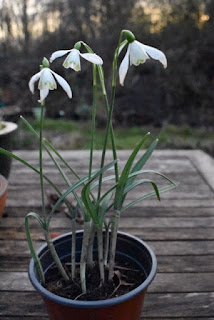 The garden/wood was open to raise money for the local church.  They were selling pots of snowdrops as well and it is rude not to buy some. 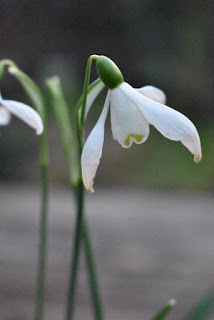 I chose this one as the markings seemed quite an unusual pale jade green. 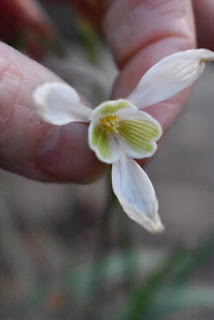 Almost yellow, but not quite.  I declared it immediately an important find and named it Galanthus Leveyii.

Tea was drunk, meringues were eaten (I find meringues hard to refuse) and the world was set to right.  Now to plan the next snowdrop visit......
galanthus fore pleno galanthus nivalis snowdrops