Irritating Plant of the Month December 2018 - the Poinsettia mocks me

December 23, 2018
Well this is not so much irritating as just plain embarrassing.  If I may just dial back the clock seven days to this time last week.  This time last week I was proudly displaying my plant purchases which included this small, but pretty, poinsettia. 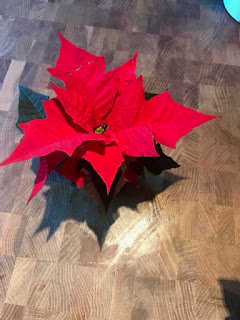 Pretty little thing isn't it?  I wrote how I usually associate poinsettias with certain death and that is why I have never bought one before.  I looked up how to look after it (no draughts, tepid water - not too much not too little etc) and vowed to do my best by it.

Well dear readers, I present to the debacle that was formally known as the pretty poinsettia. 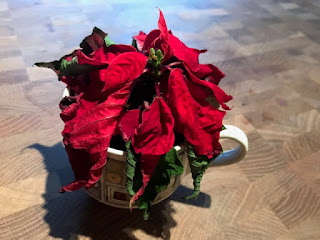 I mean, just look at it, in less than a week it has gone flop.  Its once proud leaves/bracts are now as limp as a silk handkerchief without the lustre and shine. I think it was in a draught, so I have moved it but I think it is indicating to me that I live in a draughty house.

I am hoping it will recover (I know, I know, but maybe there will be a Christmas miracle??)

and yes, it is in a teacup, a rather lovely Kathie Winkle teacup, 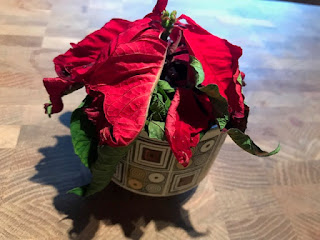 the pattern is called Rushstone.  This cup has a crack in it so rather than throw it away I have repurposed it as a pot holder.  Waste not want not as the saying goes.
Euphorbia pulcherrima IPotM Irritating Plant of the Month Kathie Winkle poinsettia Rushstone