October 18, 2018
Some days do not go according to plan.  You think you will be driving to work as usual, doing worky stuff and then coming home again.  There may be an surprise or two along the way, but the route-plan of the day is fairly standard.  Then, when you least expect it, something happens and you have to go with the flow.  Such was my journey to work the other day.  One minute I am driving along happy happy, the next the car is making weird unpleasant noises and I know I have to get help quickly before it gets more serious.  Thankfully I was close by the garage I usually take the car to, so I made a detour.

Then I had a decision to make, would I wait to see what the problem is or try and continue to work.  'How far to the nearest train station?' I ask.  'About ten minutes walk' is the reply.  A quick check of train times and fares and I decide this is the best course of action.  I set off: down the road, through the twitchell/alleyway/cut-through/snicket (whatever your colloquialism is) and suddenly I am heading over a disused bridge.  Now I confess on the journey into work I was focussed on finding the station and only paying passing attention to my surroundings.  On the way back however I was less rushed and as I reached the disused bridge the thought hit me - its a pre-Oudolf  'Highline'.  Ok, it is not a long disused railway in New York, it was a small bridge that looked more road than railway, going over a dual carriageway in the Midlands, but its probably as close as I will ever achieve. 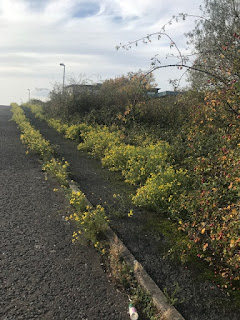 It was lateish afternoon by the time I was returning and the sun was already turning that late goldy colour that is so beautiful this time of year.  I admired the yellow groundsel flowering and overlapping the remnants of the footpath.  The bridge was edged with gold. 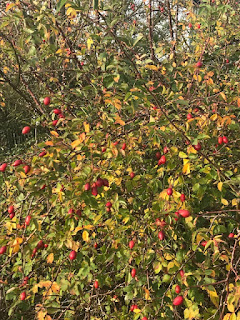 There were wild roses reaching out to try and catch passers by.  The red hips were shining in the sun and I wondered how magnificent they must have looked when in flower. 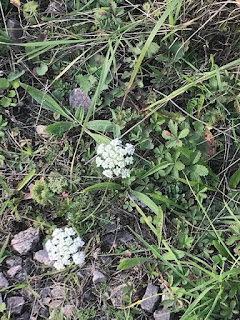 I peered more closely at the wildflowers, there is yarrow and a mix of 'weeds' struggling and successfully surviving in this harsh terrain that they seem determined to reclaim. 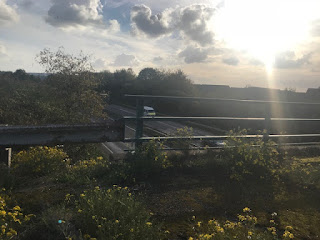 I stopped and looked out over the dual carriageway, thinking that this was pollinator-heaven amidst the pollution from the roads.  I must have driven under this bridge many times but I have no recollection of ever actually noticing the bridge and certainly no understanding that it was its own natural haven. 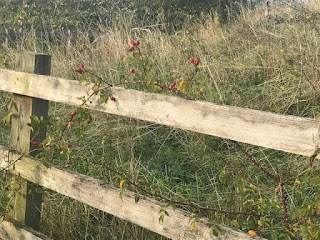 The walk was surprisingly regenerative after a 'not going to plan' sort of day. 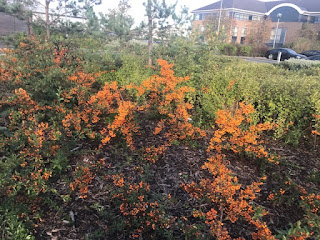 As I turned the corner the planting became corporate, a clear indicator that I was back where people were controlling the landscape again.  I paused momentarily to consider how precious the small strip of untamed land was that led over the bridge.  These small pockets of undeveloped and reclaimed land lie in between our roads and factories and houses, hidden in plain sight.  The brambles and weeds rule over them making them precious for our wildlife and insects.

This small walk inserted into what had been a troubling start to the day, a peaceful pleasant moment.
nature walk pollinators reclaiming landscapes wild flowers