Irritating Plant of the Month - August 2018

August 23, 2018
Its been a while since I have had a plant irritation, I looked back and it was March since something had created enough ire in me to require a shaming.  I could give you reasons as to why there has been a break but life is too short for such things and quite frankly, nothing was really crossing my horizon that made me think it was worthy of a post.

Dear readers, I present to you the camellia. 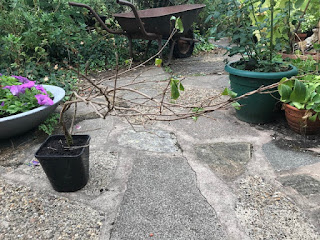 Where I hear you cry?  Where is this camelllia?  All I can see is some half dead twigs in a pot. 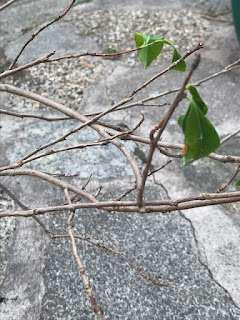 As ever with this meme the cause of the plant's ability to irritate me is that I suspect (know) I am to blame for the problem.  This camellia must be at least eight or possibly nine years old.  It was an early addition to the garden and originally was close to the pond.  It was small when it was planted and seemed happy enough in this spot.  After a year or so it was putting on growth quite well and I started to worry that it would get too large for where I had placed it.

Lesson number 1 - think ahead before planting.

So I dug it up and moved it to the top of the garden.  I thought it would be happy in its new location though I did know that it can get particularly dry in that part of the garden.  It dries faster than other parts of the garden.  Yet, bizarrely knowing this fact, I planted the camellia nonetheless.

It did ok, more or less, once it looked like it had settled in.  It remained resolute in not flowering though and for the life of me I now have no idea what the flower looks like.  I suspect it will be a red one but more than that is lost in the mists of time. 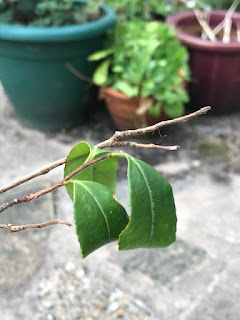 This year has proved a challenge too many for it.  A bit dry is one thing, a full on heatwave and drought is another.  As I was looking at it the other day I realised it was close to death.

So I dug it up and put it in a pot. My reasoning being at worst I am just hastening its demise, but maybe just maybe it can pull through.  I have kept it nicely (not overly) watered and fed it with some liquid seaweed.  It still looks like it is hanging to life by a thread, but I have some hope it might get through this.

I will report back.

Do you have a plant that is not performing as you would like?  Has it flowered to be the wrong colour?  or like my camellia have you just been so cruel to it, it is haunting you with its presence to nag you into being a better gardener? If you want to write your own post and put a link into the comments box that would be great as we can share the pain of our disappointments.
#IPotM camellia Irritating Plant of the Month ukheatwave