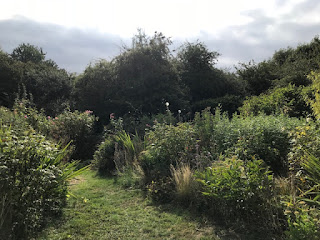 I thought I was going to leave you and then decided I would stay.  This did impact directly on you as I dug some plants up to move with me and these are now mainly returned to you but not all in the places where they started from.  Major disruption does allow for reconsideration and renewal; well that's the line I am taking and I am sticking to it.

I also promised to revamp the front garden, that has been a total fail.  I remain undecided what to do with it and so it remains untouched.  Actually a bit too untouched, it is weed-central at the moment.  I blame the heatwave as it was very difficult to do a lot of strenuous work when it was so hot.  This is a bit of a slim excuse I know and the weather has cooled and still the weeds grow uproariously. It will be an autumn/winter project I am sure, I just need to decide what I want to do.

I have been a bit better at nettle control this year, I always leave some as food for insects, but I have managed to avoid the massive forests of them I had last year.  I have been re-evaluating the Wild Garden for a year or two now and whilst I still like the concept it does need some tweaking (not twerking, that would never do, not even on the Dancing Lawn).

I have kept the veg borders weeded and this has been good.  I did try and grow them as a bit more flowery and veggy borders this time as I really enjoyed growing wedding flowers in them last year.  The drought held them back but they are beginning to look a bit more as I intended now we have had a bit of rain. The raised veg beds though have all had their edges collapse and I need to restore them.

The lawns, despite some recent rain, are still mainly crispy brown from the weeks of drought.  There are some tufts of green returning and I hope that soon they will look reasonable again.  You know I am not a great maintainer of lawns, but even I prefer to see them looking green.

You may be cross with me that during the drought I watered virtually nothing in the ground and focussed on the plants in pots.  I feel sorry that possibly not everything has survived, I am pretty sure the liquidamber and cedar has died.  I am not quite giving up on them yet as I can see new growth appearing on the acer I thought was dead so there is still a tiny fraction of hope.  I still think that you are better for surviving without too much assistance.

My main issue is that there is not a lot of colour in the garden at the moment, it is overwhelmingly green. This is because I did not put a lot of annual planting in as I usually do, plus the effects of the drought have held things back.  So I am intending a late burst of autumnal colour.  Dear garden, expect plant purchases.

I will try and write again before the end of the year.  I will also aim to turn these letters so they are less apologetic and more celebratory of promises completed.