August 16, 2018
Until very recently I would have told you that I am not a huge fan of carnivorous plants.  Like most people I find Venus flytraps quite fascinating, but I have never felt the need to own one.  One of the glories of visiting a lot of plant fairs and particularly visiting such fairs with planty friends is that you often find yourself standing in front of a stall of plants you would not usually expect to stand in front of.  Slowly but surely you start looking more closely at what is in front of you and then it is only a matter of time. 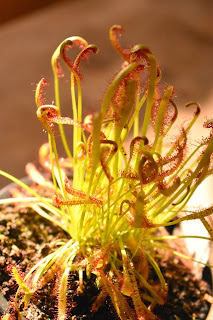 It was therefore not a huge surprise in many ways that a few weeks ago I found myself standing in front of a carnivorous plant stall and found myself saying 'I'll take this one', a rather fine Drosera capensis or 'sundew' plant. 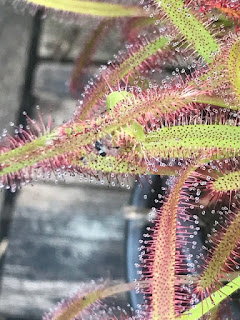 The leaves are covered in these fiendishly beautiful sticky droplets that sparkle in the sun (hence the name).  Insects get stuck in the sticky stuff and then the leaves curl around them.  The rather wonderful name for this movement is 'thigmotropism'.  Slowly but surely the insect is consumed.  I was assured on purchase that the most important thing I needed to remember was not to use tap water but only give it rain water.  I have carefully followed this advice.

At first Barry lived on the windowsill (I have no idea why his name is Barry or why he is a he, sometimes names just happen).  I filled a bottle with rain water from the bottom of the rain-butts and I have kept him duly watered.  After a couple of weeks I decided he ought to go outside to feed more routinely.  I popped him onto the garden table, with a little circle of other plants around him to keep the cats from brushing by, and let him enjoy being in the great outdoors. 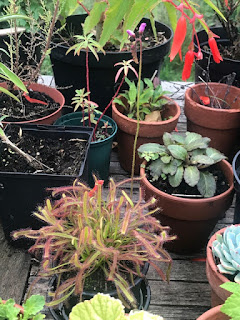 Barry has enjoyed this so much that suddenly and almost over night he shot out a flower spike. 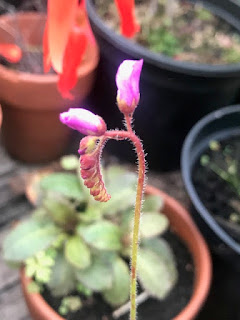 This is rather exciting. 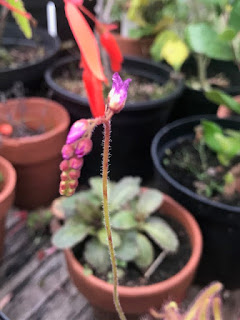 Possibly too exciting.  I think they seed around easily so I feel on the brink of a new adventure.