July 22, 2018
One of the most looked forward to events this year has been the new Belvoir Flower and Garden Festival.  The show is the brain-child and creation of Andy Tudbury of Halcyon Days Garden Events. Belvoir Castle (pronounced beever by the way) is about 40 minutes from home so almost as local as it gets for me.  I am great supporter of local events so it was impossible for me not to want to go. 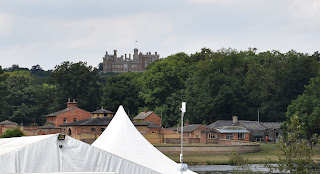 The day dawned as another hot rainless day, in this heatwave of a summer that is partly wonderful to have warm sunny days and equally worrying as we have not had any rain for weeks.  In terms of a day out it means sunscreen and a hat and no need for a coat.  On arrival we were greeted by the piper at the gate, (not the gates of dawn sadly...), which was a magnificent start to the day. 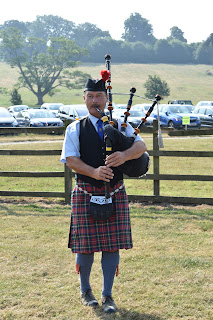 The day was particularly exciting as my good friend Karen Gimson along with David Greaves had designed and built a garden to raise funds and awareness for Rainbows Hospice for children and young people that is based in Loughborough.    I had seen the plans and watched the progress of the four day build on Twitter and Facebook and so seeing it in reality was very exciting. 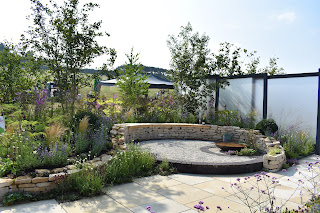 The garden a great success.  It was divided into two areas, the first area being a welcoming, embracing, calm place and the second one of activity and fun for the young people who go to the hospice. 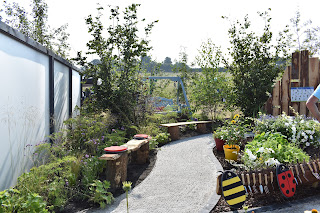 The wooden drumkit was a huge success.  We had our picture taken around it  (We're getting the band back together ......) 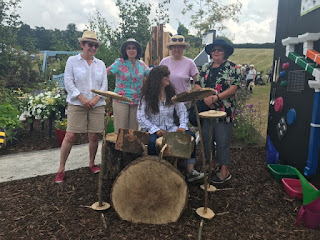 We were all delighted that the garden won best in show. 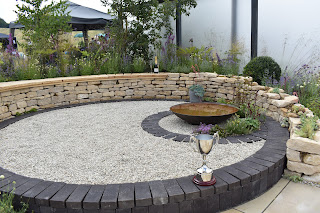 It was truly deserved.  So many companies had kindly donated plants and items to be on the garden that the cost was virtually nil.  The garden has even found a permanent home at Belvoir Castle as the Duchess, who opened the show, loved it so much. 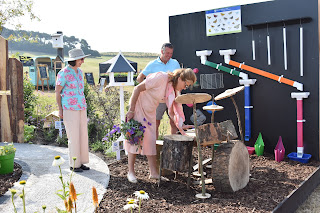 The other show gardens were also of a very high standard. 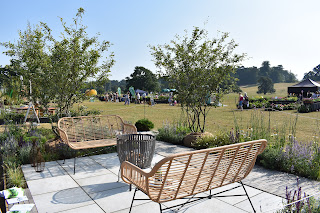 This one highlighted the work of Perennial, the charity that provides support for people who have or  have had a career in horticulture and may need a helping hand through times of difficulty. 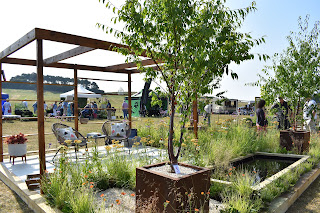 The great thing about show gardens is that they provide inspiration in their parts as well as being a whole.  There is often something that catches me eye. 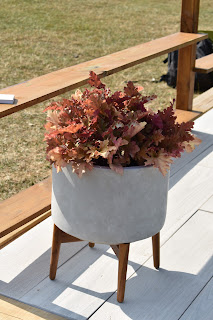 I really want this planter. 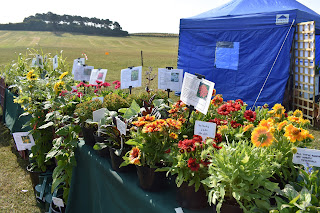 Not only were there the show gardens, there was also some great nursery stalls to visit.  Hardy's Cottage Garden Plants were there (seriously, it is not a plant fair without them!) and lots of other nurseries such as Brooklands, Stannards, Barcham Trees and Coopers Nursery. 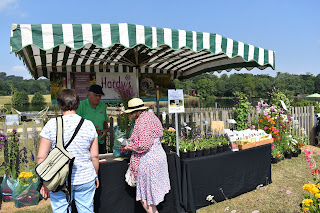 Then there was also the marquee to explore. 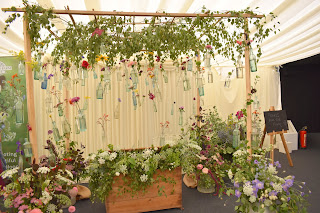 There was a series of speakers to listen to and a Gardeners' Question Time. 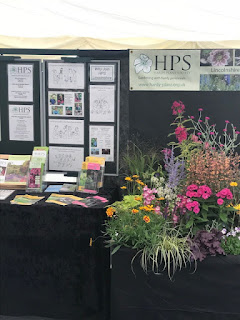 I am always going to bee-line for the Hardy Plant Society stall.  I am a very proud trustee of the society; these stalls are created and staffed by local group volunteers and they are always of such high quality.

After a good walk around all the stalls and various cogitations I might have bought a plant or two..... 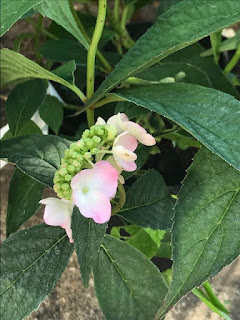 There was this very wonderful hydrangea serrata 'Diadem'.  This is now living in a pot brightening up the Courtyard. 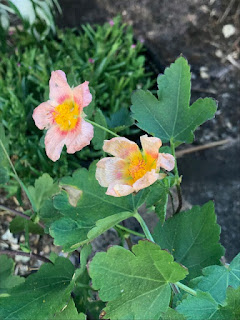 This is Malvastrum lateritian; I am not a huge pale peach fan yet this was irresistible.  This is also now in a terracotta pot and it drapes beautifully over the edge. 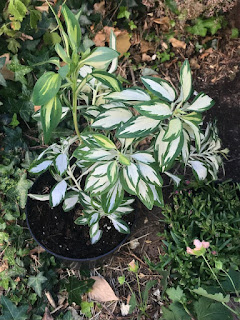 This astroemeria 'rock and roll' also defied my usual dislike of variegation list and had to be bought.  I looked it up and it has bright red flowers.  I am not sure I will like the flowers but time will tell. 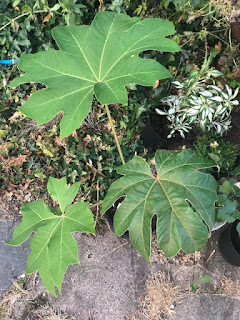 I finally purchased a Tetrapanex rex, I have wanted one for years and years yet never quite committed before.  This time it was a good price and could not be ignored.

Finally there was this plant that proved to be a controversial choice. 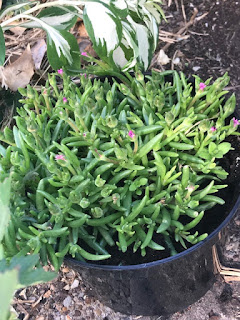 The conversation went something like "I really like this plant, I think it would look great in a terracotta pot" to a wrinkled nose expression and "I am sure it would look nice in your garden....."    So home with me it came and it does indeed look nice in my garden.  (so meh)

We had such a fun day, it was lovely to catch up with friends, had a good wander around and a chat;the ingredients for a proper good day out.  Now I am just hoping that it happens again next year.
Belvoir Castle Belvoir Flower and Garden Festival Hardy Plant Society HPS Karen Gimson Plant Fair Rainbows Hospice show gardens