July 26, 2018
It is now around six weeks since we had any proper rain in Leicester.   Lots of people are saying how it is the longest period of no rain and heat since 1976.  One of my many habits is that I am a long-standing diary-writer.  In 1974 I was given a five year diary for Christmas and 42 years later I am still in the habit of writing something virtually every night.  What I rarely do though is read back through them (unlike Gwendoline, mine is not sensational enough to take on a train).  I wondered if I had mentioned the drought in 1976 so I had a look back.  Gosh it was a window back into the world of being 14 but it was not a window back into what it was like to be in a drought. 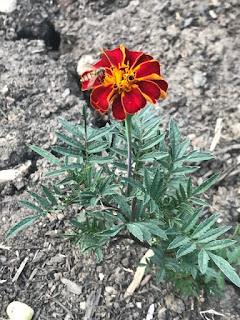 Even so, I remember elements of that summer well.  I remember that Ladybower Reservoir was so low that parts of the villages usually submerged beneath it were partly visible again.  I also remember the plague of ladybirds that descended on the Norfolk coast.  They were everywhere and I remember being bitten by them. 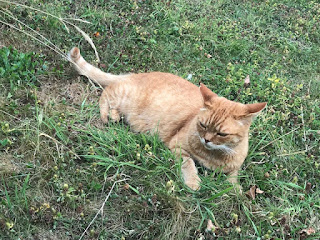 and it was the year that there was a lion on the loose in Tollerton.  Much to our great entertainment at the time  it was never quite decided whether it was really a lion, a big cat/dog or a large brown paper bag.  It was simpler times.....

Anyhoo... at this moment in time the garden is dry, 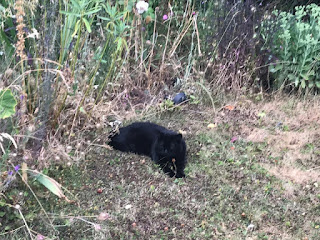 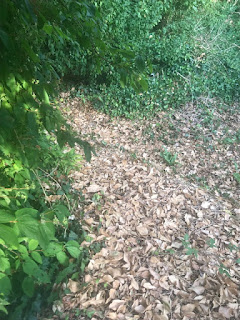 I am worrying about some of the trees and shrubs and every now and again I pour a bucket of water over their roots.  The amount of leaf-fall now makes parts of the garden look quite autumnal.  What I have found quite interesting is that some shrubs lost their leaves and went quite crispy, but have then started to recover without intervention from myself.  It is like they had the initial shock of lack of water but have now regrouped and are coping better with the situation. 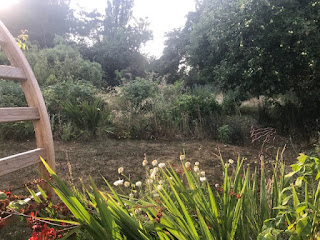 I am not watering the rest of the borders or the lawns and so far the borders look generally ok, but nothing is growing fast or tall. 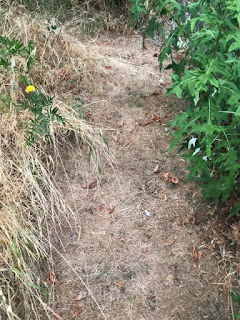 The lawn looks very parched in some parts, 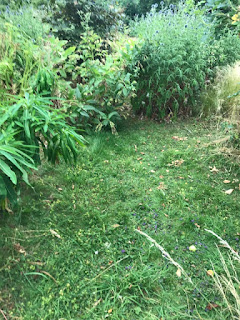 yet there is also this green patch that seems fine. 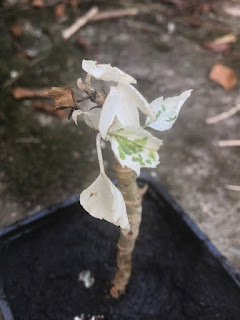 This Fatsia japonica 'Spiders Web' has already featured as being an irritating plant of the month, it annoys me by its very being most of the time.  It has sulked since day one of being planted; even moving it to a shadier position has not suited its mood.  As you can see, it is closer to death than life. So in a fit of pique I have dug it up and put in a pot and into the Courtyard Garden it has gone.  It will either respond and recover or not, time will tell.....

After starting the year very cold and wet, now I just need some good downpours to restore balance.