There have been some plant purchases

June 03, 2018
This year so far is best described as a bit odd.  The weather has not played nicely with us, even though it is having a nice warm spell at the moment.  Things in general have been having the feel of being on a roller-coaster and I am not a fan of roller-coasters.  At times like this I generally turn to plant retail therapy to restore my balance (not my bank balance though..... moving on....)

I might have accidentally bought a few plants online the other day.  I was looking for a Hamamelis aphrodite, I found one and did not buy it (yet), instead I bought: 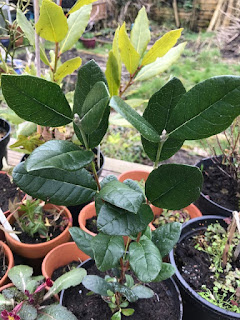 Feijoa sellowiana - the pineapple guava.  It has a pretty flower and I just had to buy it.  I have it in a pot as it is a very young plant and I want to look after it. 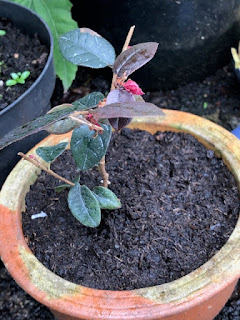 Loropetalum Firedance.  Again, you can see this is very small, but it is very pretty. 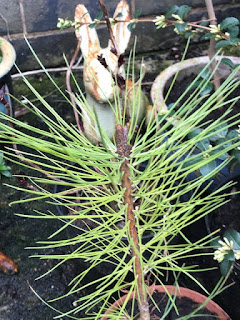 Pinus ponderosa Western Yellow.  I admit I mainly bought this because it was called ponderosa.  Some of you may think that this was the ranch where the Cartwright family lived in the TV series Bonanza, for some of us though this is the name that the Clifton Bridge Inn in Nottingham is known locally as.  Don't ask me why, I really don't know. 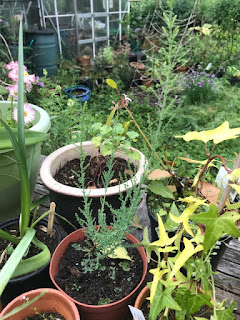 This twig is Tamarisk Pink Cascade.  I have wanted a tamarisk for many years as I love their pink frothy fluffiness of flowers. The main reason I have never bought one before is that I have rarely seem them for sale and, well frankly, I have not known really where I would plant one.  I still actually do not know where this is going to go, but I decided it could live in a pot until I find out.  I should probably also give a general warning that I am liking frothiness a lot at the moment and I have decided that the garden needs more of it. 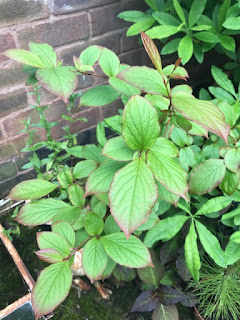 Finally, and on its third attempt at keeping one alive: Stewartia pseudocamellia.  This is a plant I have attempted to grow in the past and yes, I have killed  two of them in the process.  So this is on its last go.  I decided this time that I will keep it in a pot for the foreseeable future and so far so good.  It seems happy.  It is also making me very happy, look at the red edge to those leaves, it is a thing of beauty.