May 02, 2018
What month April has been!  It has been very rainy, this whole year has felt rainy so far and April has been no exception.  We also had some warm days which were very much appreciated, but the last night of April resulted in a frost which was rather a shock to me and to the garden.  I just hope that nothing has been too badly damaged. 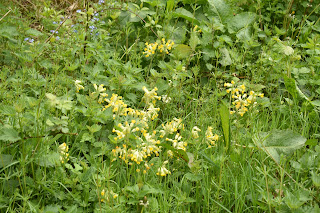 I start in the driveway, where the cowslips I planted a few years ago are now really starting to spread.  This makes me extraordinarily happy.  The soil here is really poor, almost non-existent and yet these beautiful wildflowers are happy to be there. 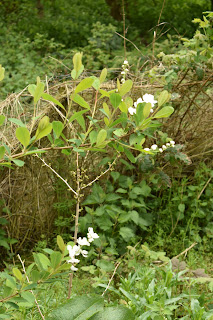 The Exchorda macrantha 'The Bride' has started to flower.  This is a fabulous mid-spring shrub. 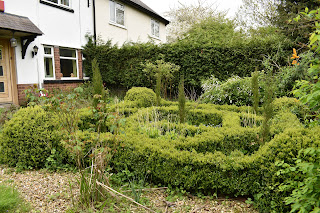 The Knot Garden is looking freshly green. The box is starting to get a bit shaggy and will soon be ready for its first trim (not before Derby Day though). 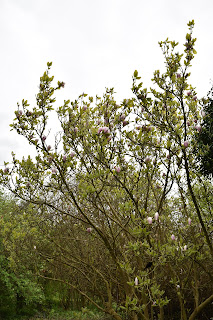 and the magnolia by the front gate is just about finished with its first flush of flowers. 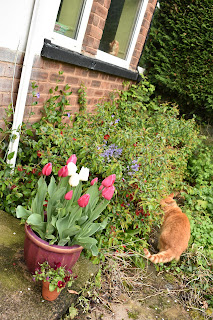 On the doorstep, guarded by Bruce (actually he was sniffing the quince hedge and I would rather not consider why), is a small pot of pansies and these pink and white tulips.  They make a nice welcome home for me when I get in from work. 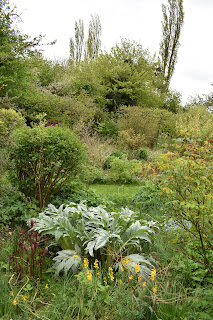 Around to the back garden and there is a lot of lush green.  I always like the glaucus leaves of the cardoon.  They are such good architectural plants, their foliage and flowers are wonderfully dramatic. 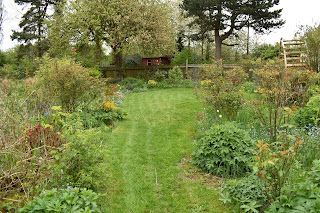 There are splodges of colour along the Long Shoot.  You cannot see the tulips very well but there are quite a lot in flower at the moment. 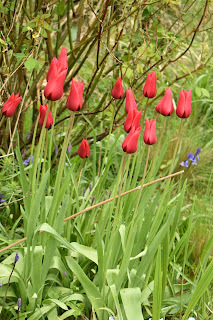 These 'Red Shine' return year on year, they have also spread a bit as I did not plant this many. 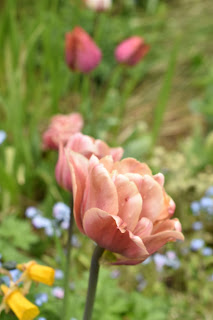 Belle Epoque, planted last year, has also returned, this is a real favourite at the moment. 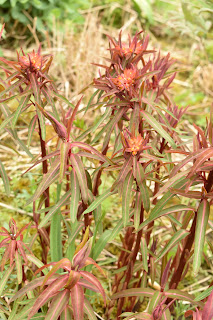 Colour is also coming from the Euphorbia griffithii 'Dixter'. 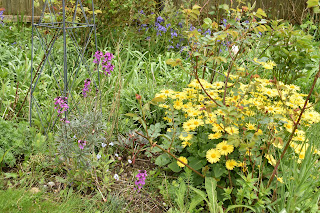 In the Conservatory Border the Doronicums and the Erysimum 'Bowles Mauve' offset the bluebells flowering behind them.  I like this combination very much. 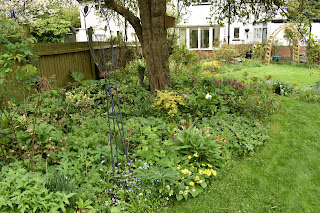 The Spring Border is just starting to go over to green now, the hellebores are still flowering but its peak has now passed. 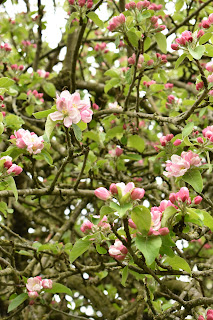 Above it though the Bramley is now in blossom.  Each flower becomes an apple. Well ok, maybe not every one, but it does have a lot of apples every year. 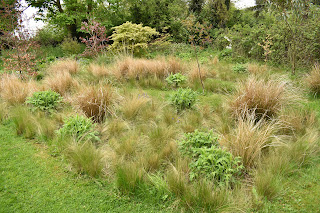 The Prairie Borders are still looking a bit scraggy (technical term) after its Spring cut.  The grasses will soon be filling out again properly and it will look better then. 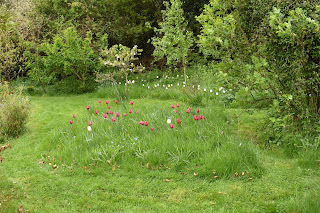 The Dancing Lawn is currently a mosaic of pink tulips with a couple of white ones put in to add a bit of random.  In the background you can see the river of white tulips that run along the muscari stream.  This has worked really well as the tulips have taken over as the muscari finished flowering. 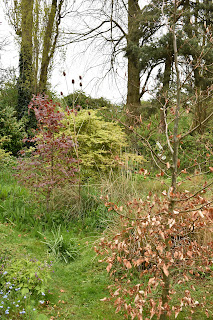 I was interested to see that the beech pillar in the background is further ahead with leafage than the one in the foreground.  I have no idea why, maybe it gets just a moment more sun every day? 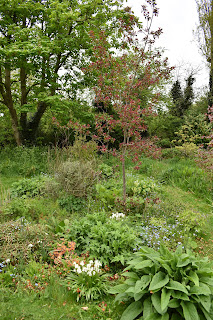 The crabapple 'Rudolph' is starting to blossom in the Woodland Border.  The border is full of primulas at the front and also some white bluebells. 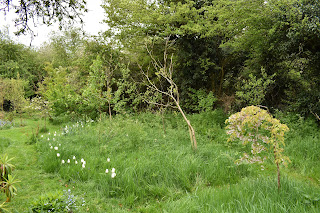 From here I can look back along the Wild Garden, the grass is getting tall quickly this year. 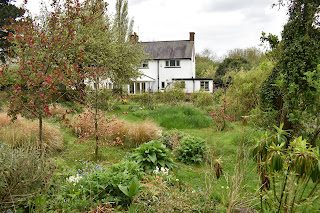 I like the view back towards the house from here. 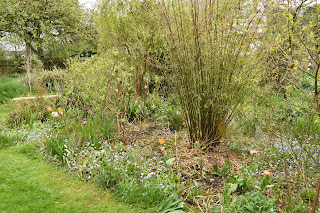 The Exotic Border is not hugely exotic this time of year, 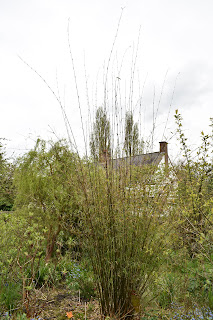 But the bamboo is now quite huge!  It has not spread though, it is not a runner. 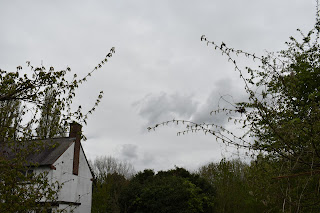 I stood for a while wondering if the pleached hornbeams had reached out to each other to meet yet.  I fetched a ladder but they are not quite there yet.  Just a couple more inches needed. 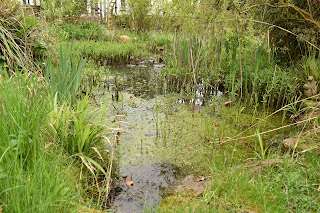 I end, as usual, on the pond.  The water is getting a bit gunky so I need to scoop out the green gunge.  There are many tadpoles in there, which always makes me happy.

My thanks as ever go to Helen for hosting this meme.
End of month review End of month view