May 06, 2018
I know that I start many of my blog posts with 'I was lucky enough to be invited...' and this is because I do regard it as lucky and a privilege to get invited to some of the events I am able to attend.  I was very lucky to be invited to the recent Hillier Nurseries and Garden Centres press day to launch their RHS Chelsea Flower Show exhibit for 2018 'Stihl Inspiration'. 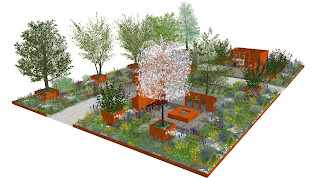 This exhibit is the third one designed by Sarah Eberle.  Let me just put a few facts in here: 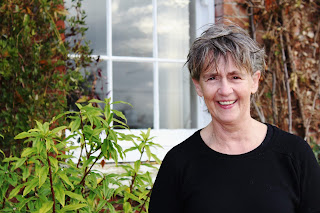 So together Hillier and Sarah make a formidable team.

We were also provided with this table of facts: 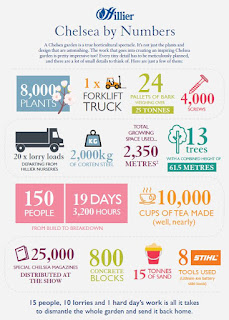 I loved this, I think I liked best that they are fuelled by tea.  I sensed kindred spirits.

This year's exhibit is sponsored by Stihl, a company I have a high opinion of and I have been lucky enough to trial various products for them so I can say with confidence that they make very high quality gardening products for commercial and domestic markets.  Stihl's domestic garden products are now going to be available from Hillier garden centres.

The exhibit itself is designed to be interactive with the public as unusually for a Hillier exhibit, the public will be able to walk through it and get up close to the planting.  Sarah explained it is always a difficult decision whether to keep the public on the outside, which restricts their viewing; or allow a pathway through which allows better viewing but may spoil the photography opportunities.  Now I love a good photograph and we can expect the phantom 'woman in a red coat' syndrome to be prevalent on all our pictures, but what a treat to be able to walk through.

Following on from the official talk, we were taken to the nursery to see some of the many plants needed. 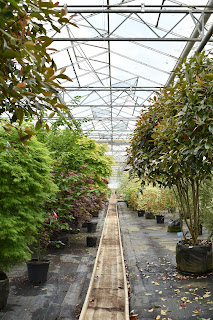 This is only one of the Hillier nursery sites, they are a huge nursery business.  Founded in 1864, they remain a family concern now in their fifth generation.  This was clearly in evidence as George Hillier, Head of Property, spoke to us on the day as did his father, Robert Hillier. 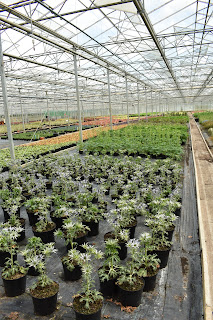 We only went in one of the glasshouses, to have visited them all would have been a day all on its own; they are huge. 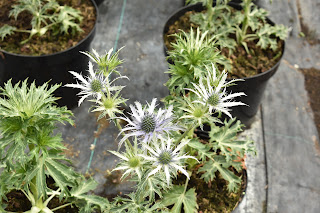 This is Eryngium 'Blue Waves', a new hybrid developed soley by Hillier Nurseries and it will be launched at Chelsea and features in the exhibit. 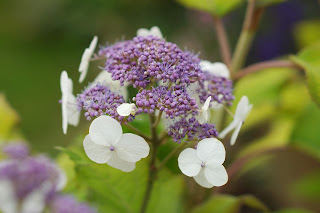 Hillier are launching three plants Chelsea. The above is Hydrangea aspera 'Gold Rush', which is exclusively grown by Hilliers.  You cannot see the foliage well on this photograph, but it is the most amazing pale yellowy/green with a flaming edge of orange. 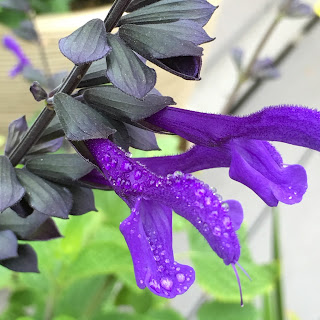 The third plant is Salvia 'Rhythm and Blues', which is a hybrid of Salvia guaranitica. I am looking forward to seeing this used in the exhibit.

Visitors to Hillier's exhibit last year will remember the Memory Tree where they asked visitors to add tags with their garden memories written on them.  This year they have commissioned Kieron Williamson, a fifteen year old professional artist, to create a work inspired by the Stihl Inpiration exhibit.  Kieron has been selling his paintings since the age of six where his first painting sold for £14,000.  Think about that for a moment.  I am very much looking forward to seeing this work.

This year at Chelsea we get two Hillier treats, not only the exhibit, but also an installation that will form part of the entrance into the show.  Sarah Eberle has designed this installed to celebrate the Royal Wedding that takes place the weekend before the show opens.  The installation is not going to be judged so the team have been free to have fun not constrained by the usual judging regulations.  Sarah's excitement as she described this project was clear.  I am really looking forward to seeing this.  The plant colour palette is largely whites and creams but with colour added and royal themed named plants used such as Lavendula Regal Splendour and Cotinus Royal Purple.

After leaving the nursery we were given a tour of the Hillier Gardens by Robert Hillier OBE VHM, son of Sir Harold Hillier the founder of the gardens.  I will write about this shortly.