April 29, 2018
It has been a long grey winter and I seem to have spent quite a bit of time thinking of things I can look forward to.  I saw that Woburn Abbey were putting on a Humphry Repton Study Day to commemorate is work at Woburn.  They chose 21st April to hold the event as it was his 266th birthday.   They could, I suppose, have chosen 24th March as that was the 200th anniversary of his death, but I think choosing the happier event was better.  I thought about whether I should go for a while and decided that it would be a really nice treat to myself so I duly booked. 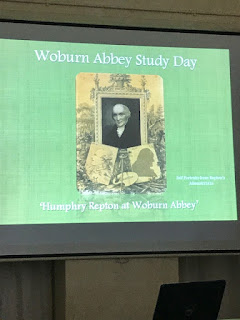 The day was divided nicely into a morning of two lectures from Keir Davidson who has written a book about Repton at Woburn.  The first talk was about Repton himself and his career generally set very much in the social context of the time.  The second talk was about Repton's work for the Dukes of Bedford.  I really enjoyed these talks and learned a lot.  Keir is a very knowledgeable and engaging speaker.  We all sat enthralled. 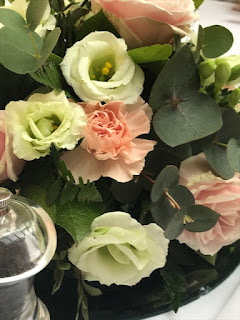 We then went for lunch.  We were joined on our table by Martin Towsey, the Estates Garden manager who was a mine of information about the estates owned by the Bedford family.  What was very clear was that whilst the estates are huge and cover more than one country it really is very much a family concern.  One of the many delights of the day was how many times Martin talked about a plant and said 'this was introduced to this country by one of the Dukes.  On our table were these beautiful flowers, the cream ones (name escapes me, sorry) were one of these introductions.

After a very nice lunch we were then taken on a guided tour of the gardens by Keir and Martin Towsey and the Woburn Head Gardener, Andrew Grout.  This was the most informative and entertaining wander through the grounds. 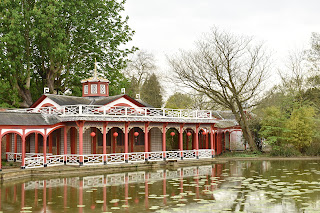 I am going to show you a fraction of what we saw on the day, a fraction, and I still have to go back as there was much that we did not see.  This is the Chinese Dairy, its pre-Repton built in 1787 for the 5th Duke, but the grounds around it were Reptonned (I have checked and this is a verb) (maybe). 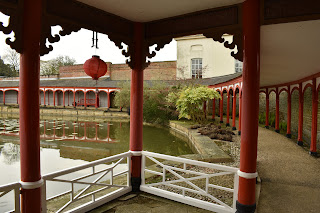 It is very beautiful and we were very lucky to be allowed to go inside. 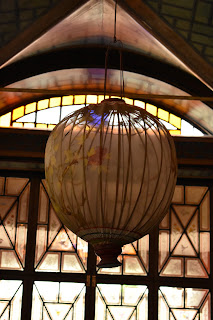 It is lined with marble so it is always a cool environment, just like a real dairy.  There the likeness to a real dairy ends. 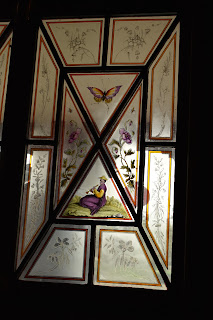 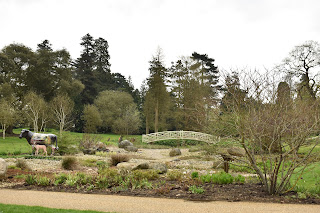 The gardens are full of interesting features, not all from Repton. 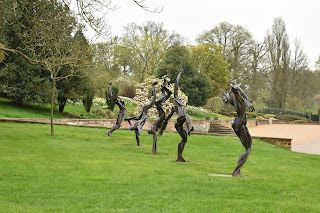 I loved this row of sculptures. 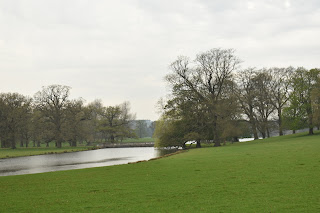 We had to focus though as we were there primarily to admire the changes that Repton had planned.  The important thing about Woburn is that it can boast it is the 'most realised' Repton garden.  Repton himself made the plans and presented them to his clients in his famous 'Red Books'.  The Woburn Red Book is currently on display in the house for the first time.  We went to have a look and it is quite an amazing thing.  Bigger than I expected and so elaborate.  One of the things we knew to look out for from the morning's talks was Repton's belief that the 'perfect' landscape involved concave and  convex curves, that flow together to form an almost 'eye' shape. 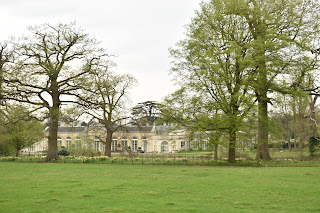 As we walked around Keir kept pointing out to us where the views almost exactly match the plans that Repton created. 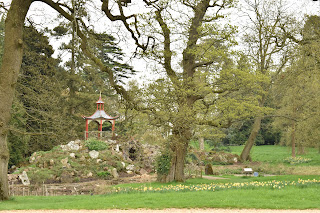 Keir also explained that as Repton only provided the plans, not the workforce and on-site overview that his predecessor Capability Brown did, that many of his plans were not carried out as drawn in the books.  This pagoda on top of a rockery in the plan is overseeing the pond in front of the Chinese Dairy, it is a short walk from the Dairy but now makes a focal point further up the garden. 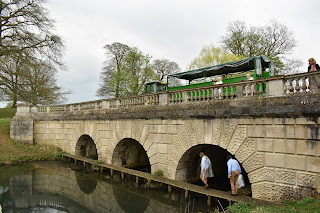 Repton changed the routes into and around the Estate; changing where the roads would lead visitors to so that they would get the best views of the house.  After our walk around the gardens we were taken on a tractor trailer around the garden.  This was huge fun!  This bridge is on one of the main routes in.  We were allowed to go onto it, which is not usually allowed.  The bridge pre-dates Repton and actually is not a bridge.  It is a viaduct, the water level on one side of the bridge is several lower than the other (or higher depending which way you look).  Now I have seen this sort of bridge at other gardens and never realised they were not actually bridges. 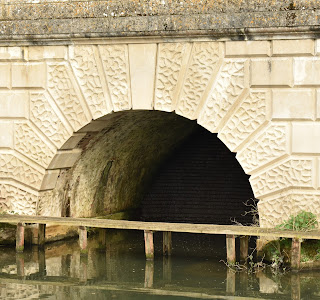 If you look under the arch you can see a waterfall effect which is the water flowing down the to the lower level.  Clever. 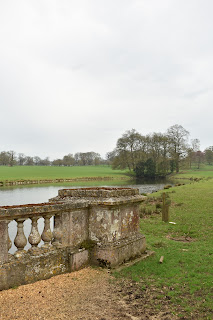 Pre-Repton the bridge had four large pyramid shaped obelisks on these plinths. Apparently there were not well liked by many who saw them and Repton had them removed.  Yet I look and wonder if they were really that bad.... 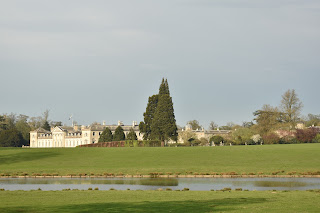 We were allowed to the see the house from parts of the deer park not usually accessed.  This meant we could see how the land changes had created the perfect setting for the house. 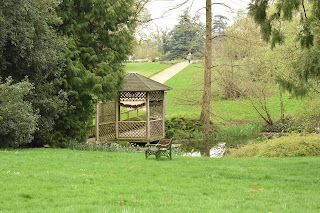 We also went into a Repton feature called the Menagerie.  Here is where the family kept lions and wolves and many fancy birds.  Woburn is famous for its Safari Park, but what was delightful to discover was that keeping wild animals was a generations-old love for the family.  Suddenly the wild animals snapped right into place. 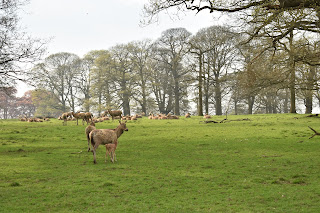 As we travelled around the deer park we saw deer and black squirrels.......... yes, black squirrels. Far too swift for me to photograph sadly.  They originate from the Americas and were brought here by one of the Dukes.  They do not wander far and so they breed here happily and make quite a feature.

Then the tractor took us back to where we had started from where a champagne reception was waiting for us. 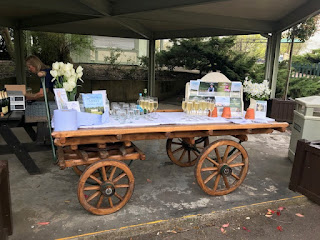 As mentioned at the start it was Repton's birthday so we made a happy birthday toast to him. 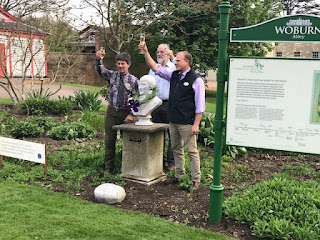 It was all very jolly.  One of the other guests on the day was the great great great great great (not sure how many greats) granddaughter of Humphry himself.  How exciting is that to have a bone-fida direct descendant with us. As Repton shares his birthday with the Queen we raised a glass to say happy birthday to her too. 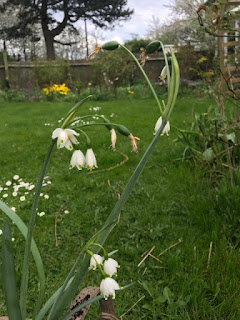 and I bought a plant, Leucojum gravetye giant, a perfect memento of a very special day.  I have to give a huge thank you to all involved.  I had wanted to treat myself when I bought my ticket and what a treat it turned out to be.
black squirrel Humphry Repton Leucojum Woburn Abbey