A Sunday morning break in the weather

February 11, 2018
This winter feels like it has been colder than recent years.  We seem to have had more constant cold, more frost and more sleet and snow.  This has made getting out in the garden difficult particularly as it seems to have rained at weekends quite a lot.  As I generally only have weekends to get my garden time in, this has been a frustrating start to the year.

This Sunday morning the sun shone. Saturday had been rainy and squally winds so I did not expect too much from the garden.  It is very muddy in places and I try and keep off the borders when it is like this.  I had some snowdrops I had recently purchased that I wanted to get planted, but I had not really expected to do much else.

Yet the sun was shining despite the bitterly cold breeze and I had not spent quality time in the garden for a couple of weeks.  I stood outside the greenhouse looking for that job that needed doing that I could usefully achieve. 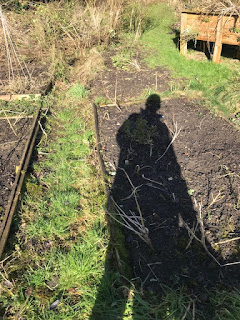 The veg beds called to me, they are easy to weed in this sort of soggy weather as I do not need to walk on them.  Every year I say I will look after them better, every year I say I will weed them more regularly and yet this resolution rarely holds.  Last year they were mainly used for growing the flowers for my daughter's wedding which did mean they did get weeded more frequently than usual.  This year I remain undecided what I am going to grow in them.  I enjoyed the randomness of flowers and some vegetables in this area last year so it is likely I might do something similar again.

The sun continued to shine and I imagined that I feel a tiny bit of heat from it, just a glimmer.  I think it was probably around 50 on the Scoville scale which was enough to raise a smile and a hope that soon spring will be here. 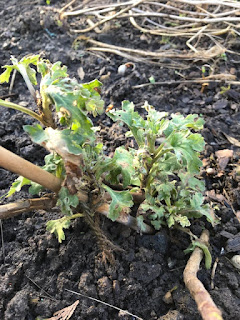 There were joys to be found in the vegetable beds.  This chrysanthemum has been frozen and snowed on and yet still showed signs of life.  I am hopeful it might now flower for another year.  This persistence of life when not expected in plants is always a joy.   I just hope that some of the dahlias also left to fend for themselves over the winter have also hung on to enough vital spark to regrow. 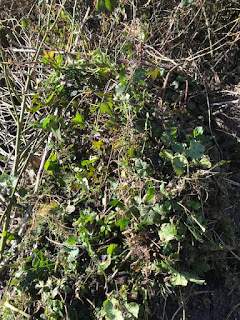 the pile of weeds grew larger.  This is always a happy sight.  The weeds are currently a heady mix of valerian, willow herb, herb robert, wood avens and dandelions. 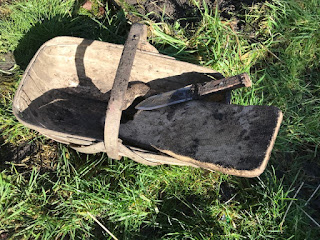 After a merry hour of weed removal; my trusty trug, hori-hori and kneeling pad had got nicely muddy and the borders were looking much better.  Just as I decided it must be time for lunch..... 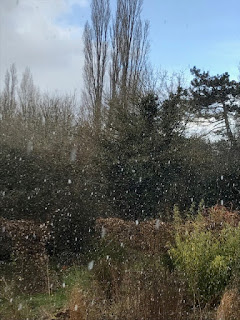 .....it started to hail.  The afternoon swung from sun to snow to hail to snow to sun, the gardening time was officially over, but I had managed sometime outside so all was good.  Now to hope that next weekend sees some good weather so I can achieve some more garden time.