December 31, 2017
Suddenly it is not only December, but the end of December.  Time moves in strange ways at the best of times, but in December it speeds up the closer you get to Christmas and then it elongates in the week between Christmas and New Year.  As a month this makes it hard to keep track of.  This December has also had rather a lot of weather.  There have been sunny days and cold days, rainy days and snowy days.  As I write this at the end of the month it is also rather breezy.

I have managed to spend quite a bit of time in the garden in recent days which always makes me feel happy.  There has been some weeding and some tidying.  Not too much tidying though as we are not through the coldest of the winter yet and I like to leave detritus to protect the spring growth.  There are, of course, exceptions... 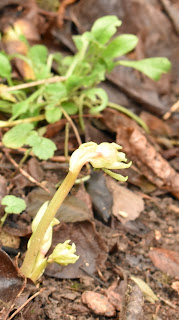 This pale, light-starved hellebore was under a covering of fallen magnolia leaves in the front garden.  I find magnolia leaves need clearing up or they smother everything underneath.  They seem just that bit thicker and that bit larger than many other leaves and so nature needs a hand. 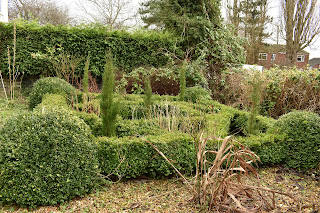 I was also pleased to see in the front garden that the cypress trees planted a couple of years ago are now getting fairly tall.  They seem to have put on quite a bit of growth this year, they were barely visible about the box hedging this time last year. 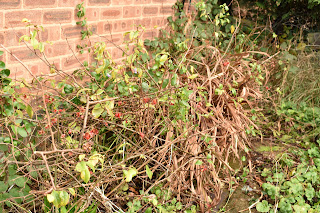 The quince hedge is flowering quite well and I think quite early at the moment.  It gets cut now as a hedge and this has encouraged it to hedge-up well. 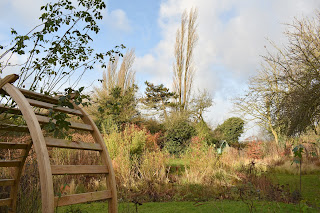 Walking around to the back garden and the garden is still half-covered by shade.  It is very wet under-foot after much rain and melting snow. 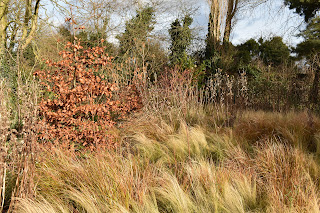 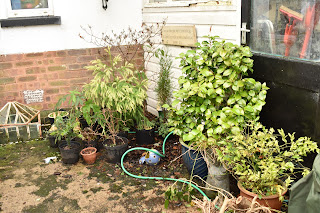 The Courtyard is looking a little depleted at the moment.  Some of its previous occupants are now planted in the garden as it does act as a nursery point for some small shrubs.  I let them get some growth before I put them out into the garden. 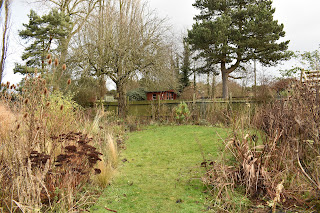 The Long Shoot looks wet and the borders on either side look generally brown and wintery.  They will get cut back at some point, but this does not usually happen until closer to spring. 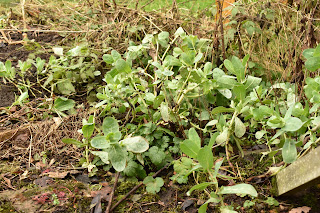 There are signs of growth.  These self-seeded cerinthe are just by the vegetable borders.  I am not sure how they came to be there, I suspect I must have dropped some seeds there.  I am not going to weed them out though as I do like a bit of random in the garden. 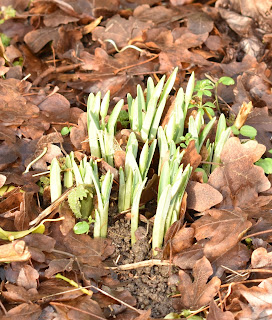 Snowdrops are on their way up. 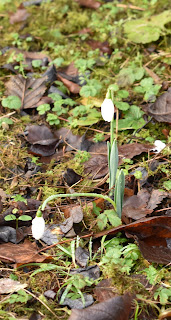 These are actually flowering, these two are always early, I suspect they are Mrs McNamara. 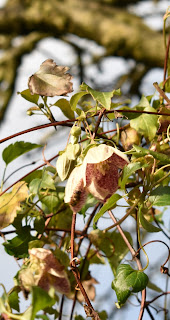 The clematis cirrhosa is flowering, and if you peer very carefully you can see an out of focus bee on the edge of one of the flowers. 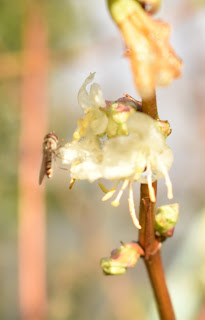 I was also delighted to see this hover-fly resting on the winter honeysuckle.  It is always a joy on mild winter days to see the insects emerge. 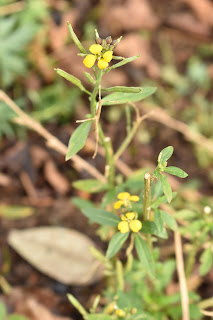 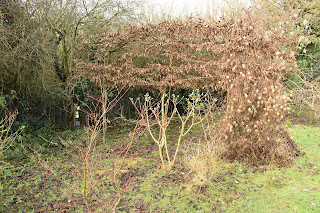 The Four Sisters enjoy their slightly sheltered part of the garden; 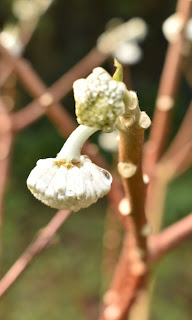 the edgeworthia is covered in buds this year and I am anxiously watching it in the hope that it gets through the winter ok.  This winter has started quite hard and cold so I just hope that the edgeworthia is mature enough now to survive a cold one.  We have not had a truly hard winter for a good seven years and I would hate to lose the edgeworthia. 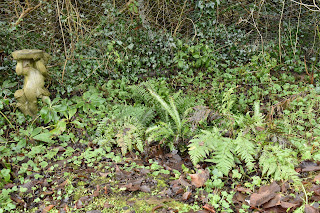 The fernery stays delightfully green over the winter.  The ferns are getting quite big now. 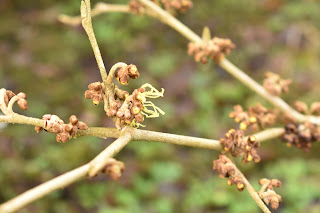 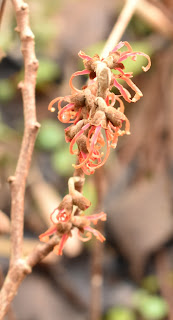 and two of the hamamelis are in flower.  These are the oldest two and they always flower early. I realise this makes it sound like I have a small forest of hamamelis, I have four, one in the front garden and three in the back. 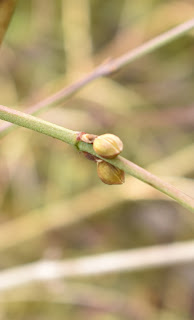 The Cornus mas is budding up well, 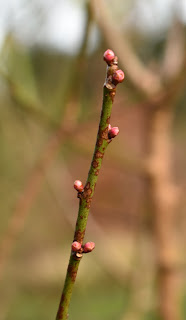 as is Prunus Ben Chidori.  I think I treasure early spring flowering shrubs above all others, they give much needed colour, often great scent, and quite frankly they are signs of hope that spring is returning. 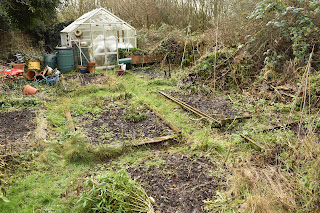 The vegetable borders look like they've been abandoned.  The edges of raised beds have now mainly collapsed and I need to replace them.  I am in that 'standing and staring in despair' phase at the moment with them.  I will motivate myself into action at some point as yet unidentified. 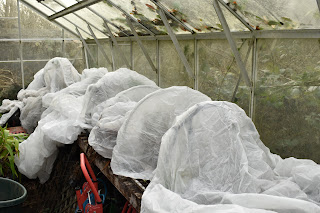 Meanwhile in the greenhouse Miss Havisham has been visiting and all is snug and cosy. 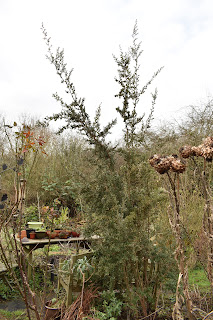 I rarely seem to show the tea-tree, which is now getting rather tall.  I gently prune it to keep it fairly columnar and it seems to respond to this well.  It was an early planting in the garden and was barely a twig at the time.  I worry it might get too large but for now it is ok.  If it does get too large then it will have to come out, but that is just an opportunity to plant something new should that occur. 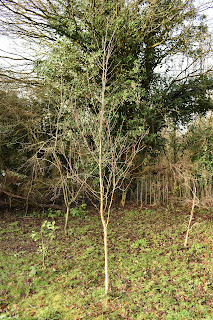 I was also pleased to notice that the Silver Birch is getting increasingly silver.  It is now forming a nice sized tree.  It has many years to go before it gets to maturity and again, it may get too large for the space, but for now it makes me very happy. 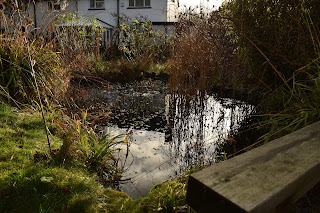 I end as every on the pond, that looks dark and deep in the winter light.  I spend delightful moments sitting on the bench, drinking tea and looking into the depths of the pond.

I want to wish you all a happy new year and I hope that 2018 brings you and your gardens every happiness.

Thanks to Steve for hosting this meme.
End of month review End of month view Knot garden quince hedge