Is this the end of the road?

November 12, 2017
The weather has now taken a chilly turn and we have had a couple of good frosts.  Nothing too cold really as yet, but enough to convince some of the summer flowers that they have reached the end of the road. 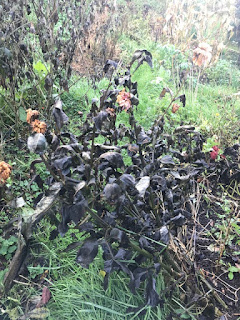 The dahlias were not keen on the first frost of the season, but braved it out for a little bit longer.  The second frost confirmed their dislike of cold and they went into shut-down.  I can remember when I first started growing dahlias; I knew that they should be lifted when they had been blackened by frost, but I wondered if I would know when they had been.  Once you have seen what frosted dahlias look like then you are left in no doubt. 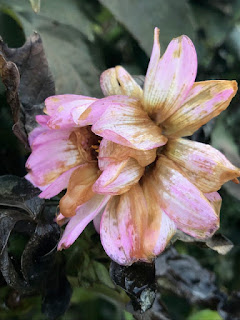 Their once glorious flowers now look browned and sad. 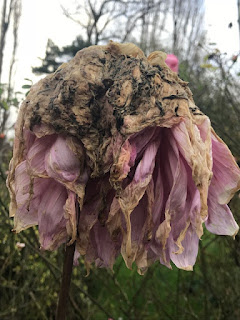 This one looks like the Gravy-Fairy has ladelled it.  I do not routinely lift dahlias any more, I let fate decide whether they survive or not and many do come through.  This year I grew more than usual so I decided I would lift some of them.  They are currently sitting upside down in a crate so their stems can dry before I pack them up for the winter.  There will be much keeping of fingers crossed hoping that they revive in the spring. 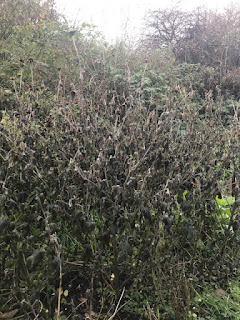 The cold does not only upset the dahlias, the crop of tithonia also decided to up and die from the frost.  I grew them in one of the raised vegetable beds this year and they responded really well.  I think the well-rotted manure helped them grow to a good size and flower for an extended period.  This has made me consider about improving the soil more in my flower borders as the difference in growth has been astounding. 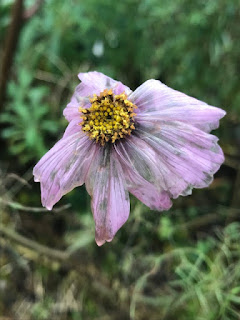 The cosmos has become frost-translucent. 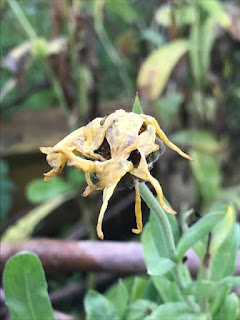 and the marigolds are also struggling to keep going. 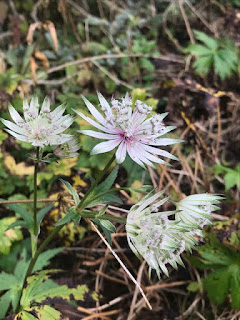 Amid all this dying back, not all the summer flowers are ready to give up just yet.  The astrantia are tough as old boots and enjoying a late second flush.  They will die back eventually but this reminder of summer is welcome whilst it lasts.
astrantia dahlias tithonia