A Moment of Autumn Sun

November 05, 2017
The past week feels like it has been very grey and cloudy.  We are now properly in autumn and the days get shorter one after another.  A couple of minutes later at the start of the day and a couple of minutes earlier at the end all add up to fewer and fewer precious daylight hours.  The frosts are on the doorstep, it feels like the frost is hesitating but unlike vampires it needs no invitation before it starts to make its presence properly known. 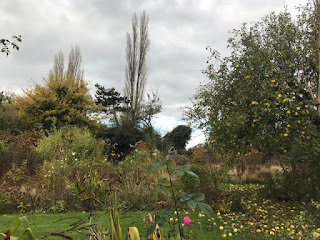 The other day began with heavy rain.  The rains started late the night before and was still going when the day commenced.  It felt like it might be set in but the forecast promised it would be gone by afternoon.

The forecast was right and by lunchtime it was possible for a chilly wander around the garden.  It was still very grey and the sound of rain dripping from the trees and plants surrounded me.   It felt like I could hear the drips of rain being absorbed into the ground; filtering through the lawns and borders,  being pulled towards the roots beneath. 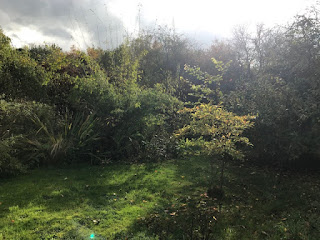 The sky remained grey until suddenly the cloud moved enough and the sun pushed through.  Immediately the whole aspect of the garden changed.  Suddenly there were sparkles and glints, 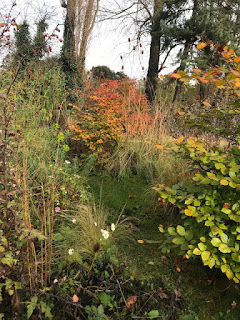 the autumn colours started to shine, 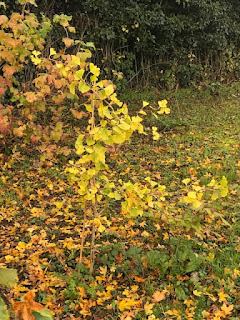 and the garden began to look more golden.  It seems that in autumn the greens can no longer sustain their freshness.  It has aged and worn dull.  Before the colour finally drains (I want to say fades to grey, I really want to say this, but I shall resist and just carry it as an earworm for the next few days.) 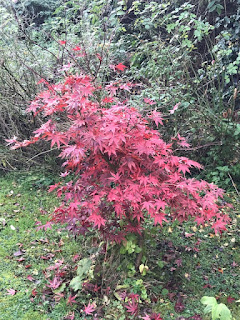 The Carol Klein acer, that last year suffered badly from wind-burn, is turning its autumn red and loving the late moment of sun.  That this tree had a bad year and now has had a good year is a good example of how gardening changes from year to year.  Previously this tree had not suffered from wind burn so it must have been that last year we had some winds from a different direction that just caught it wrongly.  I love this acer, which now it has settled in the garden seems to be maturing well (wind-direction allowing). 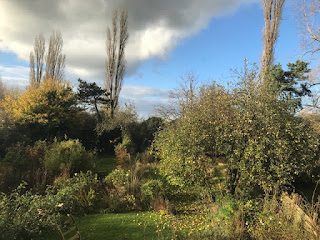 The blue sky  pushed the grey back and the garden revelled in a brief sunny moment.  It was not the sunniest of days but just seeing this patch of blue made the whole day seem better.  It was too wet to do any meaningful gardening, but my wander gave me my garden-fix.  I know I've mentioned rule #32 before, a rule that matters ordinarily and even more so through the dark months, it is vital we enjoy the little things.
autumn autumn sun rule #32