A letter to the garden, a year on

It has been a year since I last wrote to you and whilst I note you did not give me the courtesy of a reply; I feel that I should have not waited quite so long before contacting you again.

When I wrote to you last year I was feeling guilty for neglecting you, I felt I had not kept on top of the weeding as well as I should have done and generally I garden-shamed myself.  Oh dear, dear garden, oh dear dear dear.  What can I say?  I cannot say I have kept my promise as I look around and see as many weeds and nettles as before.  The vegetable borders have been cleared, I say that with a spark of hope that I might gain some credit for that? 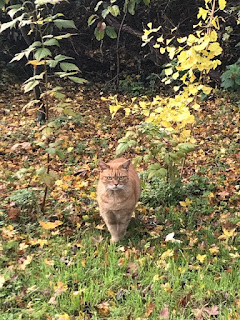 The front garden needs serious attention, the lavender edges are weedfilled and straggly.  I gave them a serious trim with the hedgetrimmers the other day.  I cut into the old wood in that way you are not supposed to in the vain hope that they will either recover well or just die.  I think I need to replace it if truth be known and that raises some interesting questions.  Should I replace it the same or move on and have something new?  Maybe something new is in the air and I should ring the changes?  I shall have to ponder some more on this.

The back garden is still nettle-heaven, especially in the sidelines of the vegetable garden.  They managed to suddenly become unmanageable.  Next year I will try and do better.  There are thankfully other parts of the borders I am now happier with than last year.   I think the Pond Border and the Conservatory Borders both worked well this year.  The Coal Bunker Border is passable, it still needs a bit of work but it has had some good new additions in the last year, in particular the Heptacodium miconiodes, a name that I can never remember but a great shrub nonetheless.  It filled a gap rather well and also made me think more about what surrounded it which I think is the sign of a good planting choice.

So I feel a little more positive about how the year has gone, but as ever I feel guilty that I have not looked after you well enough especially in this your tenth anniversary year.  So here are my promises* to you for the next twelve months:

1.  I shall try and write to you more often
2.  I shall revamp the front garden
3.  I shall make more effort to keep on top of the nettles (not physically, that would sting to much).


* promises - like pie crust, are made to be broken #justsaying