September 28, 2017
This year I have planted fewer vegetables than usual.  Partly because I have been growing flowers for my daughter's wedding but also because, well, I was just bored of growing veg.  I am not very dedicated at growing veg and my lack of caring leads to a poor crop more often than not.  So this year I decided to only grow what I really wanted.  I have not grown any potatoes for the first time in so many years I cannot count and what I have missed in having fresh new potatoes I have gained in space. 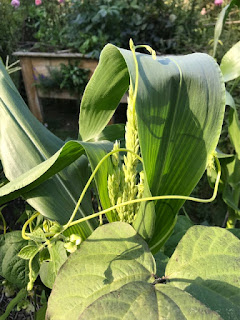 I decided to grow courgettes as I use them in cooking a lot.  I also wanted runner and french beans, peas and some sweet corn.  I sowed some seeds and also bought some as plug plants.  I grew few of each as I did not want to get bored of them. 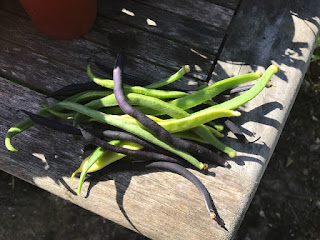 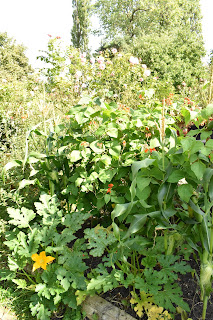 The results have been wonderful.  Firstly I have had a nice steady crop of beans and courgettes.  I am very enamored of these yellow courgettes, they have great flavour and are rather well behaved in the glut department. 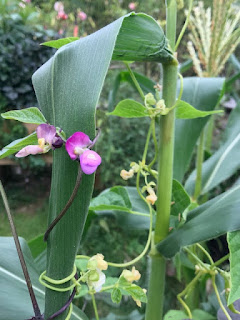 The purple beans and yellow beans have also been a revelation, especially the yellow beans which are just wonderful when eaten when small and tender. 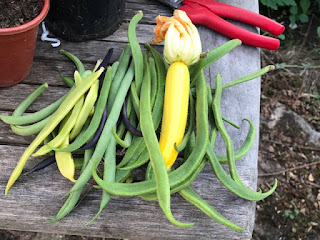 The sweetcorn ripened last, and has also been successful this year.  I am really enjoying have fresh sweetcorn on tap.  The fact that it ripens so late in the season means that the veg season has been a long one. 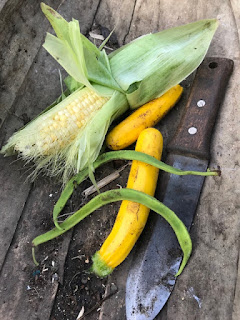 Best of all I have enjoyed growing veg this year.  I have kept it weeded and looked after it.  It has looked a bit chaotic at times and in the recent strong winds the beans did collapse a bit, but I care not.  I think growing veg in this way is far more satisfying than strict rows and I shall do it again next year.  It turns out it is not veg growing in itself that is boring, it was just the way I was growing it.
GYO Three sisters vegetable gardening