August 20, 2017
Earlier this week I had to say goodbye to Austin, who was the eldest of my four cats.  Austin, named after Austin Powers by my children, has always been a challenging cat.  Nothing has been ordinary about the eighteen years of her life. 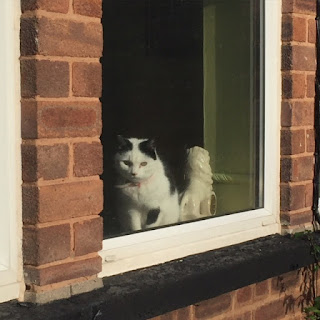 Austin was dumped in a plastic bag with her brother Lawrence in a local Safeway car park.  I had been thinking of getting another kitten at that time so when I heard about the dumped litter I went along to the local cattery to choose a kitten.  One kitten, singular.  My children came with me and we quickly chose Lawrence as we wanted a black cat.  This would have left a splodgy kitten on its own, so home with us she came, the wonderful Austin.  We were told they were both male, subsequently we discovered that Austin was in fact a she, but we never changed her name as it suited her so.  For years we always referred to them as 'the kittens' until it became apparent that they had really grown beyond that point.

So the children grew up with Austin, Lawrence and the indomitable Geoffrey.  Austin loved Geoffrey even though he treated her rather meanly.  When I moved to Leicester she had a brief crush on a cat that moved in with us at that time called Matt.  This was short-lived as he cared not a jot for her, so she decided to scorn him and returned to her first love, Geoffrey. 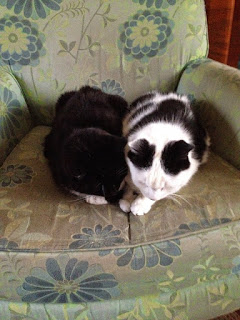 Austin hated moving to Leicester, she hated the house we first lived in when we arrived here and refused to come into the house.  Even when she did come into the house she hid extremely well so that the only sign I knew she was in the house was that food kept going and the cat litter was being used.  Austin was always a good hider.  Austin was always a very good judge of character, a really good judge.  Part of why she hated the move the Leicester so much was the reason why we moved.  Once that reason was no more she settled better but still thought I was a bad person for not listening to her in the first place.

When I moved to this current house Austin was a little happier.  When my son moved here she was over the moon.  Austin loved my son very much, nearly as much as she hated me for moving her to Leicester.  After a couple of years when my son moved out she decided she had to put up with me as I was the best she had left.  Austin never practised flattery and had in practice sulked for nearly seven of her then fourteen years of life.  I am not sure if she could remember why she was so cross with me, but this is a cat that could hold a grudge. 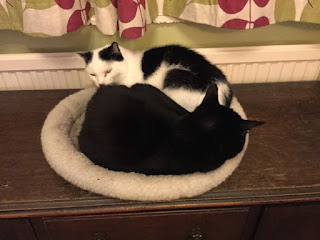 Time moved on and a few years ago Geoffrey died.  I worried hugely that Austin would not cope but after a brief period of unsettlement she seemed fine.  A couple of years later though and Lawrence died and Austin plunged into despair.  I have never seen a cat grieve before.  She used to cry in the middle the of  the night, it was heartbreaking.  She never really recovered.  She got more and more fragile, dementia set in and her kidneys and thyroid started to stop functioning well.  The more unwell she became the more she began to rely on me and want to be near me.  She became pretty much a house cat, rarely setting paw outdoors and stayed almost always on the sofa.

Things did not improve, earlier this year I went away for a few days and when I returned she had forgotten me completely.  She was actually terrified when she saw me, it was incredibly upsetting.  Then last week after years of not really going outside at all, she started going outside.  This really worried me, it was such a change in behaviour, I thought that this was a bad sign and indeed it was.  What has surprised me most was how badly Bruce, Esme and Flossy have taken her loss.  I thought they would hardly notice as they never really bothered with her at all.  Austin held court in the lounge and she did not really allow the others in there.  They have been upset all week and clearly miss her hugely as do I, the sofa is suddenly too big without her. 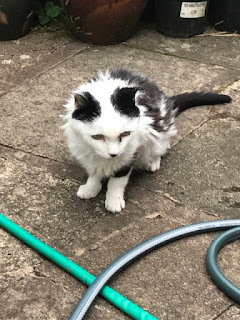 So farewell Austin, the last of the cats that my children grew up with, the last of my cats that connect me back to the city of my birth.  It is indeed the end of an era, the Austinian epoch is over.