July 01, 2017
If we are at the end of June, we are half way through already.  The summer solstice has been and gone and the year is on the turn.  The weather has been in turns a bit rainy and scorchingly hot. 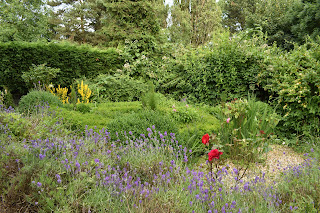 Starting in the front garden, the Knot Garden is looking quite good, but the lavender edge is in rather a state.  Weeds have taken a hold, ground elder and wood avens (the bane of my gardening life!) are everywhere.  The lavender is quite old now and I am seriously considering digging it all out and replanting.  Watch this space. 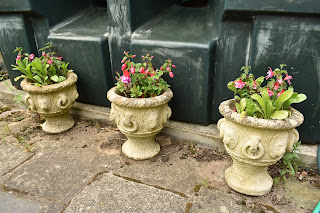 Through to the back garden and the three planters that hide the oil tank are sporting fuchsias this year. 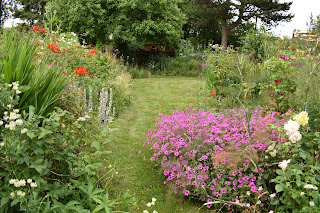 The borders that frame the formal lawn are looking full and blousy.  They seem to have come together rather well this year and I am pleased. 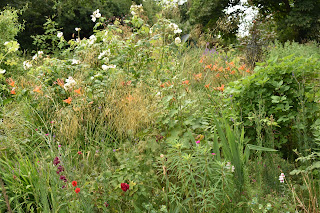 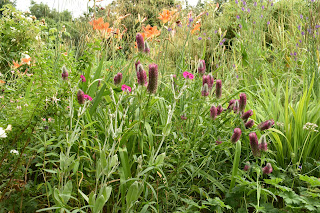 and this Trifolium rubens which has been in the garden for many years has suddenly decided to take its moment to shine. 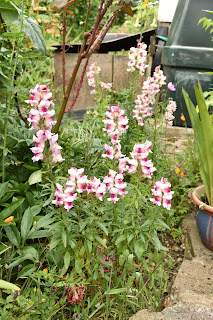 These snap dragons in the Coal Bunker Border have been great this year.  They were grown from seed last year and have been magnificent; 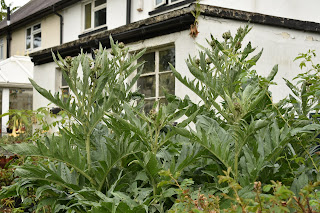 and the cardoon, that was one of the first plants to be planted in the garden, is gearing up to flower which is always much to the delight of the local bees. 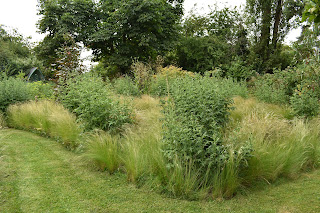 The Prairie Borders have nearly returned to full growth after their spring hair cut.  They waft well in the breeze again. 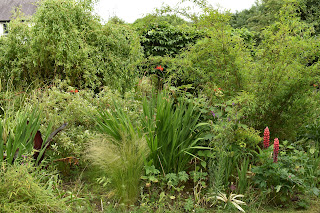 The Exotic Border does not look hugely exotic just yet, but I live in hope. 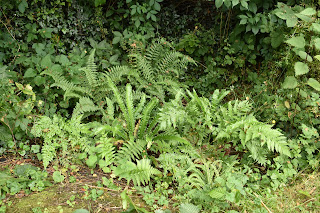 The ferns in the Fernery are really doing well this year.  They are putting on lots of growth and they have not seemed to mind the recent heat too much at all. 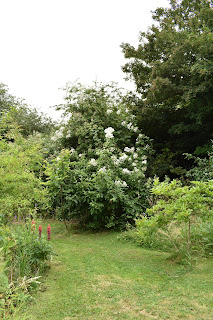 This view along the Dancing Lawn shows the magnificent Kiftsgate rose, which is swamping the medlar a little but it is flowering so well I forgive it.  I planted it some years ago in the hope that it would romp around the boundary hedge and create some natural barbed wire.  It is fulfilling this aim. 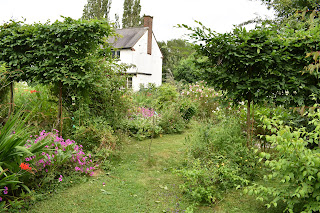 Since the removal (collapse) of the pergola, the pleached hedges now include a 'Mindthe' this is an ancient term that when used in its full context reads as 'mind the gap'.  There is a young sapling barely distinguishable in the middle of the gap and I am encouraging some of the highest branches to grow across and meet. 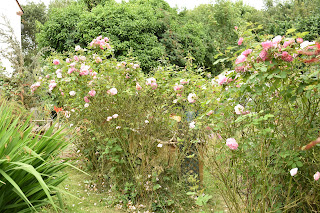 The Hyde Hall rose hedge is flowering really well this year.  I am even using hedge trimmers now to try and keep it in shape.  I still bless the day I failed to grow a yew hedge here, the roses are so much more cheerful. 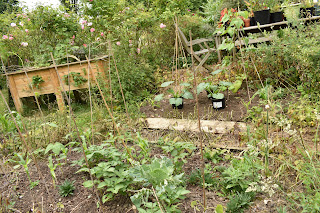 In the veg borders, which are mainly given over to wedding flowers this year, the beans, sweetcorn and courgettes are coming on quite well. 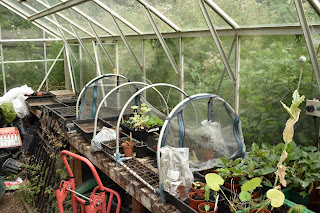 The greenhouse is starting to look more empty of plants.  There are a couple of stragglers left in there now, but not for much longer. 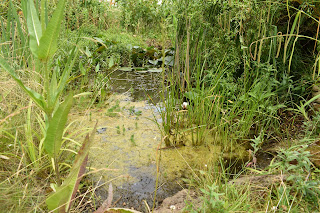 I end as ever on the pond.  That is looking a little gunky, but it is doing ok this year.  It is not too low yet despite the heat.

Thanks as ever to Helen for originating this meme.
Dancing Lawn End of month review End of month view fernery Prairie borders