July 13, 2017
It will not have escaped regular readers or my followers on Twitter/instragram that I am rather fond of roses.  I have quite a few in the garden and if I had the space I would have even more.  As a proud member of the Garden Media Guild when I saw they were organising a trip to David Austin Roses I knew I had find the time to go along.  I have briefly visited David Austin's Albrighton nursery a couple of years ago, but the temptation of a behind the scenes visit was just too good to resist. 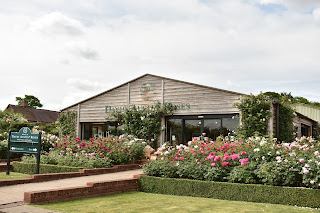 We were greeted by Jo Bird from the nursery and the Head Rosarian (such a great title) Michael Marriott.  Michael gave us a potted history of how David Austin became a rose developer and of the nursery itself.  It was, as most histories are, really interesting and one that reminds you of those things you had not realised you had sort of forgotten.  Before David Austin, the roses you could buy for your gardens in the UK were generally Hybrid Tea Roses.  They repeat flowered but they often had little scent and generally could suffer from disease.  The 1950s/60s was a time when using chemicals to control garden pests/diseases was the thing to do, despite most if not all of these chemicals now being known to be more harmful to the environment and to people than most of us would now wish to risk.  (I am just going to mention here the seminal book by Rachel Carson, Silent Spring, it remains as important now as it was when it was written).  David wanted to develop a disease resistant, scented, repeat flowering rose that looked like an old rose.  His first introduction was 'Constance Spry' in the early 1960s.  It took another twenty years before his ideas really began to catch the public's eye.  The Graham Thomas rose in particular in the early 1980s was a break-through.  They now grow around 2 to 3 million roses a year all over the world and the business is still sited in what was David's grandfather's farm.  The company remains a family concern, David Austin is now 91 and three generations work for the company. 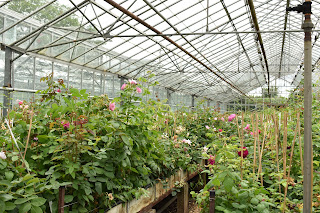 We were shown around the greenhouses, which were packed full of seedlings and growing on roses waiting to see if they would be selected to actually become a sellable rose.  They produce around 120,000 seedlings a year.  Apparently roses are very easy to cross pollinate, but of course many do not make the grade. 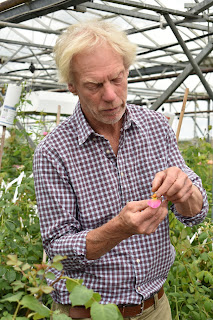 This is Michael explaining the process to us.  Out of the 120,000 seedlings possibly only eight, yes eight, will get through to sales.  They sow the seeds in September, they will flower the following April (they are forced a little to flower early) and then if they seem worthwhile in year two they are planted into the field. 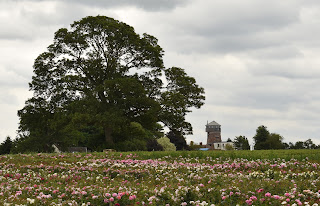 The field is the school of hard knocks.  The soil is poor and sandy, not what roses like ideally.  They hope that every disease and pest will come at them in the field so they can see how they handle them.  It take around ten years from that first seedling to actually being sold.  It was completely fascinating.  When asked what makes a good David Austin rose the simple answer was, one we like the look of. 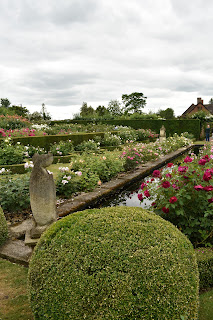 We were then let loose into the gardens, that are set out in different styles to show the roses to their best aspect.  There are formal rose garden areas and also areas where roses are planted within perennials in a more relaxed cottage-garden type way. 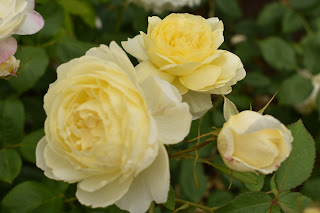 This is Rose Vanessa Bell that has been introduced this year.  It is a beaut.  All around the gardens there is the most delicious scent.  It is impossible to walk around without bending and sniffing the roses.  I found myself comparing colours, shapes and scents and then find it impossible to choose only one to be favourite. 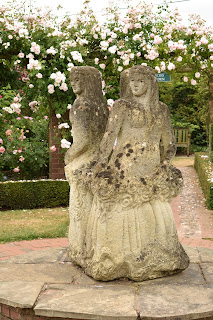 The gardens also contain many sculptures by the late Pat Austin, who was David Austin's wife.  They make an important addition to the gardens. 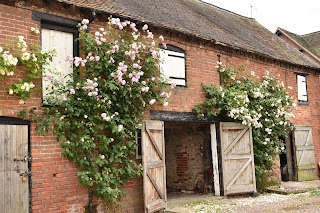 We were also privileged to be allowed to visit David Austin's private garden.  It was no surprise to see these wonderful roses climbing up the barn. 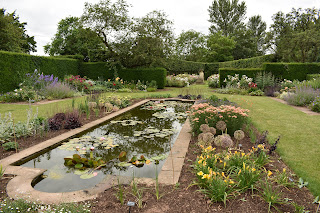 The garden itself has recently been developed and the pond is relatively new.  It was a good mix of formal and informal and at the bottom of the garden is, course, a fantastic rose garden. 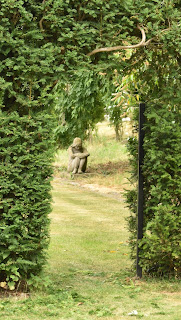 and there are more sculptures by Pat Austin that are perfectly placed. 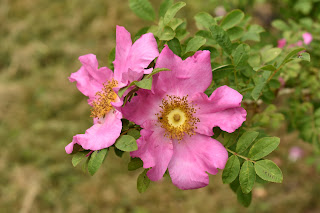 The day ended with a wander around the species rose garden, where there were so many treats to see and sniff.  The species roses have a simplicity and style that is hard not to love.  They are also adored by bees who can find their way easily into their open simple flowers. I grow species and old fashioned style shrub roses, they both have their place in my garden. 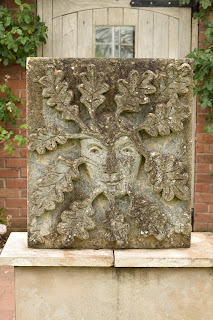