June 04, 2017
I have never visited this part of Yorkshire before, just above Hepstonstall in what was the West Riding.  It is a place of pasture and wood and the fields roll out across the valley. The nearest fields are green and on the day in question they became more blue from the mist-haze.  They eventually become the colour of grey, sun-petticoated edge of the sky, still waiting to be burned away to reveal its real blue. 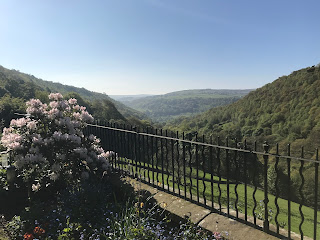 The pastures, with their ancient boundaries, unchanging through the generations are not hedged but marked by low, lichen covered walls capped with crescent shaped stones.  The air is full of birdsong, the blackbird and blackcap and the occasional rasping bark of a pheasant.

Closer are the woods of mainly native trees that cover the walls of the valley.  They are still in their fresh green new leaf with winter not yet a distant memory.  Those that stand distinct on the ridge of the valley look down on their sisters.  All of them sharing the life-giving sun.  At this distance there is no sign of the earth they are rooted in, no hint of their integral part of the network of life all around them.

There is no silence, sound is everywhere.  The wind is louder in the valley where the trees move to its rhythm.  On this high shelf where I stand it feels less than it sounds, yet still there is a cold edge reminding me that the Earth has not quite tilted enough and Spring is still upon us.

Cutting through the sounds of river, wind and bird song is a police siren, the direction and distance of which is unguessable.  The blackcaps appear to sing louder to restore their version of peace. 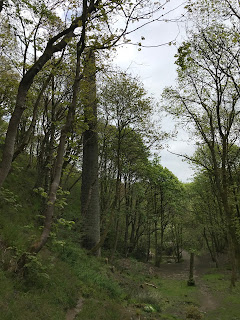 The ley-lines of older trees and tall chimneys tell us of that blink in time, when cotton was king and industry cut through the valley. Colden Water was cajoled into following a new course, the trees felled and echoes of destruction remain. 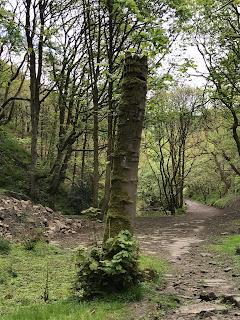 Standing together, no longer joined by what cruelly has cut into them, are the twin crowned trees.  They carry the scars of what encircled and bit deep into them. These two sycamores of equal height have been lopped to a third of their stature.  In some cruel mockery, jagged crowns have been sawn into them.  Part healed wounds gape where the saw slipped and missed its mark.  Looking along they form a line from the chimney; indicating a purpose now reclaimed by nature and forgotten. 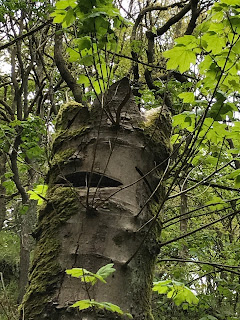 Their crowns are level with the missing bricks yet there is no clue as to what the purpose was of this butchery.  The sycamores refused to accept their fate.  Life is returning to them.  They will never be as they were, they will never recover their original shape, but they will grow and live longer than those who set out to destroy them.