June 20, 2017
I was asked a few weeks ago if I wanted to trial some Gro-Smart Ground Cover, which is made by Westland.  I hesitated a little before agreeing as I am not someone who generally mulches areas of the garden.  One look at my weed population will confirm this but I do like to have self-seeders and mulches will keep them controlled as well as the weeds.  After some thought I realised that it could be really useful in my vegetable borders where I do want to restrict self-seeders from colonising.  A short time later a bag duly arrived.

The first thing I noticed is that it is incredibly light.  I braced myself to lift the bag and it was really easy to lift.

Then I set to spreading it out where I am growing beans this year.  I am not growing a lot of veg this year but nothing beats the taste of freshly picked french beans. 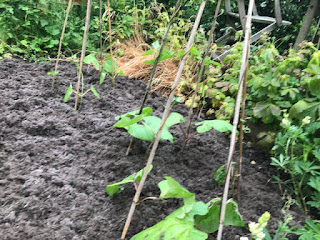 I spread it so it was a few centimetres thick as the instructions stated.  I made sure the bed was well weeded and I also picked a day after we had had quite a lot of rain.  I thought it would help to have the ground well watered before covering it over.

The ground cover is made from wood fibre and the manufacturers state it is better than bark and has about 50% better coverage.  It certainly spread quickly and effectively.  The bed took about half a bag to complete.  Apparently the fibres lock together so they work even on slopes.  Despite it being very light it has not blown around in the recent gusty days we have had. 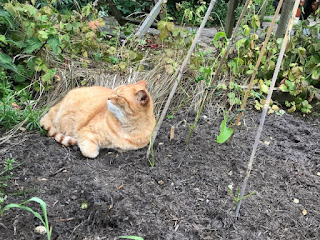 A few weeks later, and no annual weeds have appeared.  No weeds, none at all.  This is impressive.  It did not deter Bruce from sunning himself on the border, I think the fibres are quite cosy.

So I can absolutely recommend it, I might now be a mulch-convert.